I am embarrassed to be standing so close to the adverts, so I quickly type the number into my phone and move away. I ask if this is Dr Michael, explain that I want a “quick and easy abortion”. Yes, he responds, he can do that, with an extra fee for cleaning. After a few hours I start to doubt my decision, so I call him back to say that I am not pregnant, just a journalist looking for some answers.

“Okay, sister,” he responds, and promises to pick me up at the nearest shopping centre. He arrives wearing a blue jacket one size too small and asks me where I want to have the procedure done. His accent is thick, as I suppose mine sounds to him, so we struggle to understand each other. I repeat that I’m journalist, looking for answers. He hesitates, tells me to speak to his partner. A short man drives up beside us in a black Toyota. The guy in the blue coat has disappeared. I get into the car and explain myself again.

“So you are saying you don’t want the operation?”

I am taken aback. Again I explain that I am a journalist. He keeps pressing for his R200, getting angrier. I am getting uneasy, keeping my eyes on the doors in case I need to jump out.

We are still in the shopping centre, fortunately, so when he makes an excuse to leave me in the car for a minute, I make a dash for it. 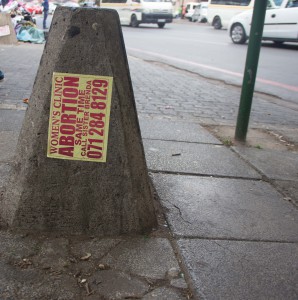 Walking along most busy streets in South Africa, your eye will fall on advertisements for a “quick and easy abortion” or a “pain-free same-day abortion plus cleaning” performed by a Dr Angela or a Dr Michael − for a small fee. Depending on which method you choose and how many months’ pregnant you are, the cost ranges from R450 to R1 000. Despite the suspicious names of these “doctors”, the dubious nature of the adverts, or the fact that some clinics offer the procedure to women at no cost, many women will ignore their gut feeling and tear a tag from Dr Michael’s poster.

The popular method these days, one “doctor” says, is pills, two of them − one to expel the foetus and one for “cleaning”.

“No injection, sisi; injection is very dangerous. Only if you have had children before we can do injection.”

“What is in this injection?” I ask.

“No, no injection − pills. Injection is very, very dangerous and it is your first child.” 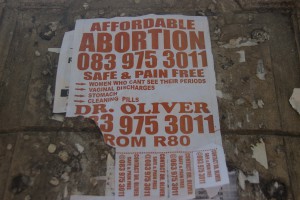 The Choice on Termination of Pregnancy Act of 1996 makes provision for abortion on demand for up to four months into a pregnancy, but almost 20 years after it was passed, dangerous illegal abortions are still rife.

“Only 54% of designated abortion facilities are operational. The national department of health acknowledges that it is not managing demand [and yet] the minister of health does not embrace that women and girls have this option as their legal right,” says Marion Stevens, gender activist and co-ordinator of the NGO Women in Sexual and Reproductive Rights and Health (Wish). “He [Minister of Health Aaron Motsoaledi] has been neglectful of this area of work. Soul City developed a public service announcement on safe abortion and he refused to have it flighted,” she continues.

Dr Sue Goldstein, programme director at Soul City’s Institute for Health and Development Communication, says that although the department of health and Soul City have a good relationship, there have been some challenges.

“We presented three public service announcements to them. Only two were selected [and] the one for abortion was not one of them,” she says. Goldstein mentions that although she is not sure whether the department intentionally avoided airing the abortion announcement, she thinks it is not as aggressive as it should be in disseminating information. “I do sense reluctance on their part to communicate information when it comes to termination,” she says.

Joe Maila, spokesperson for the ministry of health, says there is no specific budget for disseminating information about reproductive options on public platforms, and that issues are not handled in isolation. “We want people to understand,” Maila says. “We will inform people the way we deem fit, in the way we want people to understand. That’s it.”

Government has shown some initiative towards clamping down on illegal abortion clinics. In September the Gauteng department of health arrested six people for operating and giving out medicine without the required documentation.

“Women and girls often do not choose but resort to abortions. They do so in a context of fear, stigma, uncertain finances and poor access,” says Stevens. “Young people are not confident enough in these spaces to question or ask for information.”

“There is a dearth of information where termination is concerned. In terms of what people know and are exposed to, there needs to be much more communication,” adds Goldstein.

The “context of fear” Stevens mentions includes a worry they will be judged by medical health professionals. The subject of life orientation, compulsory for all high school pupils, is a space in which questions about sex and reproduction should be asked openly. But those spaces are not always where school learners find their information. 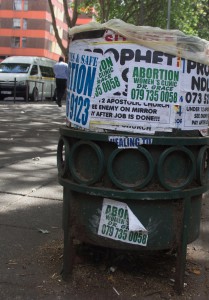 “I first learned about [contraception] from a friend who was using it, and I later learned about it in grade 12 life sciences, where it was explained in detail and scientifically,” says matric pupil Kgomotso*.

A rumour doing the rounds is that teenagers use abortion as contraception, but Goldstein refutes this suggestion. “It does happen that teenagers get pregnant and have abortions, but there are actually more middle-aged women having abortions than any other age group.”

Emma Soka, a midwife and nurse at Chris Hani Baragwanath Hospital, says more needs to be done to provide women and girls with information. “We always talk about informed choice. A person cannot make a reasonable choice if there’s no knowledge about it,” she says.

Stevens agrees: “Young girls still do not receive adequate information about how their bodies work, what forms of contraception are available, and what may suit them.”

According to the Medical Research Council, about 12% of teenagers have their first sexual encounter before age 14.

“These backstreet abortions are not right. Prevention is better than cure. [But] should you find yourself in that situation, go to the clinic. It’s legal,” Soka adds. Health workers are entitled to refuse to do the procedure, but if they do they have to provide alternative options for the patient.

“Where health workers are concerned, there needs to be better communication in terms of what their responsibilities are with regards to termination. I am aware that health workers can refuse to do the procedure, but there are protocols that need to be followed so that people have access to other options,” says Goldstein.

Soka says that even though there are some health workers who are compassionate and understanding in public clinics and hospitals, they are sometimes worn down by a shortage of staff in the face of high demand.

In addition to being given information about sex and contraceptive methods much earlier than they are now, women and teenage girls also need support, but training for health workers on sexual and reproductive health, as well as rights, is not at the level it could be. In the meantime, activists and health workers continue to hope and advocate for a more wholesome approach that considers teenagers and women’s rights, as well as attitudes towards and access to them.

All Pics by Dianah Chiyangwa