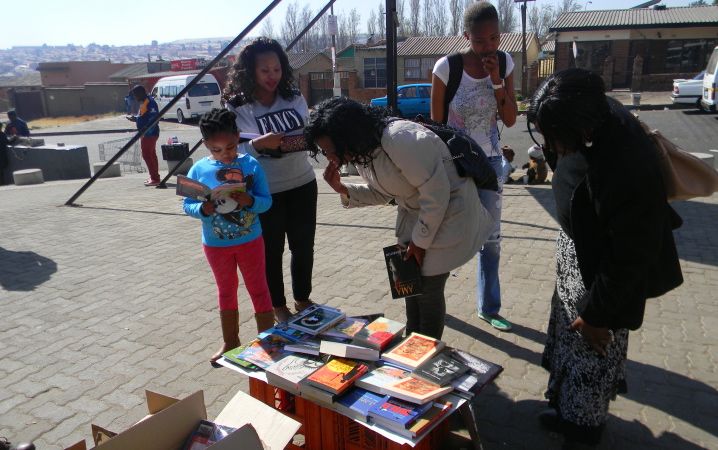 Mongane Wally Serote recently said young writers should write in African languages, and that they abandon African languages at their “peril”. His sentiments touch on an important and ongoing challenge in the publishing industry: diversity.  But accessibility is another huge challenge.

DiBookeng, which means “where the books are” in Setswana, is an initiative founded by Smangele Mathebula and Thando Nkosi that recognises and works towards addressing that challenge. Mathebula and Nkosi started the initiative to make books more accessible to communities in which people do not necessarily have easy access to them. At different locations close to public art, DiBookeng volunteers set up near street traders and give away books.

“Our main thing is not just that there aren’t enough books available in different languages and not enough books that have subjects that speak to black people, but it’s also how you reach those people. What do they think about what you are publishing? Do we enjoy having nonfiction political books? It’s the accessibility, the availability, the affordability, the distribution,” Nkosi says.

Mathebula agrees, adding that what makes DiBookeng work is that its activations are held in public spaces, which takes books to people. “You’re supposed to walk out of your house and be bombarded with the kind of books you want to read,” she says.

The publishing industry has come some way in the past two decades, with more (mostly nonfiction) literature being put out in African languages than before. Russell Kaschula, author and professor of African language studies at Rhodes University, acknowledges this, but says there is still some way to go.

“The diversity is there for English and Afrikaans, but not in African languages, where the focus is on school literature. This does not help to intellectualise our languages,” he says.

Publishing practitioners Mathebula and Nkosi use DiBookeng activations and events not only to provide books to the public for free, but to also learn more about what communities are interested in reading.

“We don’t enter into these spaces lightly, trying to undermine them. But what we learn from the people we interact with, from our communities, is that they want more of the black experience accessible in print and where they shop,” Mathebula says.

“When we were at Bree [Street taxi rank], the taxi drivers came up to us asking for books about sex in isiZulu,” Nkosi says. “You would never guess that somebody would want something like that unless you’re interacting with them and finding out about their background.”

DiBookeng’s plan is to reimagine these spaces in a way that emphasises collaboration, creating a community of readers and redefining how books are accessed. The sharing process is the main aspect. It fosters relationships between readers and opens up nonreaders to books.

The initiative’s work debunks the stereotype of black people not reading, which can no longer be used to defend the reluctance and conservative attitudes within the publishing industry towards diversification.

“Although people say we don’t have a reading culture, we do have a storytelling culture, and that provides a foundation for people who read, because storytelling as well as reading do something to your imagination. It broadens the way you see life. For a lot of us, that [culture] has existed in our homes for a long time,” Nkosi says. “People read all the time, people have stories to tell all the time, so we’re trying to encourage that being translated into daily experience.”

Mathebula agrees that the statement that black people don’t have a reading culture cannot just be accepted at face value, and must be interrogated.

Kaschula maintains a creative solution is needed to foster a culture of reading. Part of how this can be done, he says, is by making use of contemporary forms of technology, including cellphones. One way to do this is by “creating libraries in all schools as well as stocking them with books that appeal to children thematically,” he says.