Weird how media outlets quick to pontificate about the freedom of expression and the fourth estate’s right to have its say clam up like a fascist bake when they’re staring down the barrel of a protest about their own short-comings.

Last week Saturday the Right 2 Know (R2K) campaign had rustled up a few hundred protesters in Johannesburg to rail against the lack of transformation in South African media, the strangle-hold a few major print media companies have in controlling the news agenda and to question why their stories were being told inaccurately, or not at all.

This was outside the lingering ghost of Naspers; the Media24 edifice in Auckland Park.

Then, protestors from several community-based organisations and social movements marched to the South African Broadcasting Corporation’s (SABC) head office up the road to complain about, well, pretty much everything at the public broadcaster which, these days, has more problems than an angst-ridden teenager with mathematics homework.

The Con was there to guerrilla the march and inform activists about the alternative media emerging in South Africa. Yes, to speak about itself while people sang rude songs about President Jacob Zuma’s sexual appetite, which, is, really, the perfect soundtrack to be speaking about oneself to.

But, back to the fascist clam bake: Right 2 Know national working group member Meshack Mbangula addressed the crowd and confirmed that Media24 had agreed to send someone out to meet the protestors to accept their memorandum.

Then, the Big Pimping “truth to power brigade” at Media24 did a bit if a turnaround. There was a reneging of the initial commitment. An apparent decision that Media24 didn’t need a memorandum reminding them that an untransformed media landscape filled with more pale males and social conservatives than a Randburg pub during a Springbok Test match was not such a cool thing.

Cue a battening down of the hatches when Mbangula started addressing the crowds: The Media24 security closed the gates, locking the protestors out and then started filming them with their phones.

Likewise members of the South African Police Service (SAPS), renowned for such sensitive policing successes as Marikana 2012 and the Ficksburg shooting of protestor Andries Tatane.

A member of the SAPS told The Con he was filming the protestors in case the SAPS needed evidence for any potential court proceedings. Pity the SAPS aren’t filming deadline day at Media24’s various title’s as they commit successive atrocities on journalism.

Right 2 Know’s Cleopatra Shezi read out the memorandum that Media24 refused to receive and called for transformation of South African media and for more independence within its ranks.

“The media is dominated by a few voices,” Shezi shouted out, to the protestors’ cheers.

Her speech was punctuated with slogans like “Phansi media monopoly! Phansi!” and “Hands off community media! Hands off!”

The almost R250-million of public funds spent on Zuma’s private Nkandla residence and the police killing of 34 striking miners at Marikana in 2012 were referenced in the speech. As was the commission investigating the R60-billion arms deal chaired by Judge Willie Seriti, which is turning into the sort of farce that even Nikolai Gogol couldn’t dream up.

At the SABC, its chief operating officer, Hlaudi Motsoeneng was chastised in absentia. His call for “sunshine journalism” also drew the crowd’s ire.

“We want 100% accurate news about our communities,” Shezi demanded, to the applause and cheers from protestors who carried placards addressing the secrecy bill, South Africa’s pending digital migration, the lack of transformation of South Africa’s mainstream media, the concentration of media ownership in the country and the numerous scandals at the SABC involving Motsoeneng.

Some even found innovative ways to link the scandal around Zuma’s Nkandla homestead and the media industry: “Zuma pay back the money so we can get free STB,” read one.

The STBs referred to are set top boxes, which will allow viewers to access SABC and e.TV channels once the digital television signal is active.

Which is much better that getting free STDs (sexually transmitted diseases). Especially if, like The Con, one aims to be pissing into the tent, against the wind and pretty much in the general direction of a media smug with its own corpulent self-interest while cheerleading Nero’s fiddle. 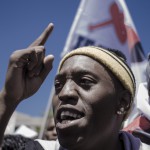 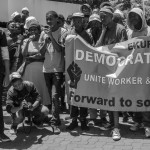 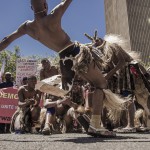 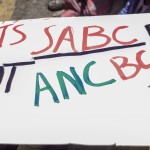 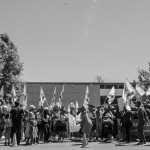 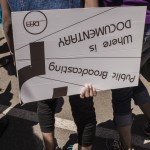 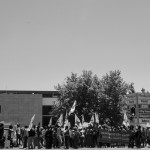 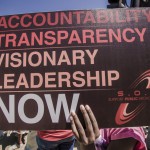