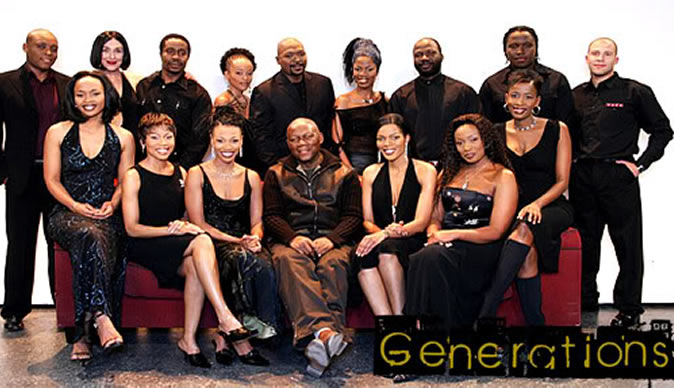 The imminent screening of the new look Generations TV series, which has been off the air since its producer fired the cast last month, should sound an ominous knell for every Black creative in South Africa.

The 16 fired actors held talks at the CCMA last week with MMSV, the production house owned by Mfundi Vundla who axed the actors after they went on strike for residual payments (which they should have been getting all along), and for three year contracts (which were promised to them by the SABC in the first place).

It is not known whether the actors will be successful in getting their jobs back, but the hype around the planned December re-launch indicates that they will not.

The re-launch, when it happens, will sadly signify that enormous amounts of public funding, and the profits generated from the use of this, can be monopolised by one private individual who can use his position to ride roughshod over the rights of actors and other creatives in the screen industry.

Generations is essentially a publicly funded production. Although it is produced by a private company, it is purchased by the SABC from MMSV on a regular basis, year after year. As such, the SABC should make sure that the actors on Generations are afforded the same standard conditions as actors in the rest of the world, instead of letting the producer – in this case, Vundla – drag down working conditions and basic rights across the industry.

Standard conditions for actors all over the world include residual payments. These are the fees paid to the actors for repeat broadcasts of their show. Generations is sold and re-screened in countless other countries, and has been for years. As the Generations Actors Guild has correctly pointed out, there is nothing “far-fetched” about expecting a tiny share of the money that these repeat broadcasts generate for Vundla.  That the Generations actors get no residual payments begs the question – who is getting all the money?

Residuals do not eat into a producer’s profits because less than 5% of the total revenue generated by a TV series is given back to actors in residual payments. That is not 5% per actor but a pool of usually 2% or 3.6%, which is shared among all the actors with speaking parts on the series. Given that similarly tiny pools of the revenue are set aside for directors’ and writers’ residual payments, this still leaves a massive chunk of the total revenue in the pockets of the producer. It is unreasonable of Vundla to expect to keep 100% of the total revenues generated by the show instead of being content with 80% or so.

Sometimes, the actors can earn very little in any one year from residuals. But the principle is that residual payments, which can keep coming for years after actors have been written out of the show, allow the actors to continue working creatively – often in independent, low budget theatre or film where they mentor and support newer actors.

The SABC has supported Vundla in riding roughshod over the actors’ rights apparently to send a message to other actors that they should not hope for the same conditions as actors in the rest of the world. In the 1990’s, the SABC and the former actors union, Performing Arts Workers’ Equity (PAWE), signed a television performers collective agreement giving actors the right to share a pool of 2% of total revenues generated by repeat broadcast fees. The SABC should insist that this clause be included in all contracts used by producers making shows for the SABC, until such time as a new contract can be negotiated. There are current negotiations, but the Generations Actors Guild and Creative Workers Union of South Africa are not represented in these – only the SABC, producers and the newer South African Guild of Actors, which does not represent the Generations actors.

The mass dismissal by Vundla is something that used to happen in Hollywood in the 1920’s – almost 100 years ago. So Vundla’s refusal to pay residuals is almost one century out of touch with modern thinking. That he was willing to fire the actors who went on strike and take the show off the air – with the SABC’s blessing – is another huge problem. The draconian move has also cost the cash-strapped public broadcaster money, according to media reports which indicate that the show temporarily replacing Generations is earning 40% less money for the public broadcaster because it has far fewer viewers and so cannot charge as much for TV commercials during the ad breaks.

It is a losing situation for everyone except Vundla, who is taking the opportunity not only to cling on to 100% of the profits, but to replace the assertive, experienced actors with a much younger cast. “Going younger” is an old producers’ trick done not to give a show a fresh look, but for the purpose of hiring newer, less confident actors who can be paid far less. These younger actors, generally, are likely to be so thrilled that they have landed a regular acting job on a major TV series that they will accept more onerous conditions in their contracts than established actors.

This sad chain of events has happened because there is no consistent government plan to make sure that Black South African creatives flourish. There are ad hoc approaches to different aspects of the industry with no visible common thread to bind the screen industry together.

For example, there needs to be a government plan to nurture aspirant Black filmmakers who have no money at all. The department of trade and industry (DTI) recently launched a R1 million South African Emerging Black Filmmakers Incentive Programme, which offers a 50% rebate to Black filmmakers who make films on a budget of R1 million. The catch is that these filmmakers are not allowed to raise the entire R1 million through public funding bodies, but have to use at least R200 000 of their own money, or find a private investor to cough up this sum.

Given that a R1 million budget film may never make any money on the market, even though it tells an important story, even filmmakers with prior experience in making no budget or low budget productions may find it very difficult to raise R200 000 through a private investor. This is also a large sum of money, which is not easily ‘crowd funded’ through donations from friends, family or supporters.

Government could make the argument that filmmakers with no money at all are already supported by the National Film and Video Foundation. However, this funding is limited, therefore hotly contested and is given to filmmakers of all races, not only Black filmmakers.

It has become a cliché of sorts to blame the government for everything, but the governance of the South African screen industry is inconsistent at best, and chaotic at worst. It makes no sense for the department of Trade and Industry (DTI) to be coming up with new plans to support Black filmmakers, while leaving others out in the cold. At the same time, the SABC’s endorsement of the oppressive and heavy handed axing of some of the country’s best known Black actors further undermines the advancement of creative Black South Africans.

A nonprofit news agency promoting social justice. Seeking answers to the question: How do we make democracy work for the poor? http://sacsis.org.za/ View all posts by The South African Civil Society Information Service →