“…yet, unbeknownst to him, it had been kept alive – and it was only now, in listening to Deeti’s songs, that he recognised that the secret source of its nourishment was music: he had always had a great love of dadras, chaitis, barahmasas, horis, kajris – songs such as Deeti was singing. Listening to her now, he knew why Bhojpuri was the language of this music: because of all the tongues spoken between the Ganges and the Indus, there was none that was its equal in the expression of the nuances of love, longing and separation – of the plight of those who leave and those who stay at home.”

Gaiutra Bahadur’s book, Coolie Woman: The Odyssey of Indenture, arrived on my desk a fortnight ago. It was a surprise gift from my husband. I had been meaning to read Bahadur’s book since it was published a few months ago. When it arrived out of the blue I thought that, with all the work deadlines rushing towards me, it would be a few weeks before I could start reading the book. But when I opened the box there, on the cover, was a sepia photograph of a woman who looked uncannily like my grandmother staring back at me. The image, simply titled ‘Coolie Women’ and preserved for more than a century, shows her staring directly at the camera with defiant strength. As I stared back at her bejewelled countenance, I was drawn to her melancholic eyes that seemed to want to tell me a story of how she came to live on the other side of the world, among strangers, fleeing old hardship for new. I wanted to know more about this woman and the women like her whose stories, murmurs now, have slipped through the pages of history. I was compelled to start reading Bahadur’s book that very night. 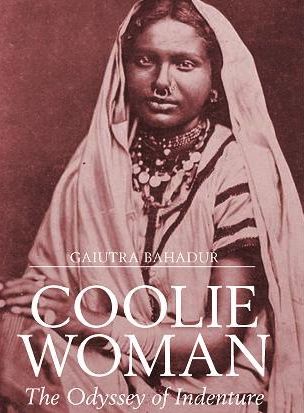 Bahadur seeks to resurrect the stories of women who travelled halfway across the world to get a chance at a different life. By tracing the story of one woman, her great-grandmother, Bahadur has created a detailed account of the lives of these indentured travellers. I don’t care much for the first two chapters of the book, which mainly deal with the recent past and Bahadur’s own life. But it really picks up once Bahadur begins to trace the journey of her great-grandmother, Sheojari.

Sheojari set sail from Calcutta on 29 July 1903 to labour on the plantations of Guiana. A now decrepit colonial document states that she was a pregnant Brahmin woman travelling alone, and that she came from the village of Bhurahupur in the police district of Majhi in the province of Chhapra in the state of Bihar. More than a century later, Bahadur went back to this hamlet in search of her ancestor. While she managed to travel a windy dirt path to her ancestral village, and to meet possible descendant of Sheojari’s family, the trip, as is so often the case with these kinds of journeys, did not allow her to develop any deep connection to the village or her possible relatives. But what she was able to do by following the odyssey of her great-grandmother is to uncover the history of the lives of a group of women who are largely excluded from the pages of history.

This is the strength of the book. Its importance does not lie in Bahadur’s personal journey of exploration but in the larger story she excavates with the careful eye of a historian to provide us with, as Pankaj Mishra writes, “an imperial history of violence and uprooting”. As her personal story quickly turns into a transnational history of the women who crossed the Kala Pani, the black waters, to labour as indentured workers across the British Empire, it becomes an illuminating study of how an empire was built on the labour of the dispossessed. As Mishra also notes, Bahadur does not write “a simple account of victimhood”. As with so many stories of how the modern world came to be, this is a tale of both oppression and liberation. Our world was made by empire, but it was not made by people who were all powerful against people who were entirely powerless.

From the 17th century, the sugar plantations of the new world were worked by enslaved workers, first from Ireland and then Africa. The Haitian Revolution of 1804 began the process of ending slavery, which was finally abolished in the British Empire in 1833. The following year, the system of indenture was set as a supposedly more humane alternative to the slave trade. As we in South African know all too well, when systems of oppression are not entirely uprooted they tend to reengineer themselves rather than to undo themselves in response to resistance.

The first shipment of indentured labours who set sail from Calcutta to Guiana left in early 1838, on board the Whitby, to labour on the sugar plantation of John Gladstone, a Tory MP, businessman and father of the future British prime minister William Gladstone. The fortunes of the political class in Britain were deeply implicated in the exploitation of the colonies in terms of human labour, the appropriation of land and other forms of wealth. Their tentacles continue to reach into their former colonies, and exploitation and extraction continue. In our own country, migrant labour from the Eastern Cape continues to produce destitution and silicosis in one part of the land, and wealth, good health and power in another.

The empire assumed labourers taken from India to Guiana, the Caribbean islands, Fiji, colonial Natal and Mauritius would voluntarily sign agreements to work on the sugar plantations. The agreement that these women and men signed came to be called a “girmit” by the indentured labourers, a version of the word “agreement”. In time, the labourers came to use it to refer to themselves as the “girmityas”, those who had signed away their labour. Although the system of indenture included some mechanisms to protect the indentured from certain forms of abuse, the reality of indenture was usually rooted in dispossession, coercion and brutality.

Bahadur discusses the variety of ways in which women and men came into indenture. These included desperate responses to dispossession and social exclusion, as well as kidnapping and various forms of coercion and deception. Many people were either tricked or forcibly recruited into indenture by labour brokers who scoured the villages north of Bengal for vulnerable individuals. One such example, from many, was the story of a widow making her way back to her own family after she had quarrelled with her in-laws. She met a stranger on the road who promised to show her and her five-year-old son the way back to her village. But instead, the stranger, a recruiter, stole all her jewellery and belongings, and put her on a train to “coolie depot in Calcutta”.

Many of the women who entered into indenture were widows, prostitutes, or were looking to escape unhappy marriages. They were often outcasts, many of them desperate for a different life. In 19th century India, widows were often treated like untouchable fallen women. According to Bahadur, this was so entrenched in the culture that word for widow and prostitute in Bengali and Bihari is the same as prostitute, “randi” or “ranri”. Interestingly, Bahadur also argues that while the percentage of women making a living from prostitution in India rose from 3% to 7% during colonialism, Victorian ideas about sexuality cast this profession, which had an acceptable social function in precolonial Indian society via roles such a royal courtesans or temple devdasis, as criminal and morally corrupt. The colonial economy resulted in increasing destitution, and at the same time colonial legislation governing prostitution meant that women making a living in this way were subject to increasingly oppressive conditions. As a result, many turned to indentured labour to seek out a better life. Bahadur also points out that the laws around sexual morality were often first worked out and experimented with in the colonies. A few years later they would appear in the metropole. This argument speaks to the growing understanding of how the colonial world, and in the contemporary world the global south, has often functioned as a testing ground for many of the interventions that later get used in the north.

Bahadur also shows that indenture proved to be a disaster for so many rather than new hope. It was often a passage to alcoholism, mental illness, prison, violent death, and the impossibility of returning home after breaking caste by crossing black waters. But this was not the whole story. For the indentured labourers, life on the plantation was made up of series of compromises and sacrifices. But there was also progress, love, renewal, longing and ingenuity amid the back-breaking work. Young women and men often developed relationships before boarding the ship. There was love and tenderness. But many young women were forced into relationships with older or more powerful men, and rape, on the ship and on the plantation, was routine. Women were often victims of violent crime, rape and hardship, but many managed, despite these difficulties, to negotiate advantageous relationships as well. Given that women were in the minority in the colony, they often found themselves desirable in this new world and could negotiate better relationships with several men and choose their best options from a range of available possibilities. It was not unusual for indentured women to develop relationships with plantation owners or overseers in a context where caste mattered very little, and racial convention was not always strictly adhered to.

Despite the difficult years of labouring under indenture, many managed to endure it and work themselves out within a few years. Although social and economic hardship often continued through the generations to follow – as it still does for many of the descents of indentured workers in South Africa today – these migrant labourers remade their lives in novel ways, drawing on the religion, language, food and culture of the old world but adapting to new conditions.

The story Bahadur weaves for her readers is not only important for the descendants of Indians indentured in Guiana and across the Caribbean, or closer to home in Mauritius or colonial Natal. This is a story of how colonialism made the modern world, and of how some of the women who laboured in foreign lands worked to build the wealth that still sparkles in the enclaves of opulence and power from London to La Lucia. This is a complex story about our complex past that offers little to the often crude nationalisms that, from Guiana to Fiji and South Africa, not to mention India, are emerging in response to inability to really decolonise our societies. Those who wish to find romantic myths in the past to power deeply conservative ideas about the present, and the role of women in an imagined future, will find little to work with here. What this book does show, and what history always shows when it’s examined properly, is that the past was just as complex and messy as the present. But it also shows that in that messy complexity there is, then as now, resilience, innovation, renewal and courage.