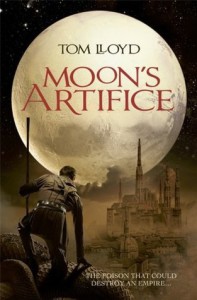 After the successful – and protracted – Twilight Reign series, Lloyd has turned his attention to the mystery detection trope in this, the first volume of his next series.

Noir-standard mid-level detective, Investigator Narin, works in an imperial city drawing elements from mediaeval Japan: rigid etiquette, worship, and martial arts protocols constraining warring, clan-based monopolies unsettled by economic change. Narin has built his career by keeping his head down, but that becomes increasingly difficult as he tries to manage an unwise love affair and a case that starts small with the death of an apparent thief but escalates rapidly.

Soon Narin and the usual unlikely bunch of allies – a feisty fisher-girl, a grizzled veteran who is (of course) more than he seems, a heroic but infuriatingly perfect commander and an enigmatic historian – are facing a bid to seize power riddled with the illicit use of magic. Lloyd manages the trope and its conventions well. Though there is undoubtedly at least one deus in machina, gods and magic are not employed (as too often in this sub-genre) as a pretext to skip the engrossing processes of detection.

The fights are vivid and, by the end, the main characters have made their mark on a reader’s heart. But only by the end; Moon’s Artifice is a slow starter with rather too many walk-ons (most of whom end up dead) blurring its outlines. It’s worth sticking with the tale though; the Twilight Reign series demonstrated that Lloyd’s plot- and world-building needs space to grow, and can end up addictive.