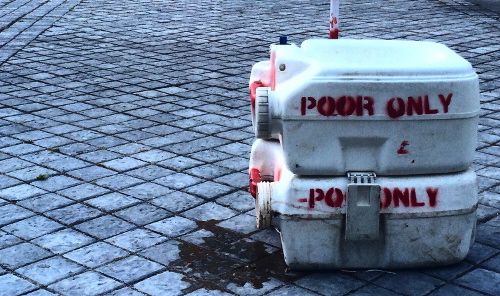 Several Cape Town landmarks have been defaced in recent weeks. Here members of The Tokolos Stencil Collective explain why they have done this.

Last week members of the Tokolos Stencil Collective emerged from the decades old cultural hub (but increasingly sanitised and gentrified) community of Bo-Kaap in Cape Town, carrying with us a portable toilet known to Cape Town’s poor residents as a “porta-porta” or a “laptop”. The toilet had been donated by residents earlier in the week of one of Cape Town’s labour reserve camps, usually called “townships”.

This inhumane form of sanitation was taken to the Brundyn+ Gallery, one of Cape Town’s largest gallery spaces, as part of our installation in their Pakkers opening exhibition on artistic dissenting voices in the city. The toilet was laid down in the center of the gallery floor. It called upon onlookers to participate in our artistic distruptions by appropriating the stencil we scattered around it. In front of the porta-porta, we placed a single line reading, “there are none as invisible as those who wish merely to be seen”.

Before leaving, we removed the toilet’s lid and exposed art aficionados to the smell of decades of indignity and oppression meted out against Cape Town’s poor. The stench of shit filled the gallery space. Irked by the presence of such an unwelcome guest, gallery management moved quickly to dispose of the piece, lest their opening be marred by the smell of South African poverty.

The oppression of poor blacks was once again rendered invisible.

The previous evening, Tokolos had been sanctioned guests at the Brundyn+ Gallery invited to participate in an exhibition displaying work from dissenting voices in Cape Town intended to engage the public in a conversation around the exclusionary city landscape. However, placing our work on a sanctioned wall to entice an elite class of gallery goers is not exactly how we choose to operate.

Instead, members of Tokolos distracted our gate keeper and proceeded to move throughout the gallery space, putting up our work where it was needed. When all had gone off to their warm beds on a quiet Guy Fawkes evening, we returned and bombed the front of the gallery wall with the words “Bourgeois Gallery”, “Dehumanisation Zone” and stenciled in our alternative and more appropriate Cape Town logo. The next morning, GroundUp published an article on these very pieces putting Brundyn+ managment in the unfortunate position of having to allow our graffiti to remain for the exhibition lest they be called out for publicly censoring their own call to conversation.

However, it was the placing of an actual instrument of poverty and oppression within the gallery walls, that resulted in immediate censorship.

The intention of our ‘Non-poor Only’ stencil sprayed directly onto the “porta-porta” was a critique of the highly problematic nature of the Brundyn+ Gallery and bourgeois spaces like it across South Africa.

While these spaces import artistic works from around the globe which are often times highly critical of prevailing hegemonies, they have illustrated a complete lack of interest in opening the conversation to the black underclass. These sanitary spaces serve not only to exclude the majority of South Africans, but also to reaffirm and sustain the current climate of injustice.

To the professional art world, you can critique but you cannot physically challenge oppression.

Instead of taking the opportunity to invite the oppressed to express their lived experience of impoverishment and struggle, galleries like Brundyn+ continue to fall into the colonial legacy of reifying elite spaces in which black and poor bodies are fetishized for a so-called progressive upper class which has little or no experience with the extreme levels of structural violence that most South Africans live through everyday.

These systemic issues become, at best, a dinner time conversation for a class who purchases and removes valuable work from public spaces, deciding on their value and place in society.

Art which was previously vital to challenging oppression –art played a key role in the struggle against apartheid– is transformed into commodified material objects which serve to further entertain elite enthusiasts without disrupting the wall of segregation that they hide behind.

With this in mind, Tokolos made no claim to professional artistic intervention. We are not engaging in this conversation as artists but as an anonymous and universalised image of the worker wearing gas masks and blue overalls, and carrying our luggage of shit to disrupt spaces in which poor blacks are not welcome.

Real art, which is the dialogue around inhumanity, white supremacy and capitalist patriarchy, cannot simply be relegated to the ivory tower that is the bourgeois gallery, sanitised and stripped of any opportunity to affect the lives of those people of which it speaks.

Real art is public property, placed in public spaces so as to inform and radicalise the lives of all communities and to disrupt those who live behind the literal and figurative walls of oppression.

In a space where salient issues such as the Marikana massacre, the struggle of landlessness farmworkers and urban movements for decent housing are swept under the rug of media hype and government bureaucracy, alternative narratives must be carved out of the city landscape itself.

It cannot be possible that, on the one hand, Cape Town retains its plethora of white supremacist statues profiling assholes such as Cecil John Rhodes and Jan Smuts (which Tokolos have and will continue to deface). And yet, on the other hand, we lack any real public art which acknowledges and honours the on-going struggle for freedom in this country by poor blacks who have aligned with contemporary martyrs such as Mambush, Andries Tatane and Thuli Ndlovu.

The recent Mandela memorial piece –an expensive advertisement for Ray-Ban sunglasses– erected on the Sea Point promenade is a testament to government’s on-going refusal to publicly engage with the realities of modern South Africa. Instead, it fantasises around a mythological rainbow nation relegating justice and freedom to a struggle for another era. Yet even political art that has been co-opted into galleries, has the same effect of pretending that we live in some democracy where everyone has their say.

Real art makes those with privilege feel awkward and self-conscious. It destroys – even if for only a few moments – their bubble of self-affirming comfort in which they live their lives.

And, on the other hand, real art makes sympathisers complicit in resistance.

The Tokolos Stencil Collective action statement is this: “To terrorise the powers that be, the tokoloshe emerges from from obscurity. It reminds South Africans, young and old, that freedom and justice remain illusive unless we are willing to fight for it.” GroundUp prefers not to publish anonymously written opinion, but we made an exception for this.

The Con is in the process of negotiating an interview with the Tokolos Stencil Collective, check back soon for more.