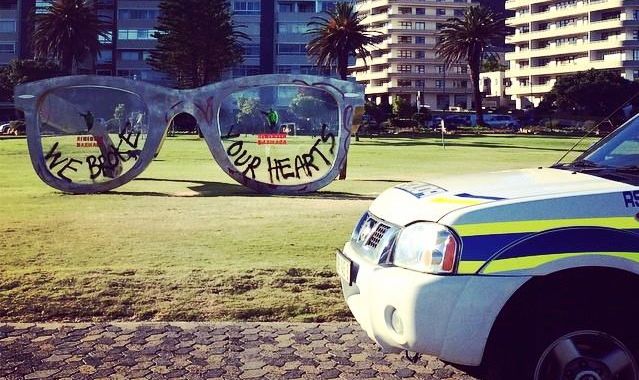 No art is safe in South Africa, especially “myopic art” made by middle class white artists from Cape Town.

Visitors to the sunglasses this morning will see a transformed piece of public art.

The phrase “Myopic art” is stenciled in red along the sunglasses’ arms, and on the lenses the words “Remember Marikana”, with an image of Mgcineni Noki, the leader of the striking Marikana miners who has become known as “the man in the green blanket”.

Beneath the Marikana stencils is written, “We broke” on the right lens and “your hearts” on the left. 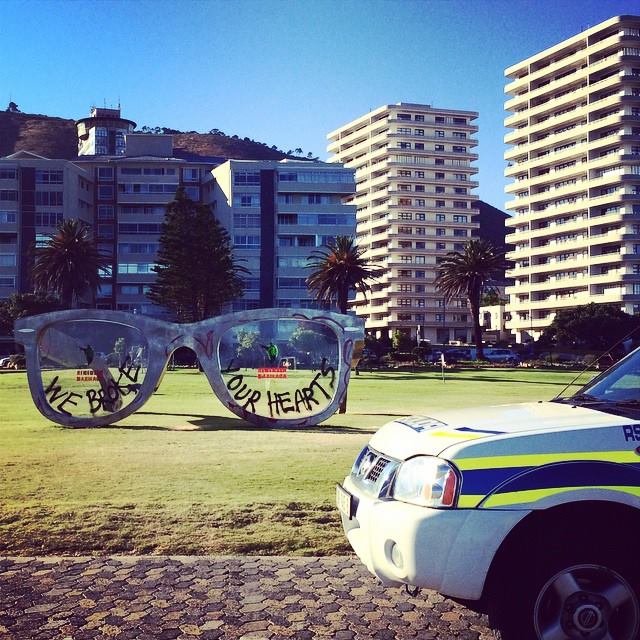 “#myopic society Ray-Ban Madiba speaks to a society that does not see. A tokolos has given the atrocious piece of art some lasik. May we all remove our myopia. Aluta continua!” 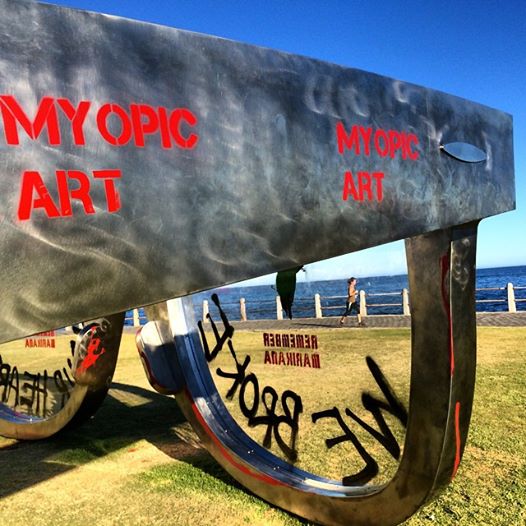 On their TUMBLR they wrote:

“NOW YOU CAN SEE

Tokolos Stencils intervenes in white supremacist corporatist art. Myopic art leads to and is a reflection of a myopic society. But on the master’s sunglasses, there is always space to broaden our vision so that we can all see the bigger picture.

Only the tools of interruption and resistance will every be able to assist the people in dismantling the master’s house.” 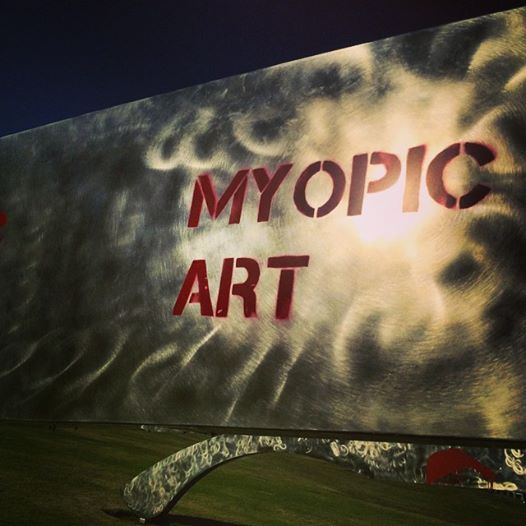 Elion’s 1,2-ton stainless steel giant sunglasses, which are titled “Perceiving Freedom”, were erected on the Sea Point Promenade as part of the public art initiative Art54, with the support of World Design Capital.

The  sunglasses reportedly cost R200 000 to create and was partly paid for with public money.

Elion erected a plaque featuring a picture of Nelson Mandela wearing similar sunglasses, which were not Ray-Bans, on Robben Island, and the sunglasses are directed to look out in the direction of the island. 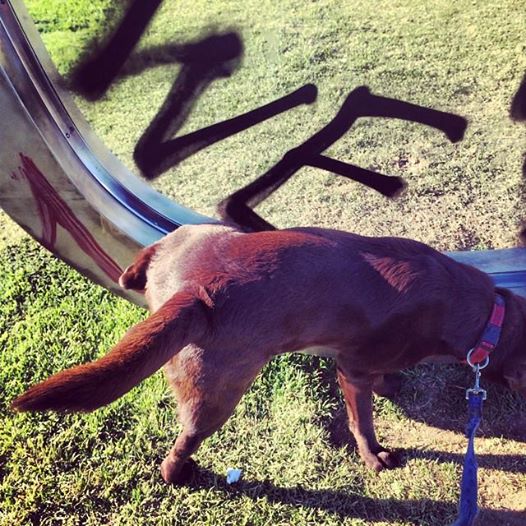 Elion’s artwork has been heavily criticised on social media, mainly for its appropriation of Mandela while at the same time commercially associating his name with the Ray-Ban brand, which clearly assisted in funding the artwork. 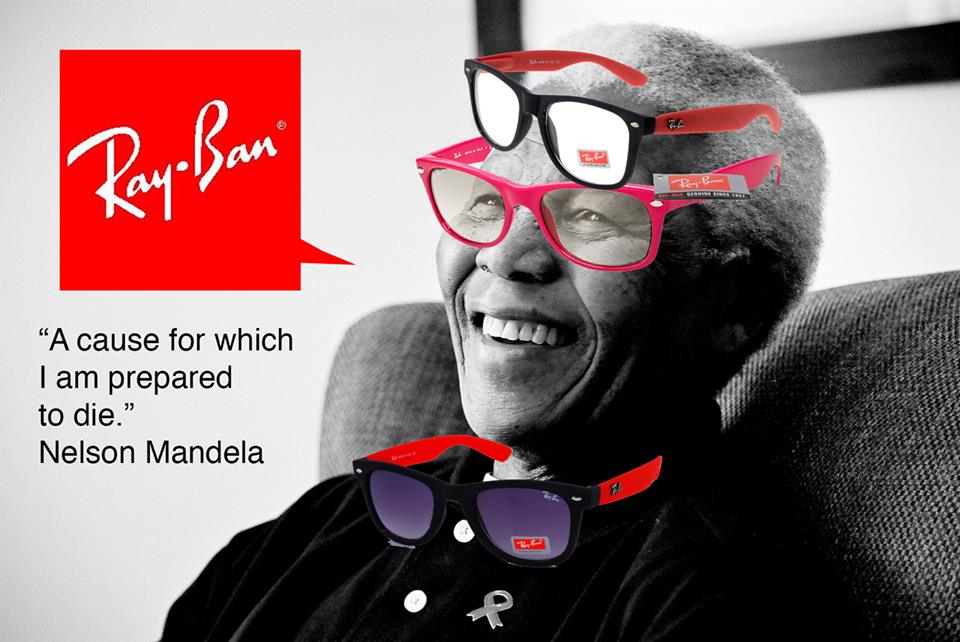 Some even attempted to digitally vandalise the sunglasses, creating images of the with seagulls shitting on them, a giant nose and eyebrows on them, and a firemen putting out a fire caused by the sun reflecting through their lenses. The City of Cape Town has stated that when the work was approved there was no link to either Ray-Bans or Mandela. 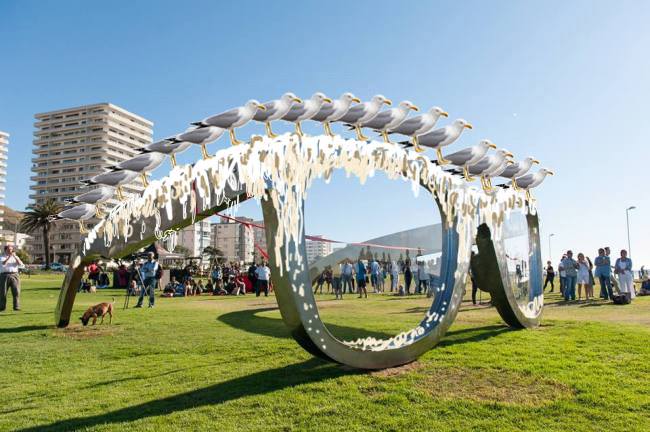 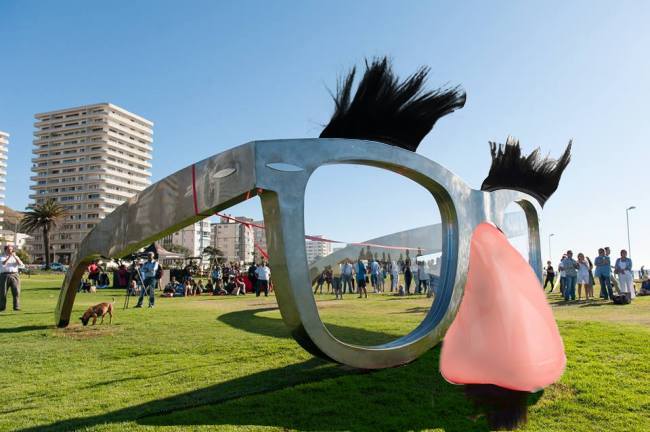 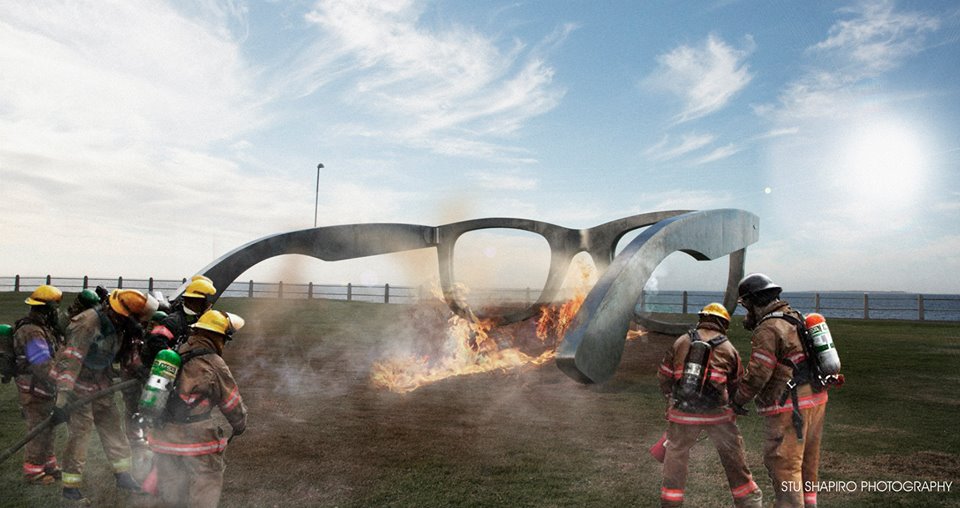 In an interview with City Press published last Sunday, Elion said Mandela came into the thinking around the piece very late in the day.

“When I visited the site, I realised the glasses would practically be looking straight at Robben Island, and it seemed like something that would be foolish not to acknowledge,” he told City Press. “A lot of the criticism has been around the fact that Ray-Ban, a corporation, is operating in what is meant to be an advertising-free zone, and then to capitalise commercially on Mandela.”

“I approached Ray-Ban, not the other way around,” said Elion.

In the interview, Elion said the reason he was getting a lot of criticism was because he was “a privileged white person placing art in a privileged, predominantly white, area”.

He said he didn’t think a black artist would get as much criticism. But in commenting on why there were very few black South Africans when defending his work on Facebook, he wrote, “I have very few black Facebook friends and very few in real life, and that has to do with my environment, not my choice.”

The quote seems fairly indicative of the race divide in Cape Town society.

The Tokolos Stencil Crew recently made headlines through their interaction with and tagging of the Brundyn+ Gallery in Cape Town.

The crew had been invited to be part of the gallery’s Pakkers exhibition, which aimed to highlight dissenting artistic voices in Cape Town.

On the day of the exhibition opening, the gallery staff arrived to find the space had been graffiti’d; the words “Bourgeois gallery” and “Dehumanisation zone” had been stenciled on the outside wall. 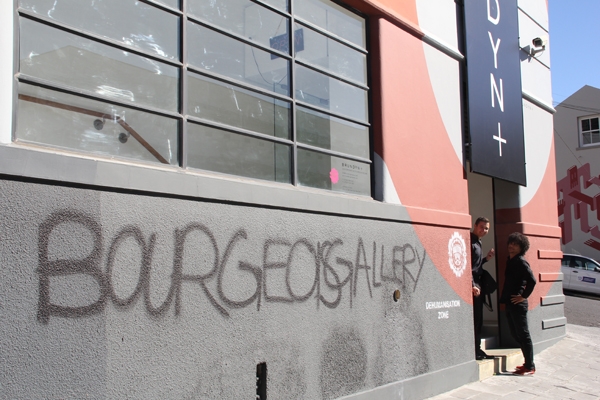 That evening, Tokolos occupied the gallery carrying a portable toilet, known to Cape Town’s poor residents as a “porta-porta”, which was laid down in the centre of the gallery floor.

Before leaving, Tokolos removed the toilet’s lid and exposed the audience to the smell of shit.

According to a statement Tokolos released, the gallery management moved quickly to dispose of the piece, “lest their opening be marred by the smell of South African poverty”. 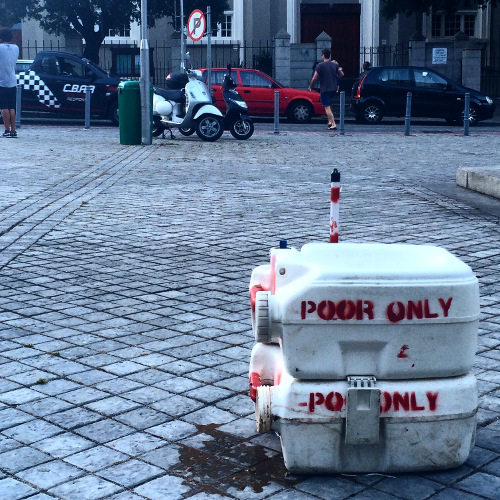 “The oppression of poor blacks was once again rendered invisible,” read the Tokolos statement. “The intention of our ‘non-poor only’ stencil sprayed directly on to the ‘porta-porta’ was a critique of the highly problematic nature of the Brundyn+ Gallery and bourgeois spaces like it across South Africa.

“Real art, which is the dialogue around inhumanity, white supremacy and capitalist patriarchy, cannot simply be relegated to the ivory tower that is the bourgeois gallery, sanitised and stripped of any opportunity to affect the lives of those people of which it speaks,” read the Tokolos statement.

“The recent Mandela memorial piece –an expensive advertisement for Ray-Ban sunglasses – erected on the Sea Point promenade is a testament to government’s ongoing refusal to publicly engage with the realities of modern South Africa.

“Instead, it fantasises a mythological rainbow nation, relegating justice and freedom to a struggle for another era. Yet even political art that has been co-opted into galleries has the same effect of pretending that we live in some democracy where everyone has their say.”