On that morning in April, graf artists had been moving up and down the giant pillars supporting the M1 highway in Newtown painting the town red. And blue. And black. And whatever other colour palette their Montana spray paints allowed. By the end of the day, there were complete pieces rendered by Jozi’s graf artists, revered and unknown alike.

There was a sense of newness mixed with a sinking feeling of desperation from not knowing what the Newtown Mall, then under development, would mean for the ritual. Would it still continue when the mall was fully operational, or would the City prohibit any paint-related activity?

Painting the pillars with new pieces had become a yearly occurrence during Back to the City, an urban festival which happens on Freedom Day and features music performances, food and clothing stalls, and about 15 000 people seeking stimulation. 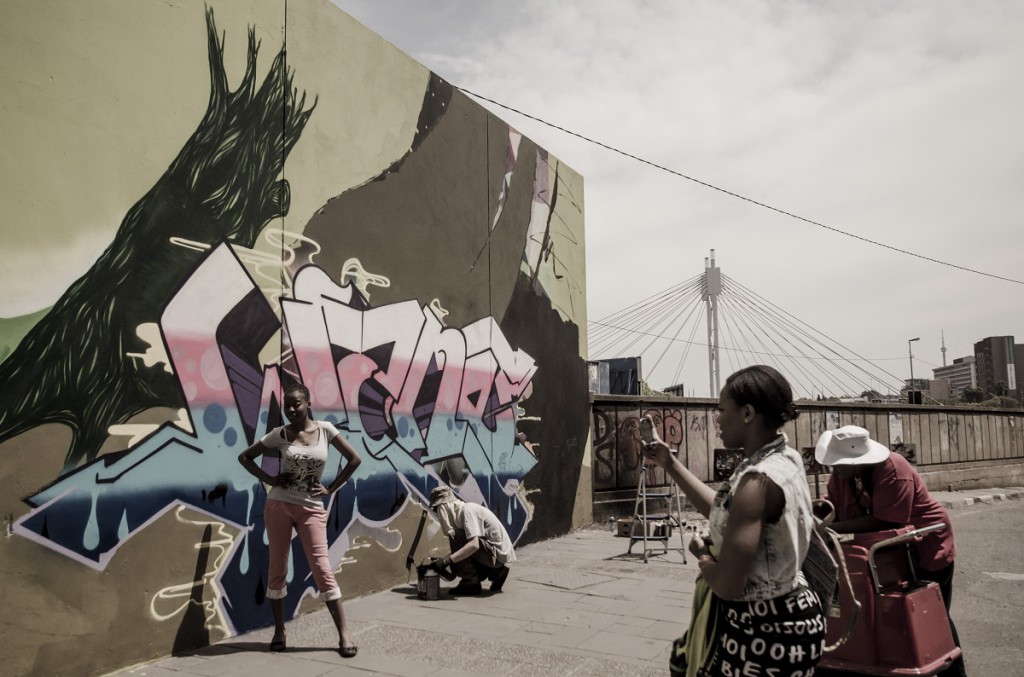 In the months since April, people of all sorts have interacted with the art on some level.

There have been tourists and ‘Grammers keen to leave with a portion of inner-city beauty; religious adherents returning from church on Sunday afternoons; construction workers; and recyclers like Mpho, who didn’t want to give his last name. He’s from White City in Soweto and earns a living from collecting boxes and exchanging them for some change at a depot nearby.

He becomes immediately animated when the focus shifts from him and how he earns his living, to the graffiti. He speaks of an artist who offered to spray paint his carriage one day and how that made him happy. Brazillian artist Mundano’s Carroceiros project immediately comes to mind. Mudano was in the country recently talking about his project, which has helped change negative public perception towards recyclers in Sao Paulo.

Mpho points at his favourite piece on the pillars, a psychedelic rendition of a woman’s face painted in purple and blue tones, and says that he just likes how “far out” it looks. 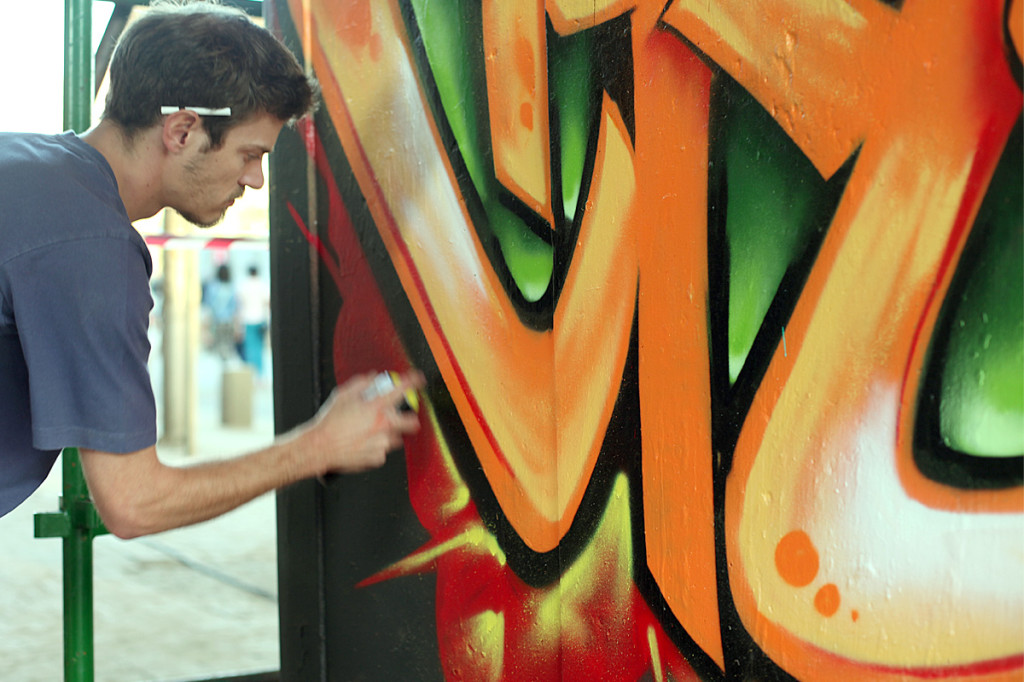 How do people in different settings across the city relate to public art?

A shoemaker, who was also reluctant to share his name, set up shop directly in front of the pillars in Newtown. When asked, he expressed no interest in the colourful shapes and figures in front of him. He no longer even notices them.

Bongani Mukhari, a student who also handles PR for a corporate client is sitting at a coffee shop in Braamfontein – about 10 minutes’ walk from the graf art in Newtown. Mukhari is a member of Troublesome Kids, a fashion-conscious collective hailing mostly from Pretoria.

“We always meet this side on weekends. I’m from the Jozi side; I wanted to break boundaries [by] making two [cities] collide,” he says.

Mukhari’s thoughts about art are intertwined with his place not only as a young person in the city, but as a black creative seeking signifiers and symbols that validate his right to occupy spaces such as Braam’s gentrified sections.

“It’s more black people trying to tell us what they’re feeling inside,” he says.

“A majority of the art is done by black people,” he continues.

Is public art race-specific? Can he back up his claim?

“I know this for sure. I’ve been in the market,” he replies. 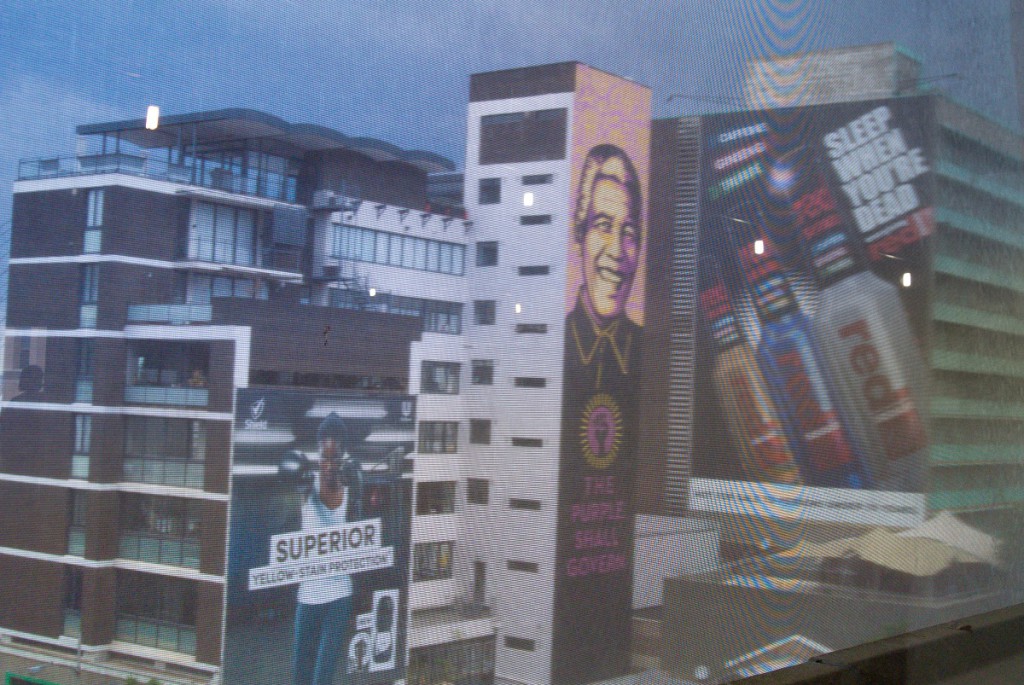 Illustrator Sindiso Nyoni’s (R!ot) is all too familiar with racial bias, having started out in the advertising industry before deciding to zap it and pack it in favour of the indie life. He now gets regular work through big-name clients such as Adidas and Puma. Still, he’s not impressed.

“[The industry] is bigger than we think it is. There are similarities everywhere, whether it’s in fine art, advertising. It’s clear, if you’re black, it’s gonna be much harder for you to crack it or to get cool gigs than it’s gonna be for another guy who’s equally as talented as you, but happens to be white. That’s the way it is.”

Race representation in art, despite being discussed on innumerable public platforms, remains a deep-seated problem in the city. It owes to South Africa’s apartheid past, but perhaps it’s time the legacy is addressed with words that don’t aim to only silence dissenting voices in order to maintain the status quo.

R!ot says that it’s why he decided to go solo.

“I also wanted to put my name out there and get recognised for the work I’m doing.”

Big brands have also played a part in commissioning public art pieces across the city. Two years ago, Adidas brought artists into the inner city to paint. Just last month, the renowned illustrator Shepard Fairey was in town to paint a mural of Nelson Mandela in Braamfontein. Henesssey were responsible for that.

R!ot comments: “I understand that [Henessey] commissioned him to create limited-edition packaging, and that it got him to do a wall here. But it feels like there’s a lot of that kind of stuff happening.”

R!ot is talking about the fact that there are many local “dope cats” being ignored for big jobs, which go to foreign artists instead.

By all counts, Nolan Dennis easily falls into this “dope cat” category. His work, highly detailed, proposes alternative futures by mining data from our collective past. His interest lies in what he terms “social fiction”, which he describes as “mapping the contours of our highly coded human environment, reading the signs / ciphers / markers of blackness in thisness, the mechanics of imaginary topologies and the collapse of social certainty”.

He reckons public art is democratic by virtue of it being public.

“Objects in the public realm are democratised in that people can reread, appropriate and redefine the meaning of the work. The public can discard the artists’ intentions and project their own. Public work should belong to the public,” he asserts.

Dennis makes the case for public art having to, at least in a South African context, challenge the status quo of a space as defined by race and class privilege. To him, “any work that does not resist or undermine the status quo of any specific site does not qualify as public art. Rather it acts as a means to maintain, define and celebrate the segregation and privatisation of public space – which in South Africa is defined on a racial basis. It’s bullshit to call these kinds of things ‘public art’ – they are just objects in a long history of commodifying public space. The tragedy of the commons.” 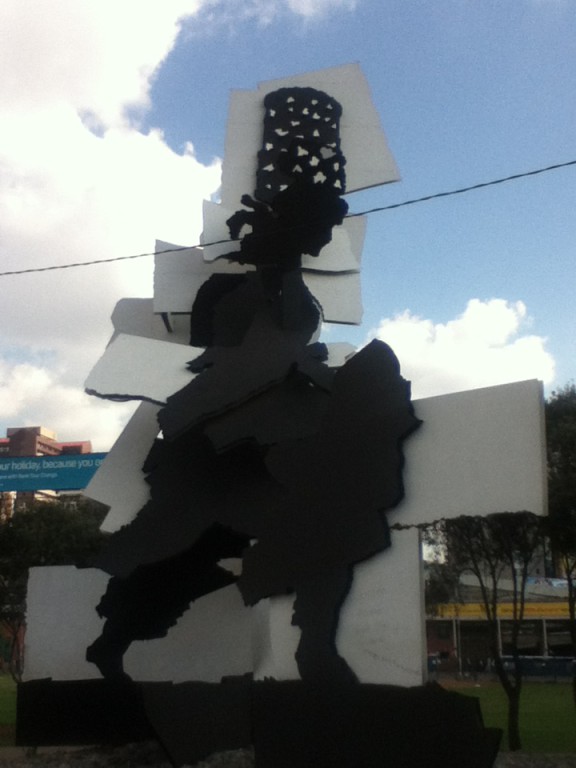 “Resting in a bed of rocks, the Fire Walker will give Joburgers much to enjoy,” reads the caption of an image with three people photographed in front of the William Kentridge and Gerhard Marx installation. It’s what one sees when approaching Bree taxi rank from the north, just after crossing the Queen Elizabeth Bridge. The caption is from an article written on the day of the unveiling in 2009.

Elsewhere, Gerhard and Kentridge pose with Johannesburg Development Agency CEO Lael Bethlehem. The sculpture was inspired by Kentridge’s drawing of a street vendor carrying a brazier over her head. The Joburgers referred to in the article are mainly pedestrians on their way to catch taxis, or motorists driving past.

A group of students who are rapping and beatboxing near the piece are about to disperse. A quick back and forth with a few of them reveals the same level of apathy encountered at other sites.

Moments later, a man wearing a white shirt, blue jeans and a pair of green sneakers approaches. His name is Andrew John, he says. He comes from Lusaka, Zambia, and has family in Malawi. John has vested interest in the installation, even providing his own interpretation of it. He points out the brazier, the legs, and the rocks beneath, which symbolise the burning fire on top of which the Fire Walker is treading.

The conversation shifts from aesthetic value to John’s feelings about the artists. As if on cue, he launches into a speech so divine it could be poetry.

“This thing [was] done by white people in a black man land, you understand?” he asks rhetorically.

And how does he feel about that?

“I don’t feel nice. I feel guilt in my heart, because someone is getting paid [to do] these things. I wish it was a black man, you understand. As time goes, maybe the black man must have the mind to do those things,” he says.

John responds to the suggestion that black artists as equally capable: “But where do you get them? Why are they not known? Why are we not able to know them so that maybe whenever there’s something going on, they give us an [interpretation]? ”

Nolan Dennis struggles to think of any black artists getting commissions at the level of the Kentridges and Marxes of the art world.

“All the major works in our cities are produced by white artists. The most interesting public art at the moment takes the form of temporary installation and performance-type work, and this where you find a lot of black artists. Perhaps this talks to the severe contradictions of working in public spaces in South Africa.” 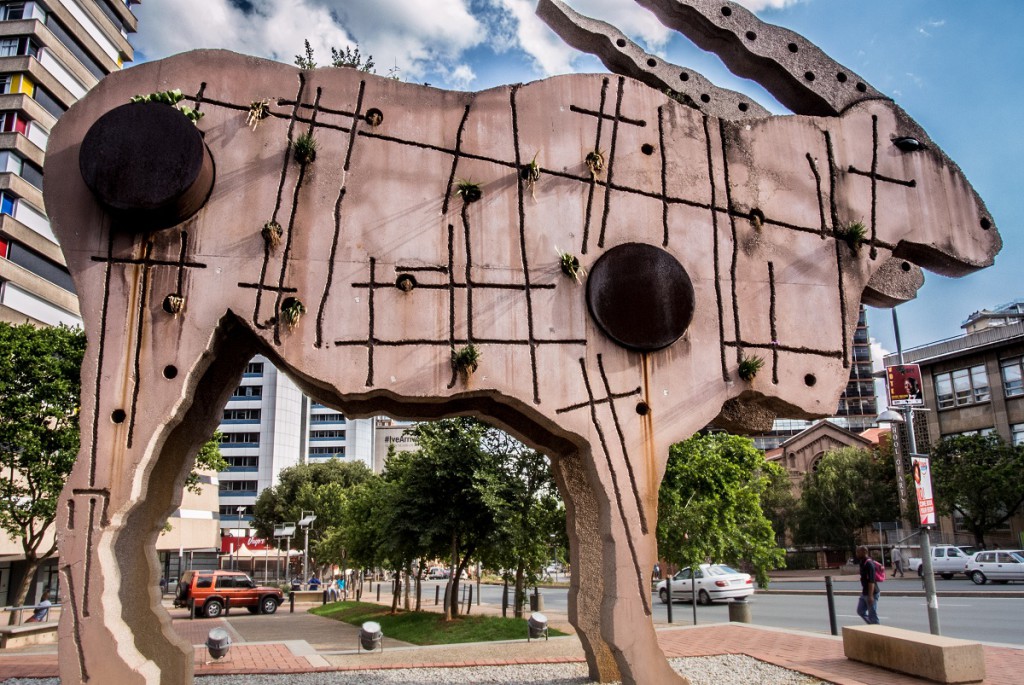 Two blocks away from the coffee shop where Bertha Street approaches the Nelson Mandela Bridge from the north, passers-by, mainly students coming from or going to a lecture at Wits University across the road, give their impressions of the “bull” that faces the institution’s entrance.

Unveiled in 2007, “the bull,” it turns out, is actually an eland. It has been erected on the same ground where the bull and books fountain once stood outside vinyl junkie John Ackerman’s Street Records, revered for being the Mecca for affordable nu-wave and punk-rock LPs in the Seventies.

Artist Clive van den Bergh says that the installation explores “the relationship we have to land, our need to find ways to share it, to understand and use it’s [sic] resources and capacities, as well as it’s [sic] historical, economic and cultural meaning”.

“It’s a statue of some kind of bull, I mean…” says a lady passing by, on her way from a lecture, clearly in a hurry and not in the mood to answer questions.

How does she feel about it?

“I couldn’t care less, in all honesty. If it’s here, it’s here, if it’s not…” she responds, echoing the madala’s sentiments about the graf art in Newtown. If the cobbler and student were to trade places, if he were here and she there, would they have responded differently?

A man seated next to the eland’s hind quarter says he’s been waiting for his friend for five minutes. In all that time, he hasn’t noticed the eland or, more accurately, taken it in. He adds that installations like this serve another purpose: directions, especially for people unfamiliar with the area.

A few moments later, a photographer who’s been locating her subject within the eland’s frame finds time for a quick chat. What’s the fascination with the structure?

“I normally shoot around this area … well, around that [eland]. It’s just one of that elements that, if you see it, you know that you’re in Braam,” she says before rushing off to take another shot.