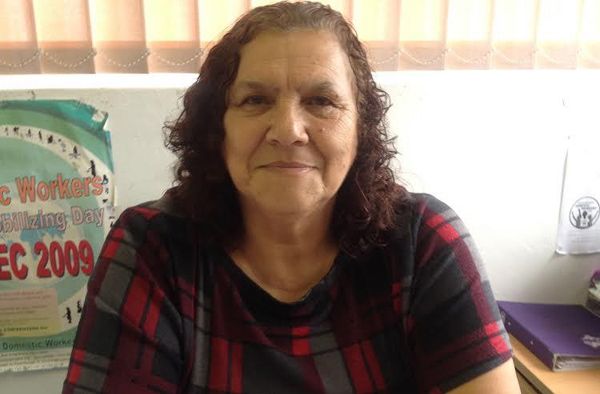 Nearly 17 years ago, sitting behind a slightly battered desk in Cape Town’s Salt River, Myrtle Witbooi told me that the dream of domestic workers being “treated like other workers” would not die. “We want a living wage and proper hours. It is a dream…but we will get there,” said the woman who, in Cape Town in 1965, convened the first organisational meeting of domestic workers.

She was angry then and remains so now. Almost half a century later, she points out that a multitude of promises have been broken; that although the Labour Relations and Basic Conditions of Employment Acts are in place, domestic workers remain disadvantaged.

“We are not happy, so watch out for next year, things will be happening,” Witbooi said this week. Prime cause of the general unhappiness is the fact that the “same old formula” for determining domestic worker wages continues to be applied, despite petitions by thousands of Sadsawu members and supporters.

In the first place, there is a wage differential between what are regarded as metropolitan and small town or rural areas. There is also no allowance made for differences between live-in domestics and the probable majority who have to travel daily to work.

The increase announced by the minister, although higher than the rate in previous years, is still below the cost of living increase for the lower paid. Yet there was the usual cacophony of fallacious complaints from employers who threatened that jobs would be lost as domestic workers were “priced out of the market”.

This year, activists had hoped for more. “The minister said she wanted the views of workers and, as she travelled around the country, we organised for workers to fill in forms to say what they wanted,” said Witbooi. “She paid no attention. It seems these people only listen to business,” she added.

Increasingly too, workers are being employed on a part-time basis of less than 27 hours a month. Here the rate is R12.40 an hour, but many of these workers bear considerable travel costs between jobs.

“We take the work where we can get it,” said Jabulile, a solo mother with two teenage children who works for three employers living at considerable distances from one another and from her township home. Like other workers in her position, the only expense over which she has control, is food.

Rent, water, electricity and transport are all predetermined and have to be met. Much the same applies to school fees, uniforms and books. Transport alone accounts for R700 a month.

So it is not surprising that recent studies by the Studies in Poverty and Inequality Institute reveal that 25% of the population, one in four South Africans, regularly goes hungry. Many of the hungry will be domestic workers and their children who, as the study reveals, starve “as a consequence of poverty and not because our country is not producing enough food”.

Jabulile is more fortunate than many of her peers. There are no luxuries, but she and her children have not yet been reduced to bread and sugar water. However, it is a hand to mouth existence and, as for most domestic workers, a very far cry from “a living wage and proper hours”.

“But it is a dream we still intend to realise,” said Witbooi.