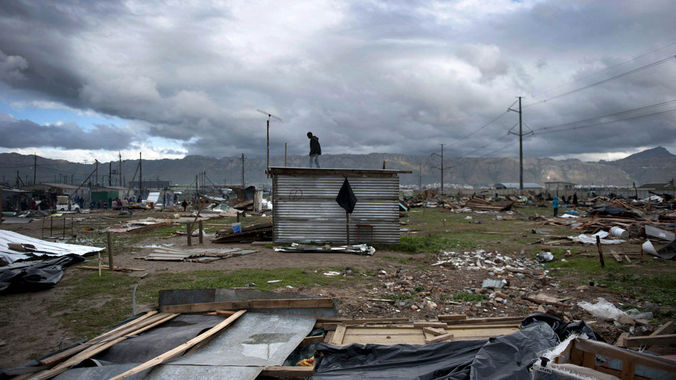 Last year, the eviction of hundreds of shack dwellers from Lwandle, Strand on the eve of a winter storm sparked a national outcry. Seven months later, construction of alternative accommodation has ceased, and yet dozens of evictees remain homeless – holed up in a temporary relief shelter at a nearby community hall. They have been all but forgotten writes Daneel Knoetze

Former Lwandle resident Mandla Thethani, 44, points out where he lives: a mattress on the stage at Nomzamo community hall crudely balanced on parallel rows of plastic chairs. Underneath this bed frame is the odd change of clothing. Nothing else. This mattress, blanket and clothing is all that Thethani owns.

His shack was one of those demolished in the first round of evictions at Lwandle in February 2014. He lost his home, furniture and appliances and was forced to take shelter with his extended family in a nearby township.

“My wife was pregnant at the time, and now she has a baby,” he says. “I have two other young children.”

Thethani’s family had to move back to Barkly East in the Eastern Cape.

“It is not good for a man to be away from his wife when the children are young. Especially when there is a newborn baby. I miss them very much, but this hall is no place for them. It is an unhealthy and stressful place.”

Twenty-eight-year old Pheliswa Cekiso’s eviction from Lwandle also resulted, albeit indirectly, in her being separated from her newborn baby. Three months pregnant at the time of the June evictions, she was one of the first people to take up residency when the hall was opened to evictees on June 5. Here, sleeping on a mattress on the floor and with little privacy, she braved the last months of her pregnancy. She gave birth to a healthy boy at Tygerberg Hospital on November 26 2014. But, feeling that she could not care for the child without a home or the support she enjoyed from her neighbours when living in Lwandle, she agreed to give her son up to social services. She still lives in the hall today.

“I am very sad,” she says. “I loved my baby. When he was born, he was beautiful. But, I will never see him again. I accept that this is for the best. I only wish that I could have been home to raise him in a safe place.”

Although many of their former neighbours have moved back to Lwandle, there is currently no plan for people like Thethani and Cekiso to be similarly relocated. They form part of a group who have been rendered permanently homeless by successive evictions at Lwandle.

Figures vary, but the City of Cape Town estimates that more than 100 people currently live in Nomzamo Hall. No one has calculated how many of them are new arrivals from elsewhere and how many are Lwandle evictees.

Around 484 households have been rehoused in government funded shacks that have been built in two phases at the site of the evictions. Yet, Thethani and community leaders like the local ward councillor estimate that at least 230 people, who were on an original list to benefit from the new shacks, have not been rehoused. The construction process has now stopped. GroundUp could not establish whether there are plans for a third phase to accommodate the shortfall.

Even though it was done without a court order, Thethani’s eviction from land owned by the SA National Roads Agency Ltd (Sanral) in Strand garnered little attention. It was the violence and scale of the second, final round of shack demolitions at Lwandle on June 2 and 3 2014 which resulted in condemnation from all corners of government, civil society and the South African public. The hardships of the evictees were compounded by a winter storm which struck the Cape immediately after the eviction. Many families were left in the rain and cold without shelter.

In response, the City of Cape Town offered to provide evictees with alternative accommodation at the nearby Nomzamo Hall. With funding from provincial government, procurement of materials through the City, and under the management of the Housing Development Agency (HDA), a project to build new shacks, to accommodate the evictees, was started a few weeks later.

Meanwhile, commentators explained that the Sanral instigated evictions, carried out without a court order, were unlawful and unconstitutional. Two days after the evictions, Human Settlements Minister Lindiwe Sisulu established a commission of inquiry to investigate.

News of the sudden attention given to these evictions prompted residents like Thethani, who was still without a place of his own after the February evictions, to move to Nomzamo Hall. He had understood that the list of affected people who stood to benefit from the new shacks would include the evictees from February.

“There was this agreement, yes,” says Bishop Sibonile Gcilitshane, a community leader whose office nearby has positioned him to assist the people taking shelter in the hall.

Gcilitshane confirmed that originally the residents had agreed that everyone would move back to Lwandle on completion of the shacks as one community – “in one go”.

But, some evictees, including members of an elected residents’ committee, became frustrated with the long wait. As shacks were erected, these residents, in groups of 20 or 30 at a time, moved in.

“We feel very disappointed by the committee for having allowed this to happen,” says Thethani. “In fact, they themselves did the same. They were supposed to stand with all of us. We were supposed to be a community. But everyone stopped caring about us when they got their new homes. Now we have been left here alone, and we do not know what the future holds.”

GroundUp tracked down the chairman of this residents’ committee to his new shack in Lwandle. Initially he gave his name and answered some basic questions: How many shacks have been built? Who benefitted? How was the committee elected?

Yet, when questioning turned to Gcilitshane and Thethani’s allegations that he had acted in self-interest and abandoned his neighbours at the hall, the interview came to an abrupt halt. He insisted on personally scratching out his name and comments.

The City acknowledged that at least 100 people are currently occupying Nomzamo Hall. Mayco member for Human Settlements Siyabulela Mamkeli notes however that “it is not clear” whether all these people are in fact evictees from Lwandle.

The hall has indeed become a place of safety for other homeless people. Lying on one of the plastic chair beds is 25-year-old Siyabonga Qushwana. Last year, before he fell ill, he lived with his family at the nearby Asanda Village informal settlement. Every morning, he commuted to Parow where he worked as a trolley porter at a Checkers outlet. After he lost his job, he was kicked out by his family.

Some of the hall’s residents found him lying on the ground, begging outside a supermarket nearby. They took pity on him, gave him a bed alongside their own and, through the charity of one of the hall’s residents, he now has something to eat every day. But he has lost close to half his body weight. He lies in Nomzamo Hall day in and day out. Qushwana says he is on medication for TB. His new neighbours help him to travel to the local clinic where he receives his medication weekly.

“I also hope that I will become better and have a place of my own to stay one day,” he says. A pearl of dark red blood flows from his nose and settles on his upper lip as he speaks. He does not seem to notice.

The destitution of the residents in the hall, both Lwandle evictees and others like Qushwana, has been a concern for ward councillor Mbuyiselo Matha for the past seven months. His Christmas day was spent making arrangements for the dead body of a 74-year-old TB patient to be removed from the hall.

This is how Christmas day started for the residents of Nomzamo Hall: a body surrounded by blood which had been spewed from the dying man’s lungs during the course of the night. He died at 4:30am and was only taken away by a mortuary van four hours later.

Matha’s offices are adjacent to the hall. Daily, residents call to ask what is happening, what the future holds, and whether they will ever be relocated.

Since early November, when the SA Social Security Agency (SASSA) stopped providing nappies, food, baby milk and other essentials, their concerns have become more desperate and immediate. Residents want to know how they can get food to feed themselves and their children.

“What am I supposed to tell them? I do not know the answer to all these questions. I have been left in the dark, as they have,” says Matha.

This is not through a lack of trying to get clarity, he says. Originally, the HDA (the agency managing the rebuilding of shacks in Lwandle) told him to wait for the commission of inquiry into the evictions to be completed before raising further questions. The commission’s work has been completed. It’s report and recommendations were handed to Minister Sisulu on 8 October last year; weeks later, it was tabled in parliament.

Matha brandishes his phone, showing messages sent to the HDA’s regional manager Bosco Khoza in October. One asks about “the future of the rest of the evictees in Nomzamo Hall”. The messages were never responded to.

Asked the same question by GroundUp, Khoza said that he had just returned from holiday, that he did not know about the people in the hall, and he would have to investigate before responding. He asked that an email query be sent.

Neither has the ministerial commission’s report, the document which the homeless evictees and Matha were told to await, provided any clarity for those who lost homes and possessions during the eviction, even less so for those who have not been relocated to HDA shacks at Lwandle. The list of recommendations deals exclusively in broad, nationally applicable terms – suggesting policy, legislative and executive amendments aimed at ensuring that an unlawful eviction of the Lwandle variety does not reoccur. There is no mention of compensation or rehousing for the evictees.

The City is providing cleaning and maintenance services for the people living in the hall. But, Mamkeli stresses, shelter at the hall remains a “temporary arrangement”.

In the meantime, Thethani will continue to work as a postman in the hope of saving enough to be reunited with his family in a place of their own one day. Cekiso, unemployed, will continue to linger on the fringes of the hall by day, waiting on councillor Matha to deliver the news – good or bad. And, Qushwana will lie in the shadows of the unlit hall, taking his medication and trying to regain enough strength to return to his job as a trolley porter at Checkers.

This piece first appeared in Ground Up: http://www.groundup.org.za/

Main Photograph: Shacks are demolished during the evictions at Lwandle last year. There has been little succour for those left homeless as the constitutional right to alternative accommodation has been mired in alleged corruption and inefficiency. – by David Harrison