In Maseru, a “4+1” refers to a five-seat vehicle used to transport people around town. Drivers also offer long-distance trips, often used by Basotho who have business in Ladybrand or Bloemfontein. One afternoon, Tseliso Monaheng caught a 4+1 from the other side of town to the taxi rank. The single passenger and driver embarked on a journey; one of bellows and body, recollecting the discography of the late Basotho accordionist, Famole (real name Teboho Lesia). Curious, Monaheng sought the company of Famole’s close friend and fellow musician, with whom he continues to collaborate, albeit in a more surreal exchange.

After a brief exchange of “hola” and “sharp hoezit”, the driver and I got talking about the music playing from his stereo cassette front-loader. It was Sesotho artist and musician, Famole.

Famole was born in Ha Sekhaupane, Matelile — a village in the district of Mafeteng. Matelile itself is a curious place. Having birthed countless stars, it is accordion music’s source of life. The land can be harsh and unforgiving during times of drought. It is barren with dongas cutting through the ground due to overgrazing. But something uncharted and unexplored percolates in its water, and spirits claim the air.

His mother was a staunch member of the local Anglican Church. It is from her that he acquired his singing talent and religious inclination. The former ensured his unique vocalisation, the latter gave his music the gravitas that appealed to the mostly Christian Basotho nation.

He grew up a herd boy tending his father’s livestock in the wild. Here he sharpened his spiritual senses and learnt how nature operated. He had ample time— no less than four consecutive days a week, from sunrise to sunset— to perfect the singing he’d learnt from his mother, and to go head-to-head exchanging Lithoko with other herd boys— a war of words not dissimilar from a hip hop battle. His brash, militant and fast-paced delivery reflects it.

What made and still makes Famole great, was his uncontested command of the Sesotho language. He was not only adept at brevity and accuracy, but also able to test the limits of storytelling, often delving into deep mysticism through double-entendres delivered in the most melodious of voices.

Famole— the music, lyricist and the person, always had an informed outlook on issues of the day. His many albums remain testament to the events he witnessed in Lesotho from the late 90s into the mid-2000s, when he was most active.

Even today, through the hiss of mp3’s converted from cassette tapes, the issues his music addressed back then – national unity; peace among political parties; and the state of the economy, remain pertinent in the present.  His songs continue to inspire heartfelt sing-alongs in taverns, at weddings and family gatherings. 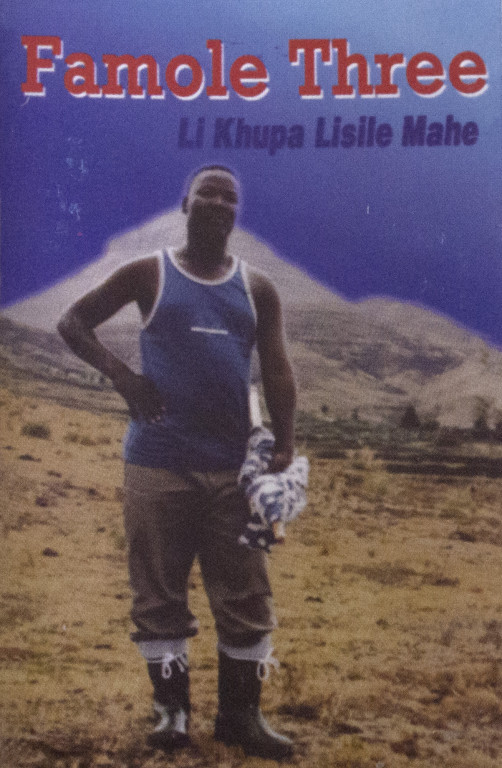 We spoke about our favourite albums and came to the conclusion that Famole Three: Likhupa li siile mahe, was his best work. It was also his last.

The driver then told about his friend who’d decided to go boozing one Friday evening after work. Upon arrival at his first stop, the friend heard Famole’s Lebitla le nkemetse. Later in the evening and after more drinks, he became increasingly paranoid because the jukebox was playing the same song on repeat. He eventually left to go to another bar, afraid that criminals were out to get him and were using the song— a prophetic composition in which Famole speaks of his own demise— to forewarn and threaten him.

Lebitla, from Famole’s last swansong Likhupa li siile, is a Sefela (hymn) in which the back-up vocalists accompany the lead voice and accordion music, usually in bass-heavy tones. “I know that my grave is waiting for me,” bellows Famole in a sorrowful voice. “…everyone has a number they’re assigned on earth but I don’t know the number, nor does anyone.” In Sesotho it is termed koli-ea-malla— a sad, mournful song.

The same song was playing at the other bar and again at the next, so the bar-hopping friend decided to call the 4+1 driver, informing him of this song which had stalked him from bar to bar. The driver explained to his friend that every bar in town was playing Lebitla because it was Famole’s latest release. Radio stations also blasted it on repeat, to the point that Lesotho experienced a Famole overload.

I haven’t met the 4+1 driver since, but it was comforting to know that somewhere on Maseru’s congested roads, someone still goes wild whenever a Famole song comes on the radio.

After months of negotiations, I finally got to meet Mants’a Mohale— an accordionist who emerged in the early nineties and grew to become the music’s guiding light. When I first contacted Mohale, he told me that he couldn’t speak over the phone because, “for all I know, you might have been sent to kill me.”

He had a point. There had been a spike in killings over the past five years which saw the loss of greats, like Selomo and Rants’o. Even during Famole’s time, the accordion music scape had been plagued by inter-factional killings, owing to the music’s roots in criminal gangs such as Ma-Russia— which started out in the mines during the first half of the 20th century. These developed into a criminal network with links traversing the Lesotho-South African border.

After meeting Famole, Mohale helped him hone in on his craft. The two eventually formed a pact which would last until Famole’s death in 2004. Despite numerous stories and conspiracies, it is believed he died of natural causes. His death inflicted a deep sense of loss among accordionists and musicians, also leaving a gaping wound in the hearts of Basotho who’d grown fond of his music and storytelling.

“I had converted a part of my home into a learning institution. It’s here that I taught Famole, Kholumo, Moja-lihlooho and others,” explains Mohale. During our conversation, he named all the fellow musicians with whom he worked closely and who have since passed: Seputsoe, Lechesa, Selomo, and many more. But it is his friend Famole, whom he still mourns.

Famole possessed the same level of affection for his mentor. In Lebitla le nkemetse, he says that Mohale should be one of the speakers at his funeral.

“Death is one of those aspects that artists sing about in their accordion music. Death is part of life in that each and everybody is destined to die when his time comes. Among Basotho, death of a relative is one of those painful experiences, the most touching day is on the funeral day,” writes historian Dr. Lehlohonolo Phafoli in his illuminating paper, which analyses the themes of accordion music.

Mohale tells me that his friend still appears in his dreams, sometimes helping him with song ideas and sketches for a verse. He points to one song in particular – Lethoasane from his album called Mololi. Mohale reveals that the first four bars were given to him by Famole in a dream.

Famole lives on through his music and the lyrics of others who remain with us. As in the past, he continues to represent the very best, not of only that genre, but of what Basotho can offer the music world.