It is those of us with the most potential to propel civilisation forward who most often choose to abstain from engaging in civilisation altogether. To be fair, this abstinence from reality is usually not so much a choice as it is a paralysis, the paralysis caused by the anxiety of knowing how great one is ‘meant’ to be: The prodigal child complex.

I am a young black man from the prodigal generation of South Africa – the eighties generation.

We are the generation parented by freedom fighters and battered hostages of a sadistically oppressive Apartheid regime. Our unique reference of experience has exposed to us innate secrets about the mechanisms of human society, one being that quiet times are earned by noise.

To the jaded generations before us, the noise is not a distant enough memory to ever fully adjust to current decibel levels.

To the naive generations after us, the noise is nothing more than a hyperbolic ghost story, told by the jaded generations.

We had a pungent enough whiff of segregation during our formative years, although we grew up in the foreign comfort of newly gentrified suburbia. We are the first black generation of English first language speakers. We are cultured, well-educated and well-travelled. We date and befriend interracially without a second thought. We get as wasted as our rich white friends and broke black uncles. We face structural and personal racism in our daily lives on multiple levels but have been equipped with the intellectual self-esteem to challenge it academically.

Our parents created a monster. They could not have anticipated how opinionated and foolhardy we would be. Nor could they have predicted how insatiable our philosophical ambitions would be, how bored the quiet times would render our irritable souls.

The liberation heroes who brought democracy made a covenant with the disenfranchised black community in exchange for their political loyalty. They promised to restore the dignity in black lives that was savagely stolen by colonialism and post-colonial oppression. Our generation is the living product of that promise’s partial fulfillment. We have inherited the debt of their manifesto.

The sociological spotlight is on us, and the intra-generational stage fright has kicked in. But why is this? Why are we so effortlessly brave and capable in theoretical discussions about governance and policy and yet, when it comes to the actual crunch, all of our ad lib brilliance suddenly dissolves into fear and impotence? The answer is quite simple: We do not believe in ourselves, partially because nobody else does.

No one believes that a generation of black spoiled brats is the best hope for our nation and continent’s socio-economic salvation. And their scepticism is hardly unfounded.

Our very privilege is our greatest handicap. We are decadent, reckless and apathetic. We are ideologically fickle: Our beliefs erratically oscillate between brands of absolutism, idealism and fatalism — depending on the occasion. However, we tend to be extremely decisive on matters of which we are not even privy to the most pertinent details. 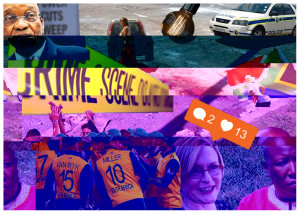 We hold all the catchy platitudes and Oprah quoted formulae to happiness in our colour-coded key-holders, and yet we are still so tragically and hopelessly sad. You can see that abject intangible sadness on our drugged and drunken faces in the musky hours of the morning in the clubs, pubs and taverns that we nocturnally exile ourselves to in order to avenge the stoicism of our ancestors. Those little predictable realms we choose to hide, from antisocial networks to the seasonal sub-cultures and disposable causes we evanescently subscribe to. We bury our heads in trivia and frivolous hyper-activity, all to avoid the overwhelming gravity of the moment.

Although our behaviour might allude to symptoms of ignorance, we are well aware of the fact that the black liberation struggle is far from over and that the onus is upon us to bring forth a new African revolution. This revolution will be no less violent and laborious than the ones our foremothers and forefathers galvanized. This will be a revolution of spirit and mind, and its soldiers will be the artists, designers, entrepreneurs, curators, scholars and commentators with a synchronised objective to expand and enrich the African understanding.

We have been inhaling the language of our culture like second-hand smoke, distorted and impure, causing us more harm than good.

Traditional healers print flyers and have office hours now. Initiation ceremonies require down payments. Dowry is paid with credit cards instead of cattle. Our traditions have become little more than additional incentives to consume, and our culture has been reduced to a patriarchal dogma, a mythological manacle on our identity.

This is where we come in: To counteract the vast over-simplification of the African identity by didactically placing a magnifying glass over the evolutionary nuances of the African condition, to add colour and context to the African story, to reinvent the word itself, let alone its meaning.

Africa, also known as God The Creator of all life on earth. And just like most gods, it has been betrayed by its own creation. We are God’s bastard children, conceived in the chaos of The Armed Struggle and raised on a cloud of democratic optimism. Yes, we are spoiled brats, and it is precisely our chronic dissatisfaction with routine and mediocrity that makes us the perfect candidates to lead Africa towards a new epoch, the epoch of quiet wars, wars fought with daring ideas instead of bullets.

There is no question that we have the ammunition aka. ideas. The real question is whether we will ever muster up the courage to execute them or whether we shall forever remain crippled by our infinite potential, procrastinating our adulthoods until they have passed us by. Then we would have wasted our ancestors’ blood as well as all this precious time that blood has bought us.

Needless to say, that would be a great shame, one that would ring in the ears of our descendants for ages to come.

Artist’s Statement: Inspired by the current newsworthiness of the South African social landscape, Is This Freedom mashes up the fluidity of contemporary online culture against a backdrop of South Africa politics, sports, lifestyle and pop culture.

The glitch infused artwork questions the solidity of democracy as an easily disposable notion on South African freedom and the seemingly lacklustre stance on a truly independent democratic state.

The inclusion of popular social media networks attempts to mimic the constant flux of the socio-political and economic sphere of South Africa through likes, favorites, comment threads of consciousness and inevitable naysayers – trolling.