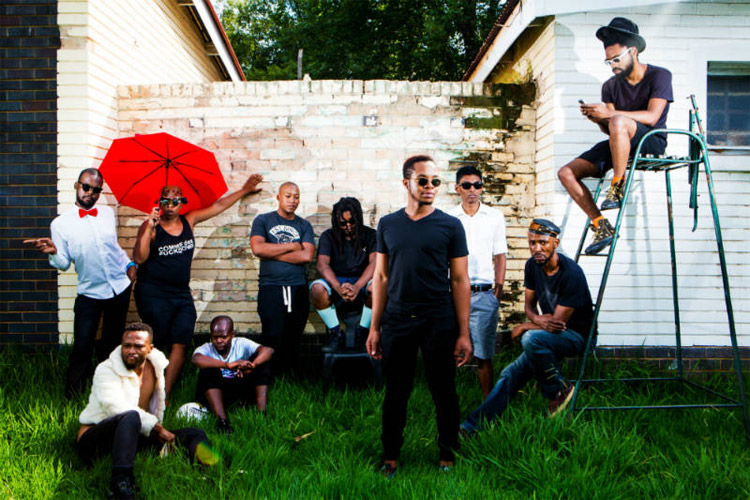 Phrases like “Africa’s new band” or “the first black South African rock band” will always be affixed to the BLK JKS. It could be amnesia, or just plain ignorance of encountering something for the first time, that leads to people assuming it must be new. It’s no exaggeration to say that when the band exploded on to the scene, they were a global music event. And even though they have shed some key personnel, they have been around for what seems like a long time.

To say The Brother Moves On followed in the footprints of the BLK JKS would be plain stupid. And ignorant. But when the group gained mainstream appeal, they didn’t get the astonished stares and bewildered but approving head shakes that followed the BLK JKS wherever they played. Their music is a mash-up of rock, jazz and funk; their gigs are trance-like, heady sessions with the textures of religious gatherings. As the name The Brother Moves On suggests, the door was always turning – members coming in, members going out.

A key problem with collaborations is that some important ones never happen. Sometimes the weather is inclement; other times borders conspire to separate kindred spirits; in other instances, people are born during different seasons, spaced out, like time itself. This is echoed in a passage in the novel Amulet by Chilean writer Roberto Bolano, in which a character moans, “The truth is our history, full of encounters that never occurred”. So it happened that Brenda Fassie never jammed with the BLK JKS. Nor did drummer Jethro Shasha gig with The Brother.

Ahead of their collaboration tonight at the BLK Brother gig at Monchichi in Marshalltown, Joburg, Mpumi Mcata and Siya Mthembu sat down to talk. They sent The Con a transcript of their conversation:

Siya Mthembu (SM): On New Year’s you took off the hat [which has been a trademark], people were blown away. How many hats do you have? Can we expect the hat to come off?

Mpumi Mcata (MP): New Years, c’est la vie. I am a man of many hats…slowly I will peel them away to reveal more hats, I can’t help it…and i feel the BLK JKS are the same…Slowly, but surely, expectations we will confound…Inshallah. Wait, why was this a thing?

MP: You returned from your trip in the overseas with a shaved head, and was also spotted at the same drug-fuelled New Years party….What the fuck, why did you cut the hair ? It’s really distracting for some out there who are just trying to focus on your music.

SM: My brother and best friend [Nkush] past away and tradition dictates that I should have to cut my hair for this. It took me a year after he passed to understand what cutting my hair, symbolically, meant and what its done for me psychologically. I’ve always fought tradition until I could find the utility in the ritual. I don’t want my children asking me why we do something and my answer being because that’s how its always been done. If the cultural practice has no utility its redundant to me. Also what do my dreads have to do with the music?

SM: You’ve been singing lately, when and how did this all begin and have you ever written Blk Jks lyrics we may know?

MP: I’ve written quite a few BLK JKS lyrics you may know, yes…Our writing process is a fairly democratic one. Why does the caged bird sing ? It is out of necessity, that I sing more now. Also our revolving door of members keeps revolving, just as it has since day one, so it’s an interesting exercise to get into…While one is waiting to see who else falls in, out…or comes crashing through those doors.

MP: You lost your brother, colleague and founder of the band, Nkush, not so long ago. This was a huge shock and crushing surprise to me, one that reverberated across the spheres, think I was in the United States at the time, trying to imagine the situation on the ground….Very sad….Uhmn…Since he was such an integral part of the band’s energy, did you ever consider, even for a moment, dropping the band?

SM: I consider dropping the band everyday and caging “the bird” in a “Plain Jane”, nine-to-five existence. Life in the Brother without Nkush has been difficult, to say the least, he did so much to pull us all together and was never properly credited for such. We have been forced to search for his magic in each other as its his magic that convinced us we should do this together. On our last tour before he left this existence Nkush has advised me to leave the Brother and get a life – that haunts me everyday. Later in the year we are doing a retrospective exhibition of Nkush’s work entitled “Say Something Stupid”. At the time of his passing he was quitting The Brother and focussing on his solo rap career. He got into studio and only got to record one track with the same title, Say Something Stupid. We are hoping to continue the healing by digging deeper into the magic of Nkush Mazel. 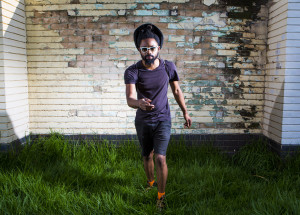 MP: No comment. In truth it’s more like, anything I don’t like I don’t give that much thought to, so it’d almost be a compliment to mention any of it…Weird, I know…But maybe this would work better if you shot names at me and I replied “yes, no, or maybe”, to those ? What am I into ? Well, three is tough but let’s see, Hlasko, Okmalumkoolkat and Motel Mari (you should hear the new shit those cats got cooking). [Editor’s note: Nice plug for your other project, Mpumi ;-)]

MP: Repeat the question please… Actually, yeah, can you answer the same question?

SM: Was really into this band called Motel Mari until they got really tired of the Jozi scene and stopped giving their all, but I hear they got new work on the way. I’ve been in love with Joao’s [Orrechia, from Motel Mari] work since he was with Five Men Three Missing. Project Elo is in the hot seat at the moment and are my band of the year in 2014. And when I’m in for something out of the ordinary I link with my man Sibusile’s work under the title of the Unlearning. And Malcolm Jiyane is a genius with a big heart. Ditto on bands I hate. Ok, couldn’t help it but Shortstraw remind me of Spar adverts in Kempton Park.

SM: Where will you never play again and why?

MP: We are always down to return to places, switch up the terms and conditions then fuck them up again, hard, so….We’ll always be into returning….Revenge is a dish best served piping hot…Except for maybe the places that dare to shaft us on payment.

SM: The Bassline, it always feels like we at a funeral or a memorial service for a South African musician we didn’t give enough time or energy to as a nation.

SM: The Blk Jks are normally credited with being the first Black rock band, how do you feel about this when you consider all the music that has come before you which in itself was never given the recognition by the global North.

MP: Yeah, it’s cool. Obviously not true, though, and the truth always rises to the surface, to face the very one trying to serve it to us like a stubborn turd in a back alley latrine. Of course, that said, we deserve our credit too. I mean, we dared to think the way we do when so many advised against it, when so many said it’d get us nowhere and certainly not signed, or on the covers of magazines touring that ‘global North’, but we did it… In a lot of ways, we were, actually, the first…just as those who had gone before us were the first too, no matter where they may have drawn their vibes from. We got compared to so many bands that sounded nothing alike. That’s when we knew we were onto our own shit. You’d have to go quite far back from the time we came out to find the last time the term Afro-futurist was used in earnest again, referring to something new, in international musical circles. Coming from Africa ! It was so exciting, but hey, they will write us out of that part of the Wikipedia…It’s cool though, maybe it’s not that deep. Anyway, originality is overrated. We’ll find other ways to be, we always do. If you’re good, you’re good, if you’re shit, you’re shit and that’s about as much innovation as the game can take, that’s what people remember… It’s harsh, you just need to have the stamina to play it louder or harder for longer….Then, press it to vinyl. Time will tell, we carry our stories and histories with us. Shout out to National Wake and Malombo etc. I know they’ve touched our blood. 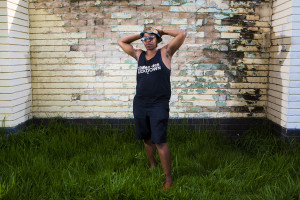 MP: How do you feel about some people calling you the ‘little BLK JKS’ or the ’new BLK JKS’ and so on… ?

SM: One word “shem”. Ours (TBMO + Blk Jks) is a bond that stretches beyond now. I’ve still got my poster of the gig we did in Grahamstown in 2003/4 entitled “Mabel’s Melville Rendezvous” when no one gave a damn about this live music thing (not sure if anyone does yet though). We are a continuance of roots laid deep, decades ago, and give credit where credit is due. We have deep respect for the space the Blk Jks, TATV, Thandiswa Mazwai, Kudzi, Kwani Experience, 340ml, Tucan Tucan, FutureHistory and Impande Core made for us but as you said when you stand out, they like to put you down for being out of the norm. Then they write you out of the Wikipedia page by likening you to those who stood out before you.

MP: Oh yeah, Siya, what’s our plan with this whole collaboration thing, anyway? How we doing it ? Feels chaotic… You flying to Tanzania and back, then Cape Town, up to this and that, me to Berlin, Tshepang [Ramoba, the Blk Jks drummer] too, then to Rio and somehow in between we are all rehearsing? Guess we’ve come a long way from just getting high on fumes in Melville, ha ha!

ST: Well the show opens with both bands’ rhythm sections and Ray [Moorvan, TBMO’s guitarist] sharing the stage. We then do a track composed this last week which sees both full bands on stage. From there the Blk Jks do a set with their featured artists. TBMO return to stage and Blk Jks take a chill. We start with a collaboration with Nosisi Ngakane, followed by poet Makhafula Vilakazi’s rap collar with the Blk Diamond Butterfly. We close our half with a Blk Jks medley where we feature Neo Hlasko. Then the finale where both bands feature Thandiswa Mazwai. At this point calling it a marriage is rather hectic, I’d rather say that it’s a blind date that your family has been trying to set you up with hoping you end up married.

The Blk Jks perform on February 28 at Monchichi, 23 Fox Street, Johannesburg. Doors open at 8pm, R100 will get you in.