“There are too many idiots in this world. And having said it, I have the burden of proving it.”

On the night of March 3, India’s state of Maharashtra, under the leadership of the rightwing Hindu Bharatiya Janata Party (BJP), banned the sale and consumption of beef.

The reasoning behind this decision is that the cow is a sacred animal to a particular form of contemporary Hinduism, and therefore it should be worshipped and not slaughtered for food. The first problem with this ban is that not everyone living in Maharashtra is Hindu – about 13% of the population is Muslim and about 2.3% is Christian, and these communities eat beef. Also, not all Hindus abstain from eating beef.

Furthermore, the Indian state is supposed to be a secular state, and this ruling clearly favours one religious group over others. But although the subordination of a once secular state to a form of religious fundamentalism is distressing, it is not surprising in light of the fact that the country is now controlled by a Hindu party so rightwing it is often termed fascist under the authority of Narendra Modi, who came to power via a synthesis of hypercapitalism and religious fundamentalism.

This ban will devastate the beef industry in Maharashtra, an industry that is largely run by the Muslim minority. It is not an isolated act. On the contrary, it is part of a longstanding attempt by the Hindu right, now backed with the power of the state, to make the lives of religious minorities increasingly difficult.

The ban provides the fascist project with two immediate benefits – exerting control over the minorities by sending a clear message about their increasingly precarious position in contemporary India; and dealing an economic blow to Muslims who trade in the bovine industry.

It is no wonder that Devendra Fadnavis, the loathsome young chief minister of Maharashtra, was crowing with malicious glee on Twitter as he thanked Modi for making his dream come true: “Our dream of a ban on cow slaughter becomes a reality now.”

In a state in which millions are impoverished, bitter religious and ethnic divisions are being encouraged from above, and basic issues like sanitation, housing, environmental degradation, violence against women, gross exploitation and mass unemployment are not being attended to, Fadnavis dreams of banning beef.

But of course, scapegoating, or perhaps in this case “scapecowing”, is the standard mechanism by which fascist regimes blame vulnerable minorities for social ills while allying themselves with the worst excesses of capitalist exploitation and plunder. It has always been the practice of those who rule without ability or principle to try to mobilise popular sentiment around unimportant issues, creating spectacles in which their little followers can imagine themselves as powerful actors, while repressing any attempt to develop an inclusive and emancipatory politics.

Many feared the worst when Modi became the prime minister last year. But – thus far – he has not led India into the sort of spectacle of violence that many feared.

What has happened is that there has been a move, decentralised but clear, towards a more repressive politics based on the marginalisation of religious and ethnic minorities, an affirmation of a deep social conservatism and an embrace of the most rapacious elements of capital.

Modi has made sure his image is kept clean, relatively, while his minions in the Rashtriya Swayamsevak Sangh – a militant fascist organisation of which Modi is a member – the various Hindu sabhas, state ministers, and other assortments of Hindu conservatives go around enforcing his vision of a Hindu India.

This move is classic Modi.

In 2002, when Modi was state minister of Gujarat, there was an anti-Muslim pogrom over three days that led to mass rape and the slaughter of about 2 000 Muslim children, women and men.

There is considerable evidence that Modi was instrumental in inciting the violence, and that during the pogrom, he ordered the police not to intervene. The evidence against Modi was so convincing that many governments, including the United States, banned him from entering their countries.

But by 2013, 11 years later, Modi was absolved of any wrongdoing. The case was compromised from the beginning with accusations of blackmail, threats, and concealment of evidence. Modi is able to mobilise the right rhetoric to the right audience with very little of the brutal underside of his fascist politics sticking to him. He now seems to have repaired his relationship with the US, and has convinced many that his main agenda is simply to make India a success. 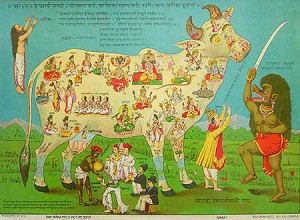 On the ground, though, there is a different story to tell. Communal tensions are rising. Organisations like Love Jihad, which opposes inter-religious marriages, are growing. This year, rightwing Hindu organisations such as the Shiv Sena and Hindu Sabha have taken to the streets to protest and punish anyone celebrating Valentine’s day, reminiscent of similar attacks in the early 1990s. Parliamentary members of the BJP under the control of Modi routinely engage in hate speech while Modi remains silent. Last December, Sadhvi Niranjan Jyoti, a BJP state minister, made statements at a rally, effectively calling for the capital to be run by Hindus: “It is you who must decide whether the government in Delhi will be run by the sons of Ram or by bastards,” said Jyoti.

India under Modi – like Turkey under Recep Tayyip Erdoğan, Russia under Vladimir Putin or Mexico under Enrique Peña Nieto – is a brutal place where capital feasts on the body of society while political elites do their best to cloak themselves in the most chauvinist forms of nationalism and direct popular energies against vulnerable minorities of various kinds – Muslims, homosexuals, Kurds, women – and repress any attempts to generate popular emancipatory politics.

As eating beef curry in Bombay becomes a dangerous and dissident act, the vital task of our generation becomes to reimagine and rebuild an emancipatory politics in the global South.

Super Moo: In a poster condemning the consumption of beef, the sacred cow Kamadhenu is depicted as containing various deities within her body.