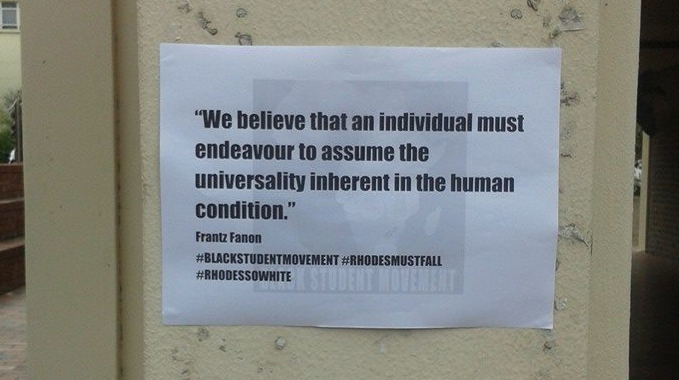 If you’re up early in Dakar and decide to take a walk along the shorefront before the day gets going you may see fishermen setting out on a raft cobbled together from the detritus of the city. If you look a little closer you may see, on the rocks, not far beneath the surface of the water, an old cannon. It’s just there, becoming, with the geological patience that operates at an unbridgeable remove from the urgency of the political, part of the sea.

For a South African this ease with the material remains of colonial power is striking. Here it seems likely that an object like a cannon once deployed in service of colonial rule would be treated as if it were imbued with a certain power – something to be put in a museum, given a platform and a plaque or locked away somewhere. The reason for this is that when the past still structures the present, or when its meaning remains acutely contested, its artefacts, and especially the symbolic presentation of its own power, come to carry real weight.

There are, clearly, cases where the moral imperative to remove the symbols of colonial power is undeniable. The memorialisation of Cecil John Rhodes – a sociopathic racist who wrecked destruction across Southern Africa on a world historical scale and laid many of the structural foundations for the forms of racial domination and exclusion that continue to structure the present – is one instance of this imperative.

It is true that the remnants of colonial power can sometimes be appropriated for new purposes. The ancient dream that seeks the wisdom, infused with a little magic, that can turn lead, dull and weighty, into gold – bright, malleable and precious – is not always empty fantasy. We only have to look at the great novels written back to empire, in its languages, to see this alchemy at work. But the alchemist chooses her materials – and how to conjure them into something new. And the moment of alchemical transformation is always a moment of grace. It can’t be demanded and it would be obscene to demand that it take the name of Rhodes.

The argument that suggests that changing society is the best way to reduce the charge that the symbols of colonial power still carry is not entirely without merit. The statue of Queen Victoria in downtown Durban doesn’t carry much of a charge because downtown Durban is a world apart from any sense that the conception of Empire organised around the cult of Victoria is a contemporary presence. But the fact that, in time, colonial symbols can lose their charge should not blind us to how political time passes. The passages through which we move from one mode of social organisation to another are seldom carved out in accordance with some sort of carefully worked out plan. The pace at which we move is not constant. Things happen, often unexpectedly, and frequently beyond the control of any would be political experts, that sometimes steadily corrode the structures of oppression and sometimes blast holes right through them. It is not unusual for a complex set of experiences to come, in a moment of political urgency in which political time speeds up, to cohere around a particular place, demand, gesture or idea.

These moments don’t come often but when they do they can take on a real significance. A commitment to changing society must include an openness to the unexpected moment in which new modes of politics appear, new social forces emerge and new possibilities are opened.

In our history, and in the history of many other societies, students have often been a force for political and intellectual renewal. In recent months, beginning at Wits where students issued a challenge to the curriculum and then in Cape Town and Grahamstown, where they have organised around a set of issues via opposition to the ways in which Rhodes has been memorialised, students have, once again, created a real opening in the sclerosis of the official consensus. If they can sustain that opening, and if they can sustain their constitution of themselves as an independent political force, one attuned to the demands of the here and now, new conversations and new practices will continue to become possible.

The rush to contain the emergence of a new force, and new voices, is being framed in the languages of gerontocracy, the logic of corporate power and the colonial logic that frames white authority as a rational, democratic and forward looking avatar of enlightened and universal reason and a black challenge to its attempts to naturalise its power as irrational, authoritarian, backward and parochial.

But there are many reasons why this moment should be welcomed. One is the urgent need to challenge the racism of both institutions. Here at Rhodes University it is evident that the institution has not been able to reform itself. Collegial governance has, on balance, reinforced rather than undone white domination and it has sheltered racist attitudes and practices. Many black staff and students find the university to be a hostile space in which a degree of mutilation of the self is part of the price that has to be paid to keep going.

There are also strategic considerations. Those who think that white domination can be sustained are delusional. The weight of history is such that change is inevitable. But until recently the only force that seemed able to drive that change – and given that the professoriate is unwilling to reform itself it will have to be forced – was the state. But this is the same state that is rapidly being subordinated to an increasingly predatory and authoritarian political class in the name of the people and their long strivings and struggles. Now there is a real possibility of the constitution of new power that can force change from within the university. This is a far more promising prospect.

Another significant aspect of the way in which the figure of Rhodes has come to stand in for the racism and coloniality of the contemporary university is that these campaigns have decisively transcended the tendency to reduce colonialism to apartheid, and the figure of the racist to a caricature of the Afrikaner. The confrontation with Rhodes tackles English colonialism, and English liberalism – which is both constitutively racist and the unofficial ideology of both the University of Cape Town and Rhodes University – head on.

In 1859 John Stuart Mill, the great philosopher of English liberalism, declared, in his famous essay On Liberty, that “Despotism is a legitimate mode of dealing with barbarians”. The essential logic of actually existing liberalism – freedom for some, despotism for others – was never merely, as they say, academic. In 1887 Rhodes, speaking in parliament in Cape Town echoed these sentiments when he declared that: “we must adopt a system of despotism in our relations with the barbarians of South Africa”. Yet in 2015, in a society still fundamentally shaped by the historical weight of this idea of freedom for some and despotism for others, a text book for first year politics students, written and prescribed in South African universities, a text book in which not a single African person is presented as a thinker worthy of study, declares that “Most discussions of freedom begin with John Stuart Mill’s On Liberty”. This sort of academic consensus, which seemed entrenched a month ago, no longer seems to have much of a future.

At Rhodes the discussions that the students have incited about their experiences of racism have brought a lot of repressed pain to the surface and some of the responses to these discussions have resulted in more pain. But full measure is being taken of the considerable distance between what the university claims to be, and what it is, and, also, between what liberalism claims to be, and what it is. There is an evident new resolve, bright and resilient, to affirm that the conversation about freedom needs to be taken up by young people, most of whom are black, on their own terms and in conversation with the long struggles and strivings of colonised people here and around the world. This is a moment to be welcomed.