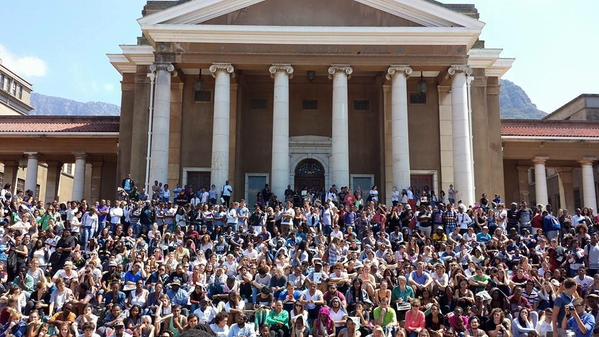 To resolve the situation at the University of Cape Town that was sparked by the statue of Cecil John Rhodes, I believe we must demand the reinstatement of former vice chancellor, Dr Max Price. On his installation in 2008, Price called for an Afropolitan university, encompassing the globe without short-changing the continent. Six years later, in 2014, the same man (or what appeared to be the same man) was reduced to the argument that a black woman had once been a professor at his institution.

Practising tokenism without the tokens, when you think about it, is as strange a strategy as running an Afropolitan university, in South Africa, with scarcely any black South Africans (who comprise 2.5% of the professoriate). I happen to be a fan of Robert Louis Stevenson, who wrote classics like Kidnapped, Treasure Island, and The Strange Case of Dr Jekyll and Mr Hyde. In Jekyll and Hyde, two personalities – one rational and benevolent, while the other is irrational and undecipherable – co-exist in the same individual. So I had an inkling of what might be going on when I went to see the vice chancellor a year ago.

Jekyll, like the predecessor whom he so closely resembles, has a gracious and fluent manner. The only way in which the two men can be distinguished, like male and female penguins, is through behaviour. Unlike Price, Jekyll generates a quantity of argument that produces in the listener the effect of a paradox or logical loop, like the Zen concept of one hand clapping. I asked the vice chancellor why I, or anyone, should put up with racial discrimination at UCT. He had a beautifully prepared answer: “Some people,” he conceded, “might admire you for refusing to accept it. But I believe that more people will admire you if you do accept it and simply triumph over it in the end.”

Racial discrimination is, like bank robbery, a crime. The mark of the Jekyll, given his genius for spreading confusion, is that instead of asking a question about avoiding a crime, we are considering the number of potential admirers the vice chancellor holds in his imagination. What if he counts them wrong? What if these admirers are purely imaginary and never materialise? Couldn’t I choose to swap some of these future admirers to be treated with simple equality?

The vice chancellor presented a number of additional arguments of stunning implausibility. He argued that imaginative writing, like a novel or a poem, could not be judged as an art but rather, like organic chemistry, by the number of citations to it in international academic journals. No writer or artist, musician or composer, dancer or poet has ever been judged like this at UCT, nor anywhere else I could find in the 1 000-year history of the academy. Precedent, however, has no force in the Jekyll philosophy. And as precedent disappears, so does the ability to see discrimination because every case can only be considered in isolation. Such bias is not as subtle in parts of UCT as is sometimes imagined. There is no commitment, in sections of the university, to equality at the level of procedure, from the right to be interviewed to the chance, given to some, of having your application evaluated in advance. I am not saying it happens in every case, or in every faculty. I am simply saying that it does happen and the institution has closed down every possible remedy.

In his defence, the vice chancellor is one of the mildest of Jekylls, without the love of backroom manoeuvering of the adult of the species. In 2009-2013, to take one example, in the humanities faculty, the secret denunciation reappeared, as if to confirm the old charge fondly remembered by the vice chancellor, about Moscow on the Hill. An administrator would promise a student anonymity and confidentiality in exchange for his or her writing a letter criticising a faculty member. You would be called in and told that there was a critical letter. When you asked to read the letter, you would be told that it was impossible because the writer had been guaranteed confidentiality. If you asked who the writer might be, you were politely but firmly reminded that, after all, the writer had been offered anonymity. Later you might find out that the letter was critical of your teaching style, or your sense of humour, or the lack of updates to a website – nothing that couldn’t have been said or done in the open. I have never heard of a university that practises this method of denouncing its own staff without some grave underlying charge. UCT doesn’t seem to learn. The racial dynamics of this type of intrigue devastated the university’s reputation in the Mafeje case, as it recurred in the 1990s, and in the Mamdani affair. However the victims of this institutional culture come in all the colours of the rainbow.

The signal of discrimination at UCT is clear when you look at what is typically required of different members of staff. In my faculty, the typical black professor holds a named chair and an A rating from the National Research Foundation. The typical white professor holds a C rating and no such chair. Significant discrepancies exist at the level of minimum citation counts, national and international publication, time to professorship, and even age (not that every or even most white staff benefit). In Jekyll discourse, however, these discrepancies vanish behind an ambiguous adverb. When the vice chancellor argues that more than 20 years “typically” separate a doctorate from a professorship, he means this in two ways. For black staff, he means “typically” as a general minimum, otherwise there would be as many below the 20-year mark as above it (and there are next to none who have risen to the rank of professor in a shorter period). For white staff, he means “typically” as an average, otherwise there could not be cases of white men becoming full professors in their 30s unless they somehow earned doctorates in their teenage years. When the vice chancellor suggests that a black member of staff is too young to be a professor in his or her mid 40s, forgetting that white men can be professors 10 or 15 years earlier, he is recreating aspects of a system that we dismantled at considerable cost. And when Mr Jekyll uses the fact that 72% of UCT’s support staff, including secretaries and groundsmen, are black, in order to demonstrate the institution’s sincere desire to create a 72% black majority in the faculty, he can only be checking to see if anyone has noted the disappearance of Dr Price. In any event, it would take 1 000 years at the current net increase of half a new black academic per year.

There is one underlying truth that Mr Jekyll and Dr Price share with Helen Zille, and that to some extent explains their reluctance to engage with issues of discrimination and even racial violence in which our own students have been implicated. Trouble is general in the country, sparing few workplaces and neighbourhoods, political parties and other institutions. White recalcitrance cannot be the singular motive force for so universal a deterioration. Our inheritance from the National Party is the willingness to run institutions at low levels of legitimacy with respect to parts of the population – UCT has high legitimacy among most white faculty in my experience, but low legitimacy among its black staff and students – along with a love of inequality which makes us unwilling to submit to equality in the courts, on the roads, in the workplace. This hierarchy makes Mr Jekylls out of Dr Prices, as it did to Thabo Mbeki. The desire to maintain high legitimacy and the discipline of social equality are ways in which otherwise unequal societies like the United States and European countries keep their institutions healthy. Our love for privilege, any kind of privilege or exemption no matter how harmful, is decomposing the country before our eyes.

We may be unable to redirect the country, but UCT management can save the university from crippling polarisation by opening it to a reckoning with its recent history. The obvious candidates to lead such a process – Njabulo Ndebele, Adam Habib, Jonathan Jansen – being occupied, I nominate someone equally talented and familiar with the dilemmas and opportunities of transformation – the Max Price of 2008. The current vice chancellor has come out in favour of the removal of the statue because it is a reminder of what Rhodes did in the service of empire. Dr Max Price, however, will know that the statue has become active as a symbol of everything that UCT has left undone since 1994.

Main Photograph: University of Cape Town students during the #RhodesMustFall protests this week – from Twitter

Imraan Coovadia directs the writing programme at the University of Cape Town and his most recent book is Tales of the Metric System. View all posts by Imraan Coovadia →