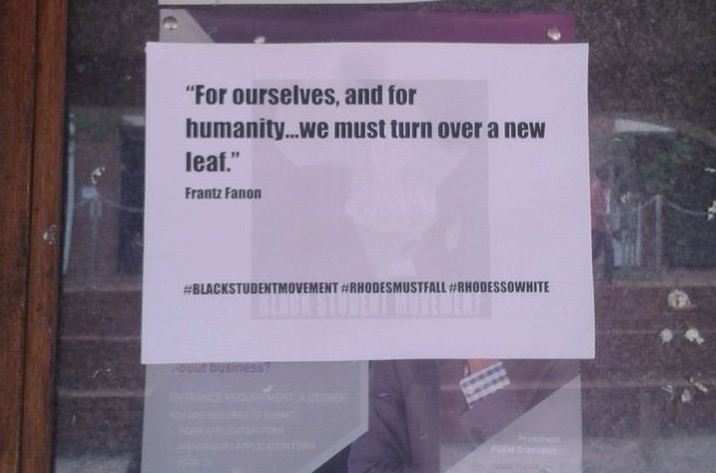 There has been much backlash against the social media campaign #RhodesSoWhite, which I started on a thread on the Rhodes SRC Facebook page. The rationale behind the social campaign was to expose the collective mental violence faced by black students at Rhodes University on all levels.

The backlash this campaign has generated exposes not only how white students are (wilfully) blind to the safety net created for them by being the embodiment of social, cultural, political and economic capital that comes from white normativity. It also exposes how white students on this campus still believe in the trope that racism is racism only if you are grotesquely overt in your disdain for black people.

The social media campaign attempted to show how racism exists not only on a macro level. Micro-aggression, or what I call “palatable forms of racism”, are as rancid as those who have the blood of our foremothers and fathers on their hands. The campaign was to bring to the fore the intersections of micro- and macro-aggression faced by black students on an institutional level, but also in their interactions with other students on campus. We must dispel the myth that palatable racism is not an assault or visceral crushing of black humanity.

Although not surprising, a majority of those who felt offended by the campaign have adopted a politics of erasure and silencing, which, if not derailing the legitimate experiences and lived realities faced by black students at Rhodes University, have also been used as a tool to balance the debate. This “balancing” of the debate demands black students to dislocate themselves from the structural violence imposed by whiteness, white imperialism, capitalism and white supremacy, and locate themselves in the lived oppression of white students at Rhodes University.

There are a number of implications that come with this burdensome demand. The most salient of these implications is the implicit demand made by white students to allow white normativity to mutate with ease, comfort and without resistance. This demand suggests further that although black students are in the process of constituting their subjectivity, the students must suspend the project of the humanisation of the self and understand that white students matter, too. This is a distraction. The very methodology of racism and the upholding of white supremacy works to distract the black political project of constituting and claiming black subjectivity. This, in and of itself, is the working of anti-black racism, which has unapologetically found itself comfortable enough to claim its space on the Rhodes SRC page and, by and large, a number of white students on campus.

Additionally, this social media campaign has also revealed the problematic logic of transcendence as a means of avoiding the discomfort of race. Many students are of the belief that South Africa is in post-racial era where race and racism are things we should get over. This transcendence is an attempt to banalise and conceal race and racism, to depoliticise history and its legacy while delegitimising the process of redress and restoring the dignity of those violently dispossessed. It is important to locate transcendence as avoidance within the national discourse of race among South Africans (white or black). In doing so, we are able to insert the particularities found in our universities into the national conversations of avoidance, denialism and erasure. These are the tactics being used by the Rhodes SRC when dealing with the issue of institutional racism and white normativity.

The trope “Our Blood Is Purple” is used by the SRC to create the illusion of homogeneity of the student body. The danger of using unifying symbolism is that they are an invitation to outside groups to assimilate into a normative culture that creates the illusion of inclusivity. This idea was cemented further at the emergency student body meeting held on March 19 with vice chancellor, Dr Sizwe Mabizela. Although the VC was sympathetic to personal experiences expressed by students on how they have been affected by racism, the burden of the colonial legacy of Cecil John Rhodes, and the lack of transformation of the institution, Mabizela went on to depoliticise and balance the debate by assuring the students that the colonial legacy of Rhodes the man was no longer attached to the brand of Rhodes University as the institution has distinguished itself as a bastion of “academic excellence”.

These responses from the SRC and the VC should not be read in isolation. Although they speak to a particular context, when understood in relation to the national discourse on race and the “rainbow nation”, these unifying symbols are used as homogenising agents to avoid the race issue. It should not come as a shock that this has been the dominant response of students at Rhodes and members of staff to the campaign. It is endemic of a citizenry that is non-reflexive, reductionist and invested in the depoliticisation of transformation and redress, thus making it unnecessary.

The presence of the Black Students Movement (BSM) and their call for transformation at Rhodes has challenged the myth of the university having an apathetic and apolitical student body. The BSM has also exposed how, in an attempt to quell the fears of bogeymen alumni who will disinvest from a transformed Rhodes, the institution will label the organising of these students as a “racist storm”. A letter sent to alumni, with the title “VC acts swiftly to avoid racist storm at Rhodes”, showed how, in an attempt to scramble for the now exposed and shattered myth of Rhodes being a home for all, the BSM movement will be read as racist. This was done to avoid self-critique and reflection on why Rhodes’ culture has not transformed even with the change in demographics. The letter and the barring of students of the BSM on March 24 from the administration building are important messages being sent to these students – that the institution will protect itself from those who wish to disrupt its culture. Although the doors were finally open because the students on reading their memorandum inside the building, it speaks to the reluctance of the institution to transform. The doors to transformation will not be open unless those who demand it are persistent in their resolve.

These conversations and forms of resistance from the students at the University of Cape Town and the challenging of the presence of historical artefacts of colonial violence should not be reduced to a removal of a statue, the changing of the name of Rhodes University, or social media campaigns. These are all entry points into broader concepts of transformation and black students laying claim to space, and the right for their space to be reflective of a transforming institution. When students call for “Rhodes must fall” and rally behind #RhodesSoWhite as a collective, we ought to look deeper into the cause and align ourselves with any movement that vehemently rejects the untouchable nature of white normativity and its hold on shaping the experiences of black students at Rhodes, UCT and society at large.

#RhodesSoWhite was co-opted from #OscarsSoWhite.

Lihle Ngcobozi is a first year Masters student at Rhodes University in the Department of Politics and International Studies. View all posts by Lihle Ngcobozi →