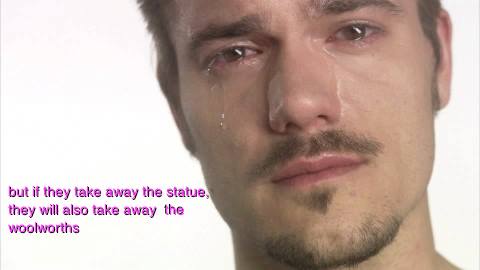 I will not attempt to offer “reasonable”, “well measured” and tight rebuttals to yours, Vivian de Klerk’s and, likely, your ivory tower white administration’s tacit endorsement of an enduring legacy of institutional violence. Those of us who are acutely aware of our structural and material oppression being black, being women, being disabled, being queer, being poor and being landless are also intimately aware that the function of such demands for “reasonableness” is to occupy and distract us, while the very systems of power and oppression that prop up those bodies that are white and male and able and heterosexual and wealthy and arrogantly occupy and live off the fat of land acquired through centuries of massacre and brazen theft continue to operate to secure the places of the privileged few.

I cannot express in words my rage and despair when I read your press release and listened to your defense of a name and a symbol postured as mere brand sufficiently dissimilated from occupation and theft, and enslavement and empire, and blood. So much blood.

Rage and despair are the sum of my response in the face of six years of duplicity from the seat of that well-appointed corner office, built on the barracks of His Majesty’s forces, formed to hold his ever-expanding line by any means necessary, which you now occupy and preside over.

Six years, Dr Mabizela. Six years I worked with and battled and was worn down and crushed by deans and directors, professors and lecturers, and especially administrators, like you, seeking to bring an end to the unyielding psychological violence of the physical space and celebrated symbols that would drive me to the Fort.

Six years I passed under that arch at the gateway of the Drostdy, crushed by the weight of the bodies of the forgotten thousands buried in the earth beneath, butchered defending their land and people from invasion. Six years I climbed up to that imposing stone ship on the top of the hill, to watch the sun rise over those battered woods encircling the dilapidated foot-high stone fountain in memoriam: that conquered wretch who drowned escaping his island prison, and whose memory was obliterated by the Frontier City, despite it now carrying his name.

Six long, arduous years where I watched black scholar after scholar, your wife among them, undermined, ridiculed and humiliated by children because they didn’t speak well enough, or their world-class scholarship was not relevant enough, or that their subject matter made them too uncomfortable – simply that they didn’t belong here. I remember the sole course addressing the contemporary sociological impact of the brutality of the colonial and apartheid regimes on black bodies being cancelled because white students and their wealthy, landed parents demanded it. I am haunted by the ghosts of the red-ochred men whose presence in classes and tutorials went unseen, but for ridicule, in those halls of enlightenment built on the bodies of their dead by the hands and the blood-wealth of their killers – bleeding out to the more broken, less hostile halls in Alice and beyond that felt much more like the hard but welcoming embrace of home.

Six hopeful years fighting for more than lip service to establish this as a Home for All, asking, demanding then begging for policies that would simply protect us from homophobia and continued victimisation by the disciplinary system after we were battered and raped and harassed by students and staff alike. In one of those years, in the aftermath of the Soudein Commission where the interventions of radical students, who were improvising with little to no institutional support, were claimed by administrators as their own transformation successes, but a colloquium on institutional culture and transformation yielded not one tangible result. Even the removal of the those portraits of scornful white men – the institution personified – from the council chamber was staged by women who, like this new generation of radical student interventionists, were simply tired of your scorn after years of repeatedly making the request politely. I sat before you, twice, giving this same testimony of the crushing weight of the wealthy white male quality of the institutional culture in that would-be Oxford in the bush. And you were “so, so, so, so, so, so, sorry”.

Six years in House Graham, that barbarous butcher we still honour by carrying his family crest. Six years of instruction from a pre-Makwanyane attorney general and his anecdotes on how he would dispatch then withdraw my people to and from the gallows. Six years of purple overalls, purple blood and purple colours generously bequeathed us by some Scottish prince come to survey the expansion of the empire. Six years, and more, carrying the name of that genocidal slaver who preferred land to niggers, and so expertly proved it.

I will not attempt to offer “reasonable,” “well measured” and “tight” rebuttals to “rational” explanations for why these symbols should remain, be they reimagined or even side-by-side with the new. Six years and its impact on this one living body of memory is enough to know intimately and unequivocally why Rhodes must fall.

Sekoetlane Phamodi is a black feminist activist who trained as a lawyer and, later, accidentally fell into journalism. He currently works as a broadcasting and media activist and can usually be found looking for justice in unusual places. You can find more of his writing on his blog mrphamodi.co.za View all posts by Sekoetlane Phamodi →