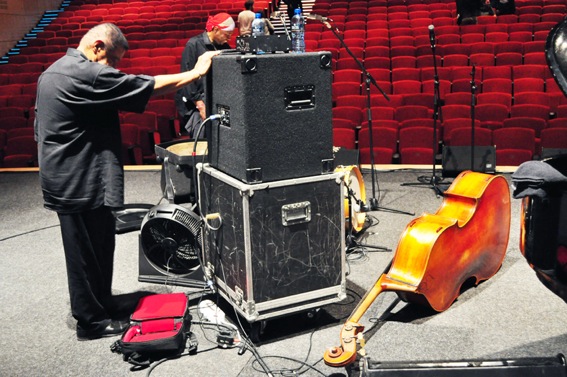 Statues are just lumps of stone for pigeons to shit on, right? Not quite. As theorists from Ferdinand de Saussure and Julia Kristeva to Roland Barthes and Stuart Hall have made clear, they are also signs, texts and narratives.

This year’s Cape Town International Jazz Festival opened during the campaign by the University of Cape Town’s Rhodes Must Fall iconoclasts to make the whole country confront and decipher a text: a stone colonial genocidaire1, solitary and massive, dominating and owning the skyline of a university campus. It was impossible to observe the music in isolation from this context. You also had to deal with the questions – about power, identity and ownership – that the text poses.

The questions started long before the stage performances of March 27 and 28, at precursor events such as the festival public debate. There, writer Percy Mabandu read from his forthcoming book, Yakhal’Inkomo: Portrait of a Jazz Classic. Mabandu had been scrupulous in working with the family on his text, and Winston “Mankunku” Ngozi’s youngest brother, Thulie, was a panellist, with other family members in the audience.

But the song remained contested territory. Audience members debated vigorously the ownership and precise Xhosa cultural symbolism of the bellowing bull. If the bull does not bellow at slaughter, the ceremony has not gone well – but we must also heed the bellowing of other bulls as they see their herd-mate sacrificed. And was Mankunku’s bellowing bull owned by its time, back in 1968? “No,” came the answer. “After events such as Marikana, the bull has not ceased crying.”

The Mankunku family was hurting too. First, because of Thembi Mtshali’s much-quoted lyric to the song, which depicts a rural idyll, rather than (in Mankunku’s own words) “the black man’s pain”. Yet part of the tune’s greatness is that it has become a standard. Like any jazz standard, other artists seek to make it their own. (How many versions of Giant Steps succeed even a little in saying what John Coltrane wanted to say?) For another panellist, Nomfundo Xaluva, it had been that very lyric, in Sibongile Khumalo’s version, which drew her to the musical possibilities of a tune she now sings. Her own way. 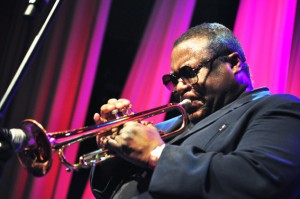 The hurt had deeper roots, however. The jazz festival featured a tribute concert to Mankunku, steered by his long-time pianist, producer and Jika record label partner, Mike Perry. The first the family had known of that concert was seeing it billed on a poster. That was the point at which audience members and panellists began invoking the UCT-Rhodes debates about power and ownership.

The debates were relevant. The world of jazz, not only in South Africa, is filled with instances of dead black musicians’ work appropriated by white players and industry bosses. Perry’s musical tribute felt genuinely loving and respectful in intention, but in terms of Ngozi’s culture, it came uncomfortably close to that paradigm. However cordial (or not) the reedman’s relationship with his family members had been in life, all aspects of his spiritual and cultural legacy are essential to kin and clan after his death. Western Cape Musicians’ Association head William Rezant commented later: “It was deeply insensitive. The family was ambushed by the event. We’ve held many tributes to other musicians, and you must always consult the family first, before you even announce it, and make them guests of honour.” Rezant, however, felt the responsibility did not rest on an individual: “The festival, legally, has ownership of how it plans and announces things. It should have ensured things were done properly.”  That word again: ownership.

And this debate was happening in Artscape: now with a transformed management team but historically a white cultural bastion. The Opera Bar was filled for the afternoon by a 150-strong audience from all Cape Town’s communities, moving the furniture to suit themselves and contributing to the arguments in isiXhosa as well as English. Did that change ownership? Of course not ­– but it sure as hell asked some questions about it.

On Saturday night at the festival, Thembi Mtshali encored her set with Victor Masondo with her contested lyric to that song. The audience loved it.

Identity boundaries were equally up for debate in the jazz festival concerts, because, in musical terms, 2015 was a year dominated by a great deal of liminal music.

Some was deliberate and expected: Carlo Mombelli and the (European edition) Storytellers drawing joyously on every stylistic influence from Zulu song to European art music; Sons of Kemet crafting no-boundaries free jazz built on a bedrock of hard bop; The Rainmakers playing melodic European folk over Afrika Mkhize’s percussive African piano; The Brother Moves On challenging their audience with powerful rhythms and forensically collaged words. (TBMO also have the distinction of being the first artists ever at a festival press conference to use, entirely appropriately, the terms “commodification” and “discourse analysis”.)

Others were more subtle and unexpected. Talvin Singh and Purbayan Chatterjee opened the doors to all forms of improvisation, from those shaped by the rising and descending notes of a raga to excursions underpinned by electronic loops, and even swaggering rock riffs on electric sitar, so that despite the advance branding, the performance defied pigeonholing in any nation or genre.

Singh spoke of his own work building bridges between communities in his late-1990s East London Monday Club gigs. “Everybody could identify with the sounds, because everybody has their own identity crisis. And considering these contested identities helps us all to ask: ‘What are we fighting over? It’s all about money – somebody else’s money!’” 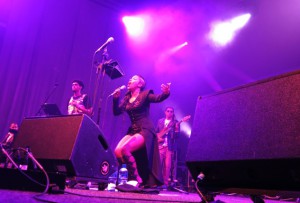 Wordsmith Jitsvinger and Melanie Scholtz provided wonderful examples of the ways jazz and flows could blend, on stage and off – “like skipping in a Rolls-Royce,” Jits called it. “My musical world’s more loose and informal than Melanie’s,” he explained. “Maybe,” added Scholtz, “but he’s taught me to think on my feet, like he does.” Jitsvinger’s blending is more than stylistic: in his press conference, he demonstrated how he could add sonic and historical resonance to an Afrikaans lyric by substituting the ‘K’ sounds with Khoisan or isiXhosa clicks.

Some bands stayed more closely within traditions. The Wallace Roney Quintet played a classical festival-closing jazz set. It was precise and erudite in its references to the heritage and canon, and followed the classic head-solos-head format – but it flew, tantalising us to see the music’s complex inner architecture as it brought every number gracefully back home.

Yet it was Roney and his rhythm section, the masterful duo of bassist Buster Williams and drummer Lenny White, who best gave insight to those ownership debates. “Black music belongs to the world: to everybody who takes it into their heart,” said Williams. “But it wouldn’t exist without someone starting something – the African-American people. You cannot deny what happened in the past.” 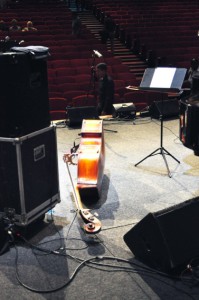 “When we talk about history,” added White, “it’s too often created by the conquerors. But if Africa is the cradle of civilisation. then all things, not just music, come from Africa. And yet jazz music is conversational: you don’t need words. It’s a conversation between four musicians on a stage. [Within that conversation], I play my heritage. As in African tradition, I learned what I say from the masters. When you talk about ‘ownership’, you purchase something, and then you ‘own’ it. That isn’t what we’re talking about here.”

If, as Hall wrote in Cultural Identity and Diaspora, “identities are the names we give to the different ways we are positioned by, and position ourselves within, the narratives of the past”, a great many important dialogues about identity – sonic, symbolic and verbal – were started this year in Cape Town. How many people were listening?

1When smallpox hit the De Beers diamond fields in 1883, Rhodes and Jameson deliberately colluded to suppress all information about the outbreak, for fear it would keep away African labour and trade. (“We will not get wood from the Basuto [sic] women, and the mines will have to close…”) At least 600 workers (associated family and community deaths were not recorded) died from smallpox

All photographs by Rafs Mayet

Main Stage: Bassist Buster Williams from the Wallace Roney Quintet communing with the musical supernatural after their erudite and precise referencing of heritage and canon during their set

Second Act: Wallace Roney, a firm believer that Black Music belongs to all those who take it into their hearts

Trio: Melanie Scholtz thinks and sings on her feet in her collaboration with Jitsvinger at the CTIJF

Four-part Harmony: History… After the gig