“I don’t agree with violence, but I did participate because there was the safety of a group situation,” says Kabelo* last week in Durban.

Standing near a peach-coloured house recently defiled in Chatsworth’s Bottlebrush area, Kabelo says the house was previously inhabited by Zimbabwean nationals before they were violently hounded out. Kabelo surveys people attempting to fix the damage that he admits to being a part of, his Figaro gold chain resting high on his T-shirted sternum.

“I knew that if we didn’t go that route, the government would have done nothing to ease the situation,” he adds. “Had we asked nicely, according to anyone you ask here, nothing would have happened. There would have been the same excuses laid out, as there usually are. That’s why people felt like: ‘This grass is dry – let’s reawaken it with some fire.’”

For Kabelo, a security guard, “the situation” he is referring to is the usual litany of gripes: foreigners taking their jobs; foreigners subdividing back yard houses then sleeping and trading in them; foreigners bribing their girlfriends and sisters with money. This situation led to the violence against foreign nationals that recently erupted, first in KwaZulu-Natal, and then spread to areas in and around Johannesburg. So far, seven people are said to have been murdered, a figure foreign nationals trapped in refugee camps say is a gross understatement.

Kabelo says in his Chatsworth neighbourhood “people started simultaneously breaking into shops and beating people off the streets. Then later on in the morning, maybe around 6.30am, they moved into the houses, taking whatever they could find,” he says.

The attacks, which moved like a wave over the Durban settlements of Isipingo, Umlazi, Chatsworth and others, left thousands of  foreign nationals displaced, fearing for their lives and, in many instances, with nothing more than the clothing they were wearing.

A man identifying only as Albert, a Mozambican national and resident of Chatsworth since 2007, was on the other side of the panga blades. He had fled to Clermont when the attacks caught up with him and his younger sibling. “My younger brother, my blood brother, his child had just been born three days before they came to his place. They took everything. Every single thing,” says Albert, a brown acoustic guitar slung behind his back.

“They even wanted to beat him up. A neighbour who knew him begged that they don’t hurt him because he had the three-day-old baby in his hands. His girlfriend was holding the other one. They had kicked in the door to come in, so they let them out and started helping themselves to their things. The cooked food they found, they ate. The uncooked food, they took. They left nothing, absolutely nothing behind. They took my little brother’s baby bag,” says Albert.

Standing in the camp set up for displaced foreign nationals in Chatsworth, Albert appears to be surveying a life left with only detritus. “So I don’t know if it really matters any more because we’re leaving anyway,” he says with an air of finality.

People – black African refugees from homes wracked with violence and death – have been killed in South Africa these past few weeks. Thousands more have had their homes and livelihoods wrenched from them, along with their humanity.

There have been suggestions that the violence was a response to Zulu King Goodwill Zwelithini’s speech in Pongola on March 20 when, while addressing a public gathering, he criticised foreign small businesses in South Africa and asked “foreign nationals to pack their belongings and go back to their countries”.

Speaking to The Con, a source in the king’s royal household dismisses the king’s own power to incite: “This xenophobia thing has been an ongoing problem for some time, and people always need somebody to pin this thing on. Had there been no xenophobic violence, people would have moved on because the king makes controversial comments all the time about gays and so on, just like President Jacob Zuma,” says the source, admitting that “these comments are borderline inflammatory in a time like this”.

The household source suggests the real reasons behind the attacks were socioeconomic, or a response to acts of violence by foreigners themselves. “If you look at it factually, what triggered these events in Umlazi is the same thing that triggered them in Soweto. It was a response to a robbery situation where foreigners shot a local during a robbery. [On April 9, looting escalated in Umlazi following the shooting of a 24-year-old woman, Ayanda Dlamini. The shop owner claimed he was being robbed by four suspects and shot them in self-defence, killing the innocent Dlamini accidentally. In January in Soweto, a Somali shop owner shot 14-year-old Siphiwe Mahori from the inside of his shop as he was being robbed, sparking a wave of xenophobic violence and looting]. Then in Isipingo, you have a strike where the owners of Jeena’s Warehouse are said to have put in foreigners after the locals went on strike.” Chronologically, the Isipingo incident transpired first.

“So while the king did make disparaging remarks about foreigners, his preceding remarks were about lazy South Africans who can’t work the land, which leads to people coming here to harvest opportunities. I’ve listened to him speak all the time, and he’s very crude and unpolished. In fact, Zuma is a more polished version of him,” says the source.

Kabelo also seeks to justify his actions along socioeconomic lines. “I’m not saying what we did was right, but there were too many of them in our neighbourhoods – to such an extent that we no longer had ways of making an income for ourselves,” he says.

“If the borders could be tightly controlled, I would help and then they must switch up their attitudes and stop acting like bosses once they’re here. Because now, we look like we’re the visitors in our own country. We know the societal issues that were not prevalent before their proliferation here as immigrants,” he smiles, referring to drug dealing.

While the violence has been characterised by brutality and trauma inflicted upon some of society’s most vulnerable – African immigrants – it has also exhibited links to very localised politics. In Johannesburg’s Jeppestown area, residents from the Wolhuter men’s hostel, largely Zulu, suggest their looming evictions linked to the Maboneng expansion and gentrification project was also a motivating factor.

Two political sources in KwaZulu-Natal suggest Zwelithini’s messaging in Pongolo was as much to the “Zulu nation” as to the political establishment in the ANC-run KwaZulu-Natal. It was an echo of how ungovernable the province had been in the 80s and early 90s as the apartheid state pumped money, training and weapons to the Inkatha Freedom Party as it waged a bloody internecine battle against United Democratic Front communities that left thousands dead.

Zwelithini, it is suggested, was intent on pushing the political establishment in the province towards recognising his authority so as not to mess with either his financial or political autonomy. Zwelithini’s multimillion-rand household budget comes from the provincial government’s coffers and has been threatened by cuts and an attempt to make the monarchy self-sufficient following years of overspending.

The royal insider points towards Zwelithini’s hubris when he tells The Con: “In the previous era, King Goodwill Zwelithini was tightly managed. [IFP leader Mangosuthu] Buthelezi had a tight leash on him because he knew he was a loose canon. They’ve had a beef lasting for years, because Buthelezi has always treated him like a child. It’s only recently that he’s been let loose on the public with no one to follow him closely from behind.”

On Monday, Zwelithini addressed an official imbizo at Durban’s Moses Mabhida Stadium. With the crowds booing foreigners, people of other ethnic groups and Buthelezi himself, the event was stage managed to allow Zwelithini to “command the silence” of the crowds, as several television stations reported.

The event re-enforced Zwelithini’s apparent campaign to cast himself – in the context of an encroaching traditionalism within South Africa’s constitutional order, aided and abetted by politicians like Zuma – as a power, and law, unto himself.

And through his egotism, he revealed a horrifically sinister streak: “If reports that I incited the violence are true, this country would be ashes.”

“Even before things became violent, it had been announced for at least two weeks that they must go. People had been saying the king started it off with his remarks, but in the ensuing weeks, these people just stayed here and made no attempts to move. That’s why things ended up as they are,” says Kabelo with a nod in Zwelithini’s direction.

The untrammelled speed with which the violence spread in KwaZulu-Natal has also flagged concerns about behind-the-scenes political power plays.

Anuri Djuna, a Congolese businessman based in Isipingo outside Durban, remembers how there was a “concerted effort” by government to ensure the looting and violence didn’t spread during the xenophobic attacks in 2008. “People from [South African Police Service’s] crime intelligence were much more involved and alert. They were interviewing people, collecting information. You got the sense they were really trying to prevent the situation from spreading.

“In Isipingo, we knew people who were willing to attack us, but provincial officials, social workers, human rights workers and the police met with us. They also went from house to house, collecting information, they phoned us and checked on people, asking ‘who’s planning to attack you’ and so on. With these attacks, police were standing by. When we asked why they did not do anything, the one actually said to me, ‘I have not been instructed to do anything’,” says Djuna.

This piece was a collaboration between numerous contributors to The Con 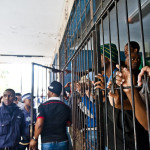 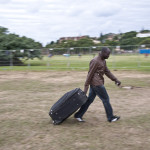 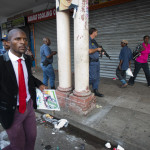 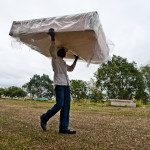 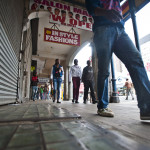 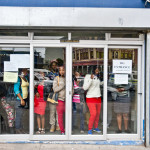 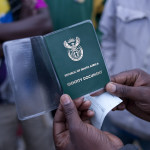 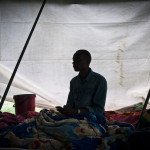 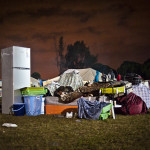 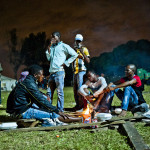 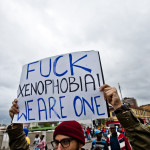 *- Names have been changed