The unused, broken, cooling towers off Harvey Street in Bloemfontein wear the tattered dress of hubris and violence. Save for John Dube and Albert Luthuli, the drapes that once showed the faces of previous ANC presidents are frayed, ripped to almost nothing, and trail in the wind like the shredded clothes of a survivor of a brutal assault. Many of the faces have long disappeared.

They were unfurled in 2012 in time for the ANC’s national elective conference in Mangaung. Three years later, what remains of the demonstration of public (ANC) nationalism is a reminder that empire is transient. It evokes Percy Bysshe Shelley’s sonnet Ozymandias: of “the shattered visage” where “nothing beside remains. Round the decay/ Of that colossal wreck, boundless and bare…”

Situated in downtown Bloemfontein, the towers, however, loom over taxis hurtling by during rush hour, people dashing to catch transport back to their townships and punters headed for post-work drinks at watering holes like Ma’Jimbos tavern. The Wesleyan Church where the ANC was founded in 1912 also lies in its shadows. Almost everyone on the streets is black.

Yet this is the very ground from where one of the first evictions of a “black settlement” in a formalised “Bloemfontein” had occurred. The residents of Waaihoek were moved to the township of Batho in 1917, their homes replaced by industrialised modernity and expanding white privilege.

Bloemfontein is a city of statues and museums, of memory cast in bronze.

Adding to an ever-growing number across the country, there is yet another statue of Nelson Mandela, this one looming over the city at Naval Hill. Apparently commissioned and paid for by a local businessman, it looks like a gargantuan primary school project – awkward and devoid of meaning outside of iconography, as banal as the reductionist “reconciler” narrative that followed Mandela to his grave. It is a framing that has aided white amnesia and unaccountability for apartheid, and has denied the black experience of a traumatic past a proper voice.

Across town, at the Oliewenhuis Art Museum, a military wedge of bronze sculptures appears to be marching up the lawn towards the neo-Dutch mansion that, before its conversion, was the former home of the governor general of the Union of South Africa.

Part of Dali Tambo’s National Heritage Monument project, the army of statues is reported to cost as much as R600 million. At least R28 million has already been spent on the project by the department of arts and culture.

There are kings, queens and Bible bashers enforcing militarism as heritage, hereditary hierarchy as acceptable, traditionalism cast in bronze and religion as liberation – all, instinctively, the most conservative of societal constructions.

The few intellectuals and thinkers out there are largely linked to the ANC, such as Sol Plaatje. The ordinary person is excluded despite their extraordinariness.

Some statues have biographies, some don’t. Most are made by white artists. Behind what appears a looming King Shaka statue are Plaatje and Thomas Mapikela, a founding member of the ANC and Bloemfontein local. Then, in the next row, there are statues of three women with no biographies; they remain anonymous.

It is difficult to extract these memorialisations, and the latter-day hegemony they represent, from the statues of Boer Republic presidents and generals that litter the city. Or from the public propaganda of the apartheid regime.

It is “significance” insisted upon in bronze and pandering to a lavish neo-colonialism. Public edifices negating a more engaged, inclusive and egalitarian approach to the notion of “public” in public art through their stuffiness.

Tambo’s described the project to the Financial Mail last year: “Heritage is the show business of history, and I am into show business,” said the son of former ANC president Oliver Tambo.

In the interview, he explained that he conceived the project after being disturbed that there were no public likenesses of his father in South Africa. “Growing up in exile and seeing so many statues celebrating historical figures, I regretted never seeing a black man in bronze,” he said.

A statement worn on a T-shirt by one of four young kids lends profound meaning to the giant statue of General Christiaan Rudolf de Wet under which they stood on President Brand Street: “Eat. Sleep. Conquer. Repeat” – a searing indictment of the hegemonic instincts of successive patriarchal regimes, whether oppressors or liberators.

Does one really matter only when one is bronzed – as if life needs to be book-ended by bronzed baby shoes and then busts? It is a question, along with many others, artist Sylvestre Mqeku is responding to with a project spanning Bloemfontein’s history from 1861 (the certifiable date of the oldest photograph taken in Bloemfontein) to 1982 (when 42 people – 30 South Africans and 12 Basotho – were murdered by the South African Defence Force in Maseru).

The project seeks to explore the context of “disruptions” in Bloemfontein that are barely acknowledged by mainstream historiography – like the 1913 women’s march against pass laws that had been in effect since the 1860s, or exclusionary ones like the formation of the Union of South Africa – and record oral histories from ordinary people who shed light on an ignored alternative history.

Mqeku’s project is one of five being explored through the 2014 Ways of Being Here initiative. It includes high school students who will eventually interview and record these alternative histories before using them in a series of visual art, poetry and theatre productions.

Following visits to local museums and art galleries, weekend workshops have just begun. But Maleshoane Mphutlane, aka Ladybird, a poet working with Mqeku, bemoans the level of curiosity public schools are inculcating in children’s minds: “There is a sense you don’t need to know anything, because you can Google everything,” she says.

Another poet, Morena Moabi, aka King, says children are sometimes allowed to answer school tests by using Google because teachers believe it’s the “era of technology” – or, perhaps more fittingly, the error of technology.

The crew of young, black art practitioners working with Mqeku has been trying to cajole, inspire and challenge the schoolchildren to enquire. The children often define and lead the process. The ethos implies that if you don’t ask, you’ll never know. The poets are also tracing a history of linguistic erasure in Bloemfontein, exploring why some English and Afrikaans words are used contemporaneously instead of their Sesotho or seTswana equivalents, and when and why these shifts occur.

Ladybird jokes that she’s hit upon a great research method: at local clinics, she is bound to find the elders to interview about the words they use and those that have been lost to time to get an idea about the spread of code-switching and urbanism.

History as erasure and ignoring is palpable in Bloemfontein’s streets. And its museums. The National Museum is stuffy in its re-enacted exhibits of life 100 years ago. Its 1920s street scenes with its blacksmiths’ forges and white colonial homes is sedentary, stuck in the past and oblivious to challenging, dynamic alternate stories.

A new exhibition of Batho location – the most lively and interactive part of the museum – appears tacked on, taking up just a sliver of the gallery.

Rifling through a photographic book documenting Bloemfontein’s history, which Mqeku is using as one of several source materials, it is instructive that the first image of black person appears only on page 88.

“It is dangerous to suggest that black and coloured people had no way to imagine and document themselves. Did black people contemplate, internally, themselves at all? That is a question that is part of our study. It is definite that these people contemplated their existence, but the absence of photographs that told their stories, in a way, jailed their stories to an outsider [English and Afrikaner] agenda,” says Mqeku.

Mqeku is attempting to move away from a myopic history intended to consolidate mainstream political power through holding a vice grip on memory. It is how the National Party, also founded in Bloemfontein, operated, and what the ANC is increasingly doing.

By working with young arts activists and schoolchildren, the project also renders a more inclusive definition of “public” in conceptualising the idea of “public art”.

It is a method that echoes the thinking of former Guinean president Ahmed Sékou Touré: “To take part in the African revolution, it is not enough to write a revolutionary song; you must fashion the revolution with the people. And if you fashion it with the people, the songs will come by themselves, and of themselves.” 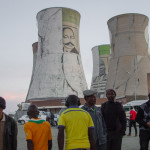 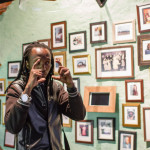 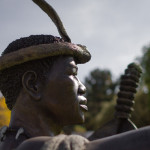 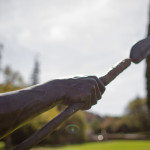 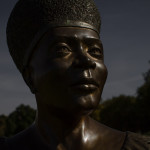 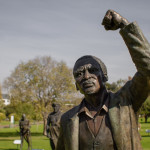 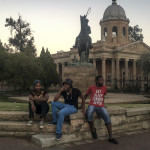 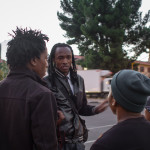 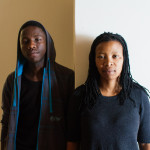 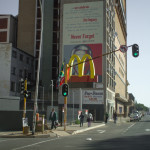 Gifs and photographs by Dean Hutton