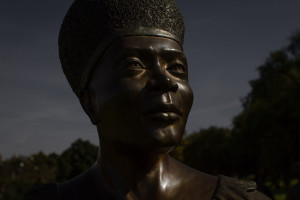 Queen Regent of Swaziland Labotsibeni Mdluli – At the Oliewenhuis Art Museum, a military wedge of bronze sculptures appears to be marching up the lawn towards the neo-Dutch mansion that, before its conversion, was the former home of the governor general of the Union of South Africa.
Part of Dali Tambo’s National Heritage Monument project, the army of statues is reported to cost as much as R600 million. At least R28 million has already been spent on the project by the department of arts and culture.

There are kings, queens and Bible bashers enforcing militarism as heritage, hereditary hierarchy as acceptable, traditionalism cast in bronze and religion as liberation – all, instinctively, the most conservative of societal constructions. Photograph © Dean Hutton