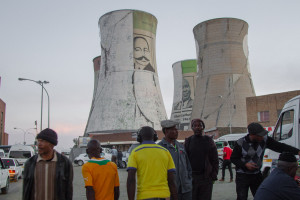 The unused, broken, cooling towers off Harvey Street in Bloemfontein wear the tattered dress of hubris and violence. Save for John Dube and Albert Luthuli, the drapes that once showed the faces of previous ANC presidents are frayed, ripped to almost nothing, and trail in the wind like the shredded clothes of a survivor of a brutal assault. Many of the faces have long disappeared.

They were unfurled in 2012 in time for the ANC’s national elective conference in Mangaung. Three years later, what remains of the demonstration of public (ANC) nationalism is a reminder that empire is transient. It evokes Percy Bysshe Shelley’s sonnet Ozymandias: of “the shattered visage” where “nothing beside remains. Round the decay/ Of that colossal wreck, boundless and bare…”
Photograph © Dean Hutton