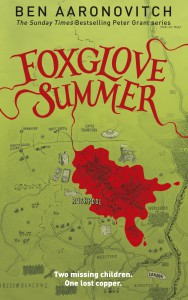 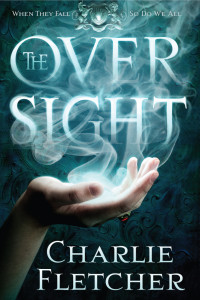 That phrase cues the reader in on the character of Grant and of Aaronovitch’s Rivers of London novels, of which Foxglove Summer is the fifth. Grant is a smart, slightly magically talented London detective who has become the first English apprentice wizard for a very long time at The Folly, home of the UK’s magical police. The author is in the bathos game, managing some deft juggling between the high fantasy of faeries, spirits and magic, and the mundanity of realistic police procedures. The books are written in a dry, very English voice that has left some US reviewers bemoaning the lack of high emotion and drama. Somehow, they miss the point of deadpan.

Foxglove Summer takes Grant into Midsomer Murders territory with a tale of missing children in rural Herefordshire, faerie circles, and unicorns wholly unlike My Little Pony. To say more would be to spoil the plot. But Aaronovitch’s gift goes beyond spinning a neat and often laugh-out-loud witty tale. His writing also reflects an England real in its diversity, sometimes to subversive effect. Grant has a Sierra Leonian mother and is very conscious that in such settings he is conspicuous and not always welcome. But he is also a policeman who needs to describe suspects – and for him, “white” is a valid descriptive marker rather than being normalised into hegemonic invisibility. It’s a nice touch, as is the way Aaronovitch asserts the deep historic presence of people of colour in London – they are so much a part of the landscape that some have assumed near-divinity as river goddesses.

Aaronovitch’s plotting can sometimes leave small, niggling loose ends, but as the series progresses it is becoming clearer that these are often hooks for reveals in a subsequent book. The author cut his teeth writing for episodic TV dramas such as Dr Who and Blake’s 7, and this is a device from that trade that has stayed with him. Having started, you will want to read the next one.

Charlie Fletcher’s supernatural police are a small force called the Oversight, and they inhabit a Dickensian steampunk London – although with not much steam; the technology, apart from the odd golem, is more metaphysical than physics-driven. Fletcher won fame with his young adult series, the Stoneheart trilogy. This book (intended for adult readers) draws some of its theory of magic from that series – in particular, the existence of “Glints” who can read the history of a place by laying hands on it.

London and the countryside are the setting for a long-running war between the Oversight, who guard important magical keys, and various villains seeking to seize and use the keys. However, the magic takes second place in this opening volume to a wonderfully vivid diorama of people and settings.

Dickensian is not only the right term for the setting and the scope and intricate sprawl of the plot. With beautifully etched characters called the Pyefinches (carnival folk), Blackdyke, and a villainous clan of witchfinder-lawyers named Templebane, Dickensian (with a hint of Wilkie Collins) describes the mood and voice of the book too.

Though both are distinctively English in their voices, it would be hard to find a more marked contrast to Peter Grant’s laconism than Fletcher’s rich, almost Victorian prose. “It was raining with a peculiar viciousness,” he writes, “as if the blustery night had a score to settle with the small and often overlooked county of Rutlandshire…”

Where Foxglove Summer is a swift, satisfyingly entertaining read, The Oversight is a mirrored maze within which readers can lose themselves. Clear outlines of all the histories, secrets, plots and subplots begin to emerge only as the 500-page volume ends, but Fletcher has created a fascinating ride. 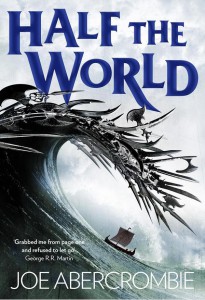 With Half a King, the first book in this trilogy, Joe Abercrombie – already the acclaimed author of half a dozen books for adult readers – entered the young adult market. He muted his customary violence only slightly in the coming-of-age tale of Yarvi, a crippled princeling forced to flee treachery at court. That book ended with Yarvi – by this time not quite 20 – getting only small, bitter and unsatisfactory revenge on his enemies, and taking his vows as a Father: male member of the more commonly female ascetic order of Mothers providing court advisers and diplomats across his world.

In a neat mirror image, Half the World follows the coming of age of another protagonist subverting gender expectations: Thorn, a young woman warrior. She, too, is bent on revenge: against the enemy who slew her heroic father. But before she can achieve that, she must graduate from a sadistic military academy where Abercrombie stays silent about the rape culture that pervades such places. She accidentally kills a fellow cadet and ends up Yarvi’s servant and pawn in return for her life.

That’s not the only distorting mirror between the two books. For the still-young Yarvi is now a calculating manipulator of others in the service of his state. He is hardly morally superior to the Mothers who were his childhood nemeses. Through the eyes of both Thorn and Brand, another disgraced former cadet, we see how well Father Yarvi learned his lessons, with no easy answers about whether or not he is ‘right’.

Half the World is a more substantial book than its predecessor, in both actual length and moral complexity. There is very little about it that signals ‘young adult’ – Thorn even gets a fumbling, funny and recognisably adolescent sex scene – and it is far removed from the individualistic, anti-dystopian bravado currently dominating the commercial end of the genre. The books make most sense read in order, and the finale, Half a War, is promised before the end of this year.