There’s a touch of bitterness that runs through Sam Nzima as he once again takes questions on possibly the most iconic South African photograph.

On 16 June 1976, Nzima was on assignment for The World newspaper in Soweto covering the students’ march when police opened fire on the demonstrating students. One of the key themes of the march was the impending legislation that would force them to take some lessons in Afrikaans. The march, which would spark protests around the country that would leave hundreds of people dead, was a significant turning point in the struggle against apartheid, politicising thousands in communities across the country. It also inspired many to skip the borders of South Africa, joining the banned liberation movements.

“Sam had become a cosmopolitan person, but he had to come back to a different life,” says journalist Heidi Lee Smith, who has tried to manage copyright issues around the usage of Sam Nzima’s 1976 pictures. “There was a whole domino effect on his life as a result of having taken that photograph.” Seventeen years after securing the copyright to his image, Nzima still does not have the adequate machinery to look after the proceeds his photograph(s) could generate.

Smith, considers herself an “amateur” who is simply passionate about Nzima’s work. “I would estimate that he has lost millions of rands and dollars over the years, as well as losing his career,” she wrote in an email. “His picture is currently being published in a coffee-table book by Time magazine – a book of the top 100 photographs ever taken – yet he is by all accounts a ‘poor’ man.

“Of the 100 pictures, they are making a short documentary clip about 10 of the photographers, of which Sam is one. The photograph has also been previously rated by Time as one of the five most powerful photographs ever taken. Interestingly, when Time interviewed Sam I went with them, and he has in his possession the original Time mag from June 1976.”

On 16 June 1976, after a few hours interacting with and photographing the marching children, the situation, at least in the section of the march Nzima was in, descended into chaos, as he told journalist Botho Molosankwe. “A guy with a stick under his arm told the schoolchildren he was giving them three minutes to disperse. The defiant children began singing Nkosi Sikelel’ iAfrika before all hell broke loose as the man reached for his gun and began shooting and shouting ‘skiet’.” 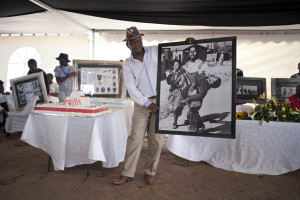 Anticipating police censure, Nzima kept the film of the dying Hector Pieterson in his sock, and his photograph was published the following day in The World newspaper, and later throughout the world itself. The photograph would profoundly alter the lives of everyone it featured. Mbuyisa Makhubu (the 18-year-old boy carrying the dying Pieterson) would be harassed by police until he fled the country, never to return. Antoinette Sithole, Pieterson’s sister, now works at the museum built partly in her deceased brother’s honour, while Nzima felt the wrath of the law, which brought his journalism career to an abrupt end.

Nzima says the directive from the apartheid regime issued to the police at John Vorster Square (now Johannesburg Central) was: “If you find him taking a picture anywhere, kill that bastard.” After returning to Lilydale (in Mpumalanga, then eastern Transvaal), Nzima was discovered by the authorities and placed under house arrest.

Thulani Nzima, Sam’s son, says: “By the time we got the copyright, those who wanted to use the image for commercial purposes had already extracted the value. The second thing is that it took about 18 years for even our own government to finally recognise Sam Nzima as the man behind the picture, while he is still alive. Next year it will be 40 years since that picture was taken. In that time, we have seen various applications of the picture, some without even asking for copyrights, and I’m talking even from our government structures.”

Smith says on the 30th anniversary of 16 June 1976, the government used his image in multiple campaigns “and did not ask if they could use the image, nor did they offer to pay him. Fortunately, I had been able to get Adams & Adams copyright attorneys to take Sam’s cause under their wing, and they got the government to pay a meagre amount.”

“When my dad eventually stopped working as a journalist, he immediately said, ‘I need to have the copyright’, and The World told us we have no rights, so we fought,” says Thulani. “Even for the right to use the image to print T-shirts was a problem. The Argus group owned The World newspaper, and they owned others such as the Rand Daily Mail and so on. So somewhere in between, we have fought with our own black brothers who told my dad he had no copyright and he wasn’t going to get one. I’m not going to mention names, because some are still alive.”

In 2013, Nzima’s photograph became the inspiration for a petition to lobby the department of trade and industry to amend the Copyright Act (1978). Section 21, 1b to d, gives copyright to the person who commissioned the photograph in respect to publication and reproduction – a draconian approach.

In a cage behind Sam Nzima’s bottle store in Lilydale (his business since leaving photojournalism behind), there is a larger-than-life dolomite sculpture inspired by his photograph. But the anguish in Makhubu’s face is gone; his mouth is merely open as if in shock, and he has a faraway look. As in the photo, he dwarfs both Sithole and Pieterson, whom he is holding. Save for some interpretive lapses, the statue is impressive, and has some incredible details – from the stitches in Makhubu’s dungarees to the peppercorn curls on Sithole’s head. Caged, covered and hidden from history, the statue, weighing more than 2 tonnes and standing taller than 2 metres, it is the work of Norman Nyamaku, a Zimbabwean artist who sold it to Nzima. It has been standing in its inglorious spot for about nine years, waiting to take its rightful place, perhaps at the entrance of a proposed school and museum Nzima hopes to build in Lilydale.

But for now, it is as a sad reminder of this government’s conflicted relationship with June 16. Nzima says that at some point, when Pallo Jordan was the country’s minister of arts and culture (between 2004 and 2009), terse meetings took place, where Jordan tried to negotiate for the handover of the statue – for almost nothing – either to the Hector Pieterson or the Apartheid museums. 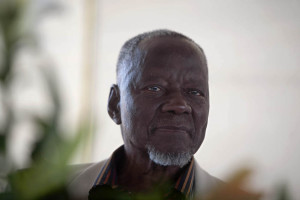 For Ntsiki Makhubu, Mbuyisa’s sister, who was there when the Nzimas briefly unveiled the hidden statue to the public, there was the pain of reliving her brother’s anguish and eventual disappearance. There was also the question of sharing the spoils of a photograph that has united three families that were complete strangers 40 years ago.

“The Makhubus have approached us for copyright to use the image to tell their own story,” says Thulani Nzima on behalf of his father. “My response to them was that we’d like to see the execution of how they’d like to use the image, because the value of the image is in its full context. When we first met, I said, ‘Don’t stress, because we’ll also make sure you have access to the picture.’ That access must not diminish the copyright of Sam Nzima; we cannot have equal copyright to the picture.”

This time last year, Mbuyisa Makhubu’s now deceased younger brother, Raul, endorsed a march to Soweto’s Maponya Mall to campaign against the use of the image (in the form of a statue based on Nzima’s photograph at the mall) and the use of the images at the Hector Pieterson Museum. It was a row that split the already feuding family even further, with Makhubu’s sister Ntsiki quipping, “The statues and so on do not belong to us. They belong to South Africa. Whatever is missing in our households should have no bearing on the national symbols. Mbuyisa is our brother, but he is also a national hero. So his statue stands.” The statue was eventually removed from the mall in October. Raul Makhubu had demanded “accountability of profits, revenue and other funds received from the 1990s to the present date from the unauthorised name use [of Mbuyisa Makhubu]”.

Khwezi Gule, the chief curator of Soweto museums, said these rows present opportune moments to raise issues about how the legacies of people connected to South Africa’s liberation struggle ought to be handled. “Even [former South African president Nelson] Mandela tried hard when he was alive to distance his family from his legacy. He established the Nelson Mandela Centre for Memory [a digital archiving project], and the work of the [Nelson Mandela] Foundation was to receive gifts and keep his memoirs and so on. None of his children or wives have those archives, and none of them serve on the board. He was smart in doing that, because it avoids these kinds of things. The Luthuli family, however, is involved in the Luthuli Museum [named after ANC president and Nobel Peace Prize winner Chief Albert Luthuli], and Winnie [to an extent] is involved in the Nelson Mandela Museum.”

To erect a statue of Winston Churchill, for example, you go to a foundation, not a family, says Gule. “Even for artists, take for example the Andy Warhol Foundation, it’s not about them getting compensation. The erection of a statue is compensation enough, and an honour actually. What creates problems is that the families want compensation, and who do you listen to when there are factions? [And when the elders are deceased, such as in the Pieterson family], do you listen to the mother or the rakgadi [the father’s sister]? Who is responsible for the family as a whole? In Xhosa culture, for example, it is the leader of the clan, but what if someone doesn’t subscribe to that? You can’t leave it to traditional leaders, but how do you come up with a policy?”

Seth Mazibuko, a 1976 student leader who has since been involved in various organisations geared towards keeping that uprising’s legacy alive, says the country still does not have a structure related to 1976 that effectively deals with issues relating to it. Of the statue that was removed from Maponya Mall, he says, “Maponya Mall as a business needed to follow certain protocols as opposed to just putting that statue in a lobby where people were doing promotions and commercial work around it. People were respecting the elephant outside the mall more than the statue itself. Were any national heritage bodies involved? And the people of 1976, were they consulted?”

All Pics by Oupa Nkosi

Main Pic: A statue based on Sam Nzima’s  June 16 photograph is unveiled for guests at his birthday party. Nzima hopes to place it prominently in a school and museum dedicated to the memory on June 16 1976 that he is planning to build.

Take Two: One of Sam Nzima’s children holds up an image of one of Nzima’s photographs from June 16 1976 during a fundraising session in Lilydale on the occasion of Nzima’s 80th birthday.
Take Three: A contemplative Sam Nzima, the man behind one of the world’s most famous photographs, listens as people recount his heroic life during a birthday dinner in Lilydale.