Charles Sekano is the archetypal African artist. His beard is a broken cloud of grey fluff coiled around the subdued warmth of his smile. His is the sum of all our greatest artists, with a face that’s recognisable almost everywhere but at home, and a mind that’s yielded fortunes for the pockets of men with faces white enough to broker deals for black genius.

Sekano is in the purgatory most exploited African artists find themselves in. He is waiting to die so that his art can sell for a fortune. Many of our greatest artists died in poverty, not because of their own pecuniary recklessness, but rather as a consequence of predominantly Western corporate vultures cunningly capitalising on their circumstantial lack of awareness of intellectual property law. Bheki Mseleku, arguably the most prolific South African jazz artist of our time, sold millions of records for the British record company that managed him, but he died without seeing a cent of that money. Solomon Popoli Linda, who composed The Lion Sleeps Tonight, died without ever receiving any of the royalties due to him. Thami Mnyele, Mahlatini, Busi Mhlongo, Henry Cele – they all died poor. It’s an all-too-familiar phenomenon in Africa’s arts industry, where talent is entirely at the mercy of the agents, patrons, managers, record labels, galleries and publishers with the foresight to “discover” artists while they’re young and desperate enough work for anything. Artists with insufficient business skills sign up to the first offer on the table because they are starving, and their art is their only tangible commodity.

Charles Sekano was born in Sophiatown in 1945 and dropped out of school before he hit puberty. Sekano says he replaced the three Rs of bantu education – reading, ’riting and ’rithmetic – with the three Ps of his spiritual enlightenment: painting, piano and poetry. Without any formal training in any of the disciplines, he naturally excelled to eminence almost instantly. “I just taught myself how to paint, how to play [the piano]. There was a church we used to break into as kids to experiment on the old piano. There was no one there to teach us, so we taught ourselves … In my painting, I chose the medium of pastel because I couldn’t afford oil or acrylic paint.”

In his late teens, Sekano became a peaceful activist as a member of the Pan Africanist Congress. His father was killed by the police during the forced removals in Sophiatown in 1956. It wasn’t long before Sekano was declared a terrorist, along with countless other members of South Africa’s liberation movements during the struggle, and was exiled to Nairobi in 1967, where he encountered the love and acknowledgment he had longed for since birth. “When I left my country, I left as a non-South African and returned as an African,” he says.

Sekano began performing at Nairobi’s expat jazz clubs during the 60s. It was also there where his first group exhibition was held at the acclaimed Gallery Watutu in 1973, which catapulted him from relative artistic obscurity into international conspicuity.

In 1986, he was selected by the Goethe-Institut to take part in a series of group exhibitions across Western Europe to showcase modern African art. His work was exhibited in Paris, Frankfurt, Nuremburg, Munich, Amsterdam and London. In London, he signed up with the prestigious Maestro Gallery, which, in collaboration with Ed Cross Fine Art, still manages his body of work. He currently has an arrangement with the gallery where he mails them all of his new work in exchange for varying amounts of cash they send him intermittently. He was often described by critics at the time as “Africa’s Picasso”, alluding to his unique tapestry-toned take on Cubism. He paints mostly in pastel, and his subjects, mostly figures and portraits of women, are stitched together with multicoloured rectangles and squares. 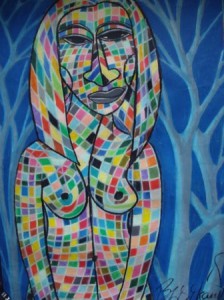 “As black people, we’re forced to experience the world from within the confines of tiny little boxes. From the incubators in which we’re born to the four-room township houses, prison cells, offices, buses and taxis we live in, and ultimately the coffins and graves in which we are buried. We live rectangular lives, so I choose to paint in rectangles. I won’t stop painting this way until the shape of our lives changes.” 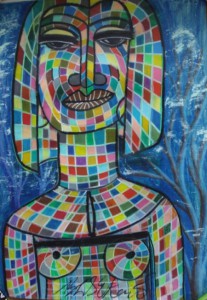 A common misconception South Africans tend to have of exiles is that they had it easy; that they lived opulent lives overseas at the expense of the wealthy foreign donors and patrons who hosted them. Sekano’s experience of exile was very different: “We used to pick stompies from the floor in order to smoke, and we were treated like trophies of charity everywhere we went,” he says.

Exiles were often invited as a PR exercise for their hosts, paraded at dinner parties as evidence of their altruism. But most of the time they lived like paupers, afflicted with debilitating homesickness because at least at home they were never this hungry.

When Sekano eventually returned to South Africa in 1997 after liberation, he was shunned by the new ANC government because he belonged to the PAC. His contributions to South African art history aren’t recognised in the manner of apolitical or ANC-affiliated contemporaries such as George Pemba, Gerard Sekoto and Dumile Feni, which is a serious indictment on our leadership’s politicised approach towards the preservation of history. All parties other than the ANC are excluded from the legend of our liberation.

Sekano lives on the stipend his London manager sporadically sends him, which he supplements with a meagre pension from the state. “He sends me money from time to time – I would say once every six months. It varies – for instance, now he’s sent me R18 000 for my last series of eight paintings, but I’m still waiting for it to clear.” Yet his art still sells on average for between R50 000 and R80 000 per work – significantly more than the amount he receives for an entire series – at Bonhams and other similar traders and auctioneers specialising in modern and contemporary African art. “It’s tough financially. I’m living mostly off the pension, which isn’t enough, but I’m glad I managed to put my children through school with my work. They’re both scientists as they heeded the lessons of their father’s life as an artist,” he quips. He signed with Maestro in the early 80s and was cosigned by them to Ed Cross in 2009. Both Maestro and Ed Cross have declined to divulge the contents of his contracts with them, and Sekano himself is cagey about the subject.

He uses his quaint flat in Berea, Pretoria, as his studio, and it’s littered with paintings to the ceiling. “I paint every day. Even though I’m sick – the doctors say I have an infection – painting is what keeps me alive,” he says. He’s contractually obligated to send all his new works to his manager in exchange for fluctuant amounts of cash that come when they come.

Sekano has performed jazz all over the world. He played with Miles Davis. Yet he doesn’t have access to a piano, only to the booze and violence and insidious noise of Pretoria’s inner-city life. “The last time I had access to a piano was when I was invited by the University of Pretoria to play for a special event. That was more than a year ago.”

Speaking about his neighbourhood, Sekano says, “I try to sit down for a drink at these places, but I can’t take the deafening music of nowadays, and I can’t condone the drugs being sold in these establishments … I get lonely in this house. No one ever visits us, no one ever calls. It’s like I’ve vanished from the earth and I’m the last one to notice.” Sekano’s drinking problem started when he was in Europe. Gin and orange, his chosen elixir, goes down smoother than the hard truths of his daily reality. “I drink every day. It helps me to slow down my thoughts, otherwise my mind is always racing.” He still exudes the radiance of youth, dancing to Miles Davis with his wife, Gloria, until the early hours of the morning. 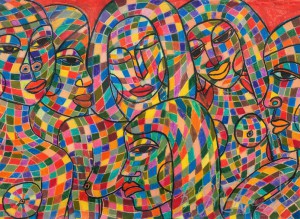 Sekano’s ‘Bridesmaids Of A Wedding’

The typical image of the African artist is that of the town fool, the madman, the drunk, the junkie, the fuck-up, the loser, all of which discourage art as a vocation in black communities. But our artists end up this way because they’re abused by a system designed to squeeze the life out of them, to keep them high and drunk enough to paint, to sing, to create magic for the nourishment of other people’s souls while their sanity is siphoned to the last drop. “My mind is rusted these days. I hardly ever get to exercise it because I get tired of talking, repeating the same things to these people who just laugh it off and say, ‘Tell me that story again, Prof’, as if I’m a radio to switch on and off when they’re bored.”

I found Sekano late last year in a drinking hall in Sunnyside looking out of place, wearing a crimson Che Guevara T-shirt and beaded bracelets on his withered wrists. It was in the early afternoon, but it was as busy as a Friday evening. And blaring through the defunct speakers was loud commercial house music. The tavern was a dungeon of gloomy humidity and filled with the forlorn faces of fallen men. For the regulars, he was just “Old Charlie” or “Prof”, the peculiar old man with the crazy stories. No one recognised him as one of South Africa’s great artists, albeit yet another one with almost nothing of material value to show for it because he’s been sucked dry of his genius by the rampant opportunists and parasites of African beauty.