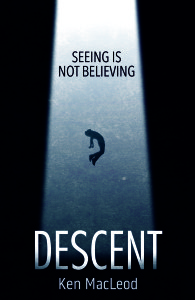 Passive revolutions, posited Italian politician Antonio Gramsci, happen when a governing elite adopts as a technique of statecraft the partial fulfilment of popular demands, transforming them into an essentially conservative project of restoration. That’s the political backdrop to Ken Macleod’s latest book, Descent. The story begins in a near-future Scotland, where state surveillance is ubiquitous (and avoidance of it a reflex), jobs and basic resources are scarce, and street riots are commonplace. Two teenagers, Ryan and Calum, are out where they shouldn’t be when something they assume to be a UFO flattens them into unconsciousness. The real – and imagined – events of that night affect the rest of their lives: relationships, work, and nightmares.

Macleod has described the tale as “bloke lit”, and credits Nick Hornby’s work with helping him solve the structural problem of tying main protagonist Ryan Sinclair’s present situation to the damage inflicted by that past experience. Around the working out of the personal and political issues, he weaves two other themes.

The first is the multiple conspiracy theories of UFOs and alien abduction: are they real and concealed by the government, or is the concealment theory itself government propaganda to deflect public attention from something else? This thread allows Macleod to have a great deal of fun with the little grey aliens we last met in his Engines of Light space opera trilogy, and with schoolboy fantasies about those tight, Courrèges-style female spaceship uniforms. Sinclair’s fantasies, however, stay with him long into adulthood, becoming progressively stranger and stickier along the way.

The second theme explores speciation within the human race, which Macleod links to something he explored imaginatively in his previous book, Intrusion: Scotland’s ancient past. Here, the Neanderthals contribute to a variant strain of humanity, unable to breed outside the now extensive pool of their descendants. That takes the book into some intelligent debates about whether knowing about difference automatically sanctions discrimination against it.

Meanwhile, Scotland’s economy spirals until the ruling elite, decisively and unexpectedly, takes a radical step to reverse the decline: revolution from the top, shorn of ideology, and with power relations almost untouched.

Macleod never suggests this passive revolution is anything more than an effective temporary expedient. Yet there are points where the political backdrop and its impact on lives and work become far more engrossing than the personal dramas being played out before it. Characterisation was never his strongest suite: his characters always stood out in precisely as much relief and detail as the plot demanded, and the ideas, as here, were always intriguing enough for that to carry readers along. (Perhaps his most endearing people were the alien space-bats of Learning the World, who did not even have to pretend to be human.)

In Descent, he has taken on a more challenging than usual task in adopting the viewpoint of a thoroughly unlikeable main protagonist. Sinclair is, in the words of schoolmate Sophie, “devious, shifty, thoughtless, heartless, worthless, obsessive, perverted, voyeuristic” and more.

That does not make the narrative of putative alien abduction, plots and political change any less gripping, at least up to the final chapters. Characters do not need to be sympathetic to engross. They do, however, need to be believable. And while Macleod’s men just about pass, his women are becoming increasingly stereotyped: defined by clothing and other externals, and by their roles in conventional dyads. “Bloke lit” this definitely is, in rather more than structural terms. When Sophie proceeds – almost immediately after uttering her critique – to fall into Ryan’s arms and save him with the love of a good woman, the thin thread by which disbelief is suspended snaps. Macleod is prepared to admit that his protagonist is borderline creepy; most female readers will discern that Sinclair long ago passed Checkpoint Charlie and that any real Sophie would rather run for the alien-infested hills. 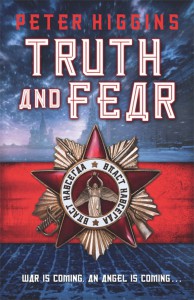 Wolfhound Century, the first volume of Higgins’ series, built a challenging alternative world: a steampunk Stalinist Russia, fuelling its hegemony from the powerful flesh of fallen aliens called the Angels. However, the plot disappointed, stopping abruptly with no resolutions after 302 pages that immersed readers in the investigations – as first enforcer, then outlaw – of Inspector Vissarion Lom.

The sequel, Truth and Fear, amply justifies the decision to stop the opener at that cliffhanger plot point. There are dramatic disjunctures – in setting, mood, plot and content – between the first and second books. The assassination of the dictator, the Novozdh, at the end of the first book, felt almost incidental to Lom’s trajectory. On the run out in the sticks, feeling his way towards a relationship with the enigmatic Maroussia, avenging himself on some of his persecutors, Lom was – and remains, at the start of this book – unaware of the political upheaval. But it sets off a dramatic power struggle in Mirgorod, the capital, and wakens more of the indigenous and invader magic in the land. It is those elements that fuel Truth and Fear.

Wolfhound Century moved slowly and carefully, like the police procedural it partly was. One reason for that was the quantity of backstory needed to inform setting and motivation. But it was all beautifully executed – Higgins employed moving personal narratives rather than infodumps; such meticulous world-building weighed against action and resolution. That vital groundwork laid, book two moves faster; its mood harder,  more like a Cold War spy thriller than a work of detection.

Among new characters, we meet a werewolf, Antoninu Florian. Unlike Twilight’s callow Jacob Black, Florian is the real thing: age-old, world-weary and utterly ruthless, and from his viewpoint, readers see more of the forests, steppes and waterways of the ancient land. In this second book, magic comes to the fore. The visual counterpoint in Wolfhound Century was between the old and magical city of Lezarye and the modern capital of Mirgorod, systematically obliterating its predecessor. In Truth and Fear, it is between the green soul of the land and the brutal, polluting industrialisation that Angel flesh has made possible – and war has intensified.

While the book offers irresistible parallels with incidents of real Soviet environmental hubris – the Aral Sea, the “new cities” of Siberia, Chernobyl – fantasy gives it the power to shape broader metaphors valid for any land exploited to the point of devastation. Yet Higgins’ Russian anchors also hook deep, with graceful literary nods to the urban milieux of Dostoevsky and the ineffectual, nostalgic aristocrats of Chekov. Above all, it is Higgins’ power as a writer – he crafts language wonderfully – that weaves all these references and allusions together into the fabric of a convincingly tough adventure. His characters are never mere devices to serve a plotline or message: they are complex, believable people. Wolfhound Century was an intriguing piece of gorgeously imagined strangeness; add Truth and Fear, and the series has become truly compelling.