President Jacob Zuma’s reading of sections of the Marikana Commission’s report into the circumstances surrounding the death of 44 people in August 16 2012 during a strike at Lonmin’s Marikana platinum mines in the North West province provided no succour for those traumatised by their loved ones’ deaths.

They didn’t even hear it.

At a little before 2pm on June 25, the presidency released a statement that Zuma would be making an announcement on national television at 7pm. Despite numerous unanswered requests for 48-hours notice to prepare their clients by the Socio-Economic Rights Institute (Seri), the lawyers acting for the families of the 34 shot dead by police on August 16, none was forthcoming.

Instead, widows returning from work at Lonmin in the evening were ambushed by the news of the announcement. They, together with the miners injured and arrested by police that fatal day scurried around Marikana looking for a television set or radio to listen to the reading of Farlam’s report.

Eventually, those most affected by the August 16 massacre congregated in a boardroom on Lonmin’s property, but the television feed was not working. Widows sat disconsolate, barely able to hear a live audio streaming of Zuma’s announcement on a small laptop.

“Unfortunately the families cannot comment or do interviews because they still do not know what the recommendations are,” said Kathleen Hardy, an attorney at Seri.

Hardy said it was “unfortunate and disgraceful” that the presidency had not considered Seri’s request. This would have allowed time for preparations to be made for the families to hear the announcement together in a supportive environment.

Zuma and his government have been criticised for their callous approach to the families of those killed by police since the massacre almost three years ago. Family members have over the past three years complained to the Mail & Guardian of being treated as “criminals, or the families of criminals” by government as it adopted a denialist approach for any responsibility for the August 16 deaths.

According to the sections read out by Zuma, the report found that South Africa’s deputy president, Cyril Ramaphosa, who was a non-executive director of Lonmin in 2012 was not “the cause of the massacre” as alleged by the lawyers for the miners arrested and injured on August 16. Emails between Ramaphosa and Lonmin executives submitted to the commission showed that he had asked former police minister Nathi Mthethwa to pursue “con-commitant action” against the miners after 10 strike-related deaths in the week preceding the massacre.

The report also absolved Mthethwa, former mineral resources minister Susan Shabangu, and the rest of the executive from any responsibility for the August 16 massacre.

Farlam made no findings against national police commissioner General Riah Phiyega but recommended that her conduct be investigated. The buck looks set to stop with North West provincial commissioner, the now retired Lieutenant-General Zukiswa Mbombo, who, the commission found, “took the decision to implement the plan” which was endorsed during an extraordinary sitting of the police’s National Management Forum on the night of August 15.

The report raised “serious concerns” about medical assistance only arriving an hour after miners were shot dead at scene one and found that the police’s tactical operation should have been stopped after the seventeen deaths there.

Instead, police continued to “scene two” where they killed a further 17 miners who, forensic evidence suggested, were killed execution-style.

Zuma did not mention “scene two” in his abridged reading of the report.

The report also recommended that an investigation be conducted into Lonmin not fulfilling its social and labour plan obligations to build 5 500 houses between 2005 and 2011. Fulfilling these obligations are integral to Lonmin retaining their platinum group metal mining rights in South Africa and Lonmin, in that time only managed to build three show houses for their employees.

A lack of proper housing for employees—a 2010 Lonmin report found that 50% of the population living in a 15km radius of its operations lived in shacks—was considered a motivating factor behind the strike.

The rest of Marikana was also in darkness about the report—miners said the town was load-shedded during Zuma’s announcement.

All Images by Paul Botes 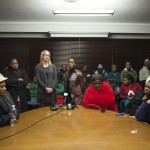 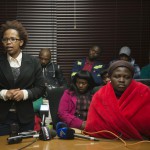 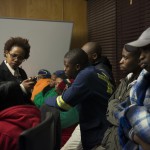 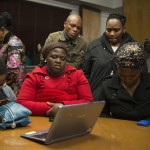 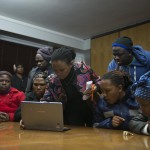 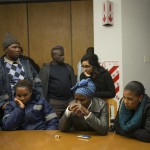 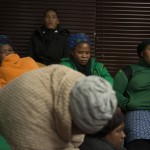 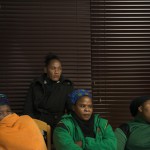