Let’s look at a series of maps of Gauteng, down to the voting district (VD) level, to show the Economic Freedom Fighters’ (EFF) success in the 2014 elections. Support for the party is clustered and lumpy, as with most other parties.

Based on the 2014 results, the EFF might hope to win a handful of wards in Gauteng in the 2016 municipal elections, all in the Ekurhuleni metro. We can examine the implications for municipal councils post-election in the three metros (Johannesburg, Tshwane and Ekurhuleni).

The voting patterns also raise questions about the composition of the EFF’s support in Gauteng, which is highly correlated with Sepedi and Setswana first-language speakers, and with migrants from Limpopo. Is support for the party restricted by language and ethnic identity? Can it become more broad based in time for the 2016 elections?

For the EFF to look like a serious contender in any particular ward, it needs to have captured at least 35% of the vote in a majority of VDs in the ward. Most wards are made up of five to 10 VDs, so the results of a single VD might not be reflective of the ward. We’ll consider VDs where the party won at least 20% of the vote to look for general patterns, even though most of these areas aren’t potential wins for the party.

There are a few terms and conditions. The analysis uses the 2014 election results and the municipal, ward and VD boundaries in place in 2014. There will be new boundaries for the 2016 municipal elections – as close to a shifting of the goalposts that you’re likely to see. This complicates the analysis a bit.

How did the EFF do in Gauteng in the 2014 elections?

The EFF took 10.3% of the vote in Gauteng in last year’s elections, which was pretty good for a first-time effort. The party holds eight of the 73 seats in the provincial legislature.

There were 2 647 VDs in the province in 2011. The table below looks at the distribution of the EFF vote across those VDs:

Click on each graphic to see it in larger size 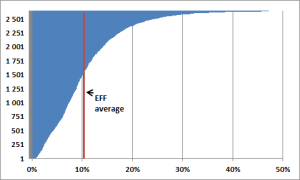 Distribution of the EFF vote across Gauteng VDs

The EFF won 30% or more of the vote in only 54 VDs (2% of all VDs) and it won 40% or more of vote in just 10 VDs (which is less than 0.5% of the total). But these last few VDs are clustered tightly. The commander in chief himself might say that “these are revolutionary suburbs and townships”.

Take a quick look at the first map of the province, colour coded for EFF support from yellow to red. 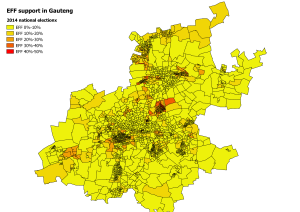 It’s hard to pinpoint VDs of interest for two reasons. Firstly, some areas of the province have VDs so small that, on the map, they’re just a smudge of black lines. Secondly, it’s difficult to differentiate between the yellow, mustard and orange shades.

Remove from the map the VDs with lower levels of support and the more EFF-friendly VDs are highlighted – a bit like lowering the lights at the planetarium to reveal the individual stars. Here’s a map of the VDs that gave the EFF more than 10% of the vote: 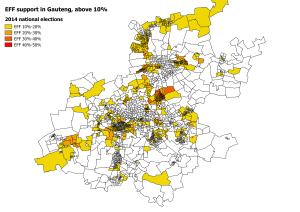 And here are the VDs that gave more than 20% of the vote to the EFF in 2014. The three metros have been added to the background: 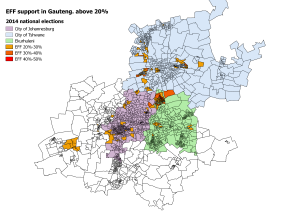 The EFF in Johannesburg and the West Rand

The map below is of the Johannesburg metro and some areas of interest in the West Rand district: 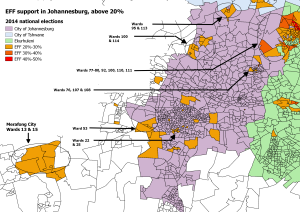 There’s a pocket of support in Merafong City, the westernmost municipality in Gauteng. This area of support is to the southeast of Carletonville and covers West Driefontein, East Driefontein and East Village. Wards 13 and 15 in Merafong City are where the party did best in the municipality – but it still only won 24% and 19 % of the vote respectively.

In the Johannesburg metro, in the south there are two wards in which the EFF has a sizeable minority: wards 53 (the south end, around the Taunus substation) and 22 (Pimville, Soweto). The party has about 15% in each. The EFF also won 12% of the vote in Ward 25 (Klipspruit, Soweto).

The northeast side of the metro, particularly the bit bordering Ekurhuleni, is the area with the most promise. In Alexandra, there are a few wards where the EFF has around 20% of the vote, namely wards 76, 107 and 108 (with 20%, 21% and 19% of the vote respectively).

There are also two wards where the EFF might think it has a slim chance of winning next year. Ward 111 saw the EFF win 27% of the vote in 2014, while the party won 31% of Ward 80 in the same elections.

Both of these wards have a large proportion of Sepedi-speaking South Africans who are originally from Limpopo.

Unless there’s a big change in the voting patterns in 2016, the EFF can’t hope to win many wards in Johannesburg. Its best chances are in wards 80 and 111. The party has a much better chance of winning seats in the Ekurhuleni metro.

The EFF in Ekurhuleni

Ekurhuleni is the best shot the EFF has at winning wards in the 2016 elections.

The party’s support is concentrated in the northern half of the metro, although there are two smaller, weaker pockets of support further south: 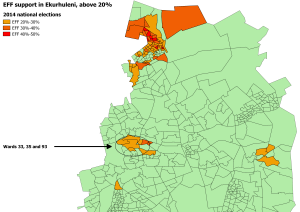 The first of the smaller areas, to the west, covers some of the wards in the south and east of Germiston. These include industrial land and the farm of Driefontein. Wards 33, 35 and 93 have 18%, 15% and 19% of the vote respectively. Ward 33 contains the Kanana and Chris Hani informal settlements – which cover three VDs where the EFF won more than 30% in 2014.

The second area, in the east, comprises the suburbs east and north of Springs. The party doesn’t have very strong support in any of the wards.

The northwest corner of the metro is where the action is. The map below zooms in on the area and includes the current (2011) ward demarcations. Bear in mind that these ward boundaries are being realigned by the Municipal Demarcation Board in time for the 2016 elections: 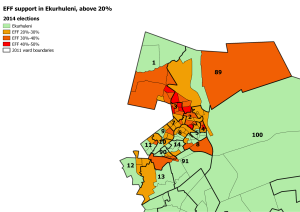 These wards contain all the VDs where the EFF won more than 40% of the vote, and they’re all in Tembisa. The percentage of the population that is Limpopo-born, Sepedi-speaking is also above 40% in these wards. The wards are also under consideration for redemarcation.

The EFF in Tshwane

In the capital city of Tshwane there are pockets of EFF support dotted around the metro, just like in Johannesburg – and, just like Johannesburg, there aren’t any easy ward victories for the party.

The map below shows the western part of the metro, with wards of interest. There isn’t significant support for the EFF in the northern and eastern parts of Tshwane. (Remember that the larger, eastern half of the metro is made up of the former Metsweding district, which is probably the most rural/agricultural part of Gauteng. The wards are large because of the low population density.) 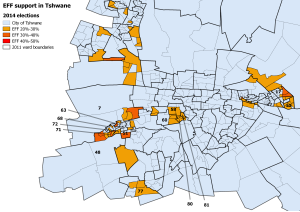 The EFF’s chances in Tshwane aren’t as good as in Ekurhuleni, but the capital city shows that the party’s support isn’t just drawn from Limpopo-born Sepedi-speaking people. In the west of the metro in particular, the party enjoys support from Gauteng-born Sepedi and Setswana speakers.

The EFF in Gauteng municipal councils after 2016

The party will definitely win seats across the province, but these are likely to be proportional representation (PR) seats and not ward seats. The EFF’s overall level of support should see it win about 10% of seats in all three metros, which translates to between 20 and 30 seats per metro.

The party’s best chance at winning ward seats is in the Ekurhuleni metro, where it has a decent shot at up to five wards. But a lot depends on the new ward demarcations.

All calculations assume the party’s support is little changed from the 2014 results, and that general voting patterns are also unchanged. Both assumptions may be unrealistic.

On the downside, the party is facing a number of internal divisions and challenges, and Julius Malema is entangled in his own personal tax problems with SARS.

The party has contested only one or two wards in by-elections since last year’s general elections, and there isn’t much primary data to indicate how the party will fare in municipal general elections. In the most recent by-elections, the EFF won a PR seat in the KwaZulu-Natal municipality of Mtubatuba, but the party received only 1.5% of the vote.

The analysis so far has concentrated only on EFF results in Gauteng, and the province’s demographics are quite different to neighbouring provinces (more urban, more people in formal housing, etc).

In the three metros, the EFF’s support is largely found in informal urban areas, in the newer, less-formal parts of established townships, and in informal settlements. First-language Sepedi and Setswana speakers are the two largest demographics supporting the party. In most areas, these supporters are recent migrants to the province, with many of them originally coming from Limpopo. In Tshwane, however, there are pockets of support from Gauteng-born voters.

The high correlation of support with home languages and other provinces of origin is something that should be treated with sensitivity, particularly in light of the current violence against foreign black Africans in Durban and Johannesburg. The politics of ethnic and racial identity is an emotive subject.

The only hard data available for the EFF’s electoral success is the 2014 results. This doesn’t mean the party can’t grow its support base and appeal to a wider demographic, but it does suggest the party’s growth is neither inevitable nor easy.

The ANC’s share of the vote may fall below 50% in any or all Gauteng metros next year, which doesn’t automatically mean it will lose control of any councils. The most obvious coalition of opposition parties (assuming a coalition of the opposition is possible) would include the DA and EFF, because there is no other route to a majority coalition in Gauteng.

Municipal elections are still a year away, but it would be surprising if the two parties aren’t already talking about possible horse trading and strategy for the province. The new redemarcations will also be interesting to analyse once they are finalised as there are a number of wards where the DA and EFF are splitting the opposition vote, and a redemarcation of some of these wards might give both parties a chance to win new council seats.

The EFF’s success in Ekurhuleni might not be enough to whittle away the ANC’s majority in the metro, as the Lesedi local municipality will be subsumed into the metro after 2016, and the ANC has a 70% majority in Lesedi.

Pic Credit: Julius Malema on the campaign trail in the 2014 National elections by Jono Wood

This article is an edit of a number of blog posts originally posted on http://paulberkowitz.co.za

All graphs and maps by Paul Berkowitz

Paul Berkowitz is an economist by training but he also writes, educates and sings in the shower. In theory, he'll write about anything that interests him. In practice, he tends to write about municipal elections, macroeconomic trends and Test cricket. He prefers to be paid/bribed with chocolate because, seriously, have you seen the state of the rand lately? View all posts by Paul Berkowitz →