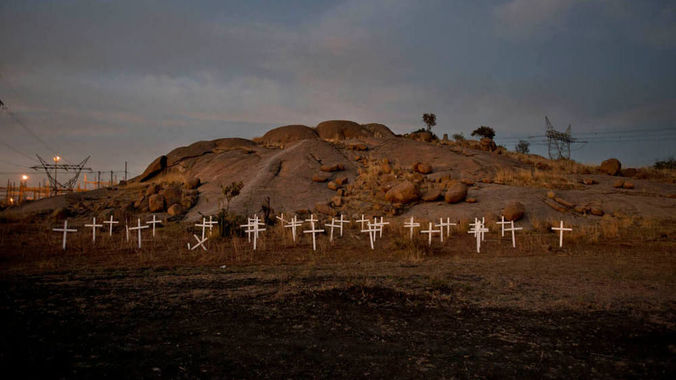 The lengths the South African Police Service (SAPS) went to mislead the Farlam Commission of Inquiry made plain the cover-up that followed their shooting 34 miners dead on August 16 2012, according to the Marikana report released last week.

Commission chairperson, retired judge Ian Farlam’s report suggested a rot at the very top of South Africa’s law and order establishment. And a “prima facie” case that both national police commissioner, General Riah Phiyega, and North West provincial commissioner, Lieutenant General Zukiswa Mbombo, approved a series of lies be submitted to the commission as the “truthful” version of events at Marikana during the protected strike that left 44 people dead.

“The leadership of the police, on the highest level, appears to have taken the decision not to give the true version of how it came about that the ‘tactical option’ was implemented on the afternoon of August 16 and to conceal the fact that the plan to be implemented was hastily put together without public order policing inputs or evaluation,” Farlam’s report noted.

These, and other misrepresentations, were contained in “Exhibit L”, the police’s version of events, which was concocted during a retreat to the Roots hotel in Potchefstroom 11 days after the massacre – the document was largely discredited during the commission’s hearings.

For over a year of the commission’s sitting, the SAPS contended that they had only decided to “go tactical” – a decision that left 34 striking miners dead – on August 16 following an escalation in tensions at Marikana. This, they submitted, was based on various threats issued by striking miners against them.

Commission evidence leader Matthew Chaskalson SC had argued that the only contemporaneous evidence of threats made against police on August 16 was an 11.20am situational report entry in the joint operational co-ordinating committee occurrence book.  The entry described the police Nyala “Papa One” reporting that a group of strikers had approached them and the “group leader asked the police official to remove their [barbed-] wires and he said that he is not going to ask them again as he’s also aggressive [sic]”.

This, according to Chaskalson in his cross-examination of Lieutenant Colonel Duncan Scott, who was responsible for drawing up the tactical plan – deemed deficient by the commission – was to the best of the evidence leaders’ knowledge, the “sum total” of threats made against police.

An extraordinary sitting of the NMF
However, following a tip-off to the evidence leaders, it emerged that the decision to encircle, disperse and disarm the miners on August 16 was actually taken the previous night during an extraordinary sitting of the police’s National Management Forum (NMF), which included provincial police commissioners and then crime intelligence divisional boss Richard Mdluli.

The commission had unsuccessfully attempted to access the minutes of the meeting from SAPS, with the police stating that the recording and transcript had gone missing. Farlam had sent a list of questions to the provincial commissioners present, including whether the possibility of bloodshed during the operation was adequately ventilated at the forum.

In his report, he agreed with evidence leader Geoff Budlender’s opinion that the answers received from the provincial police chiefs were a “disgrace” for being so slim. It was a damning criticism of the lack of transparency running through the police hierarchy at national level.

Neither Mbombo nor Phiyega were able to remember significant detail from the hour-long discussion with the latter, telling the commission after she was recalled to the stand that she was not able to remember and “give those pedantic details”.

Farlam noted in his report that several police members lower down the chain perjured themselves in aligning their testimonies with the official police version. Mbombo’s phone records, for example, indicated that she had called her three most senior officers at Marikana, major generals Charl Annandale, William Mpembe and Ganasen Naidoo, immediately after the NMF meeting on August 15.  All three denied her relaying the decision to forcibly remove strikers the following day to them during those calls – something the commission found to believe, agreeing with the evidence leader’s appraisal that it was “inconceivable”.

They argued that it was “more likely to be the legacy of what seems to have been a co-ordinated original attempt by SAPS not to disclose that the decision to disarm the strikers” had been made at the extraordinary sitting of the NMF.

SAPS behaviour at commission
During the two years of the commission’s sitting counsel for the South African Human Rights Commission, advocate Michelle Le Roux, had described the police’s approach to truth-telling at the commission as a “blue wall of silence”.

This extended to various aspects of the SAPS behaviour at the commission. Le Roux noted in the human rights commission’s final heads of argument that during February 2013 and September 2014, her team had made numerous, repeated, requests for documents with police responding that they did not exist or could not be located.

Frustratingly, at least 13 requests had to be repeated on average four times each. When commitments were made to make documents available, the SAPS “still failed to do so and often did not disclose the information in full” the human rights commission said.

This obstructive, noncooperative approach by SAPS was evident, for example, when the Legal Resources Centre asked to inspect the computer hard drives used by police during the Marikana operation. After a “lengthy interaction” Major General William Mpembe, in a sworn affidavit, said that “from [August] 13th to the 16th, there was no computer available for the use of the Joint Operations Command personnel”.

Mpembe conceded under cross-examination when presented with photographic evidence of computers in the Joint Operations Command (JOC), that his statement was patently false. He then backtracked, saying he meant there were no computers linked to the SAPS mainframe available to police at the JOC. Le Roux argued that this was disingenuous and that his “false statement” nevertheless had the “effect of thwarting a legitimate inquiry from the representatives of the Ledingwane family”. Papi Ledingwane was killed at scene one.

Lies and obstructionism characterised the police’s approach to evidence disclosure at the commission. Rather than taking paramedics to assist the injured at scene one, Major General Naidoo had formed a posse of K9 Unit and National Intervention Unit police members to sweep scene two, or the “killing koppie”.

Farlam found that nine of the 17 miners shot dead at scene two may have been killed by this gung ho group. Naidoo himself had fired off shots. Yet, tasked with gathering of and handing in of all guns fired on August 16 for ballistic testing, the major general omitted to send his own side-arm in.

Police also did not make available to the commission a reconstruction of scene two by their expert, Cees de Rover, in which he asked police members present on August 16 to place themselves in the positions they occupied on the day at the time of their firing their weapons, and to confirm the correct positioning of colleagues to their left and right.

“Regrettably, the commission is not privy to the workings and details of the reconstruction and has not been furnished with any documentation or diagrams to show the process followed in arriving at these conclusions,” Farlam wrote.

De Rover, upon realisation during testimony at the commission, that he had not been fully briefed by the police members and leadership about the full extent of their knowledge of, and participation in, the August 16 operation, “turned” in a remarkable day’s hearing last year. When a single police officer, such as air wing commander Colonel Salmon Vermaak, did break the “blue wall of silence” with criticism of the August 16 operation, there were attempts to discredit him.

Brigadier Adriaan Calitz, the operational commander at Marikana had tried to pin the 17 deaths at scene one on Vermaak, by telling the commission he had handed over command and control of the operation to him. Vermaak testified that Calitz had called him at around 3.30pm on January 9 2014, the tea break during the latter’s testimony, and told him that their testimonies to the commission should avoid contradiction.

Drawing on notes that he had kept in his diary, Vermaak told the commission that during the call Calitz had told him that “I [Vermaak] had taken over control of koppie three [scene two] according to him.”

Evidence leader Kameshni Naidoo, who was cross-examining Vermaak at the time, noted that Calitz’s testimony before the tea break had increasingly suggested that he had delegated overall operational command of police forces to Vermaak. Vermaak had denied this and said he was “only playing a supporting role to the operational commander” while “only” implementing the encirclement plan. Vermaak told the commission that he was “hugely disappointed” by Calitz’s proposition, which sought to make him a scapegoat for the killings at scene two.

Farlam recommended inquiries into the fitness to hold office be instituted against Phiyega and the now retired Mbombo, but the rot at police headquarters appears to run much deeper, according to the evidence before the Farlam Commission.