With the opening weekend of the National Arts Festival’s Jazz programme complete, a number of home truths have been made patently clear already. Firstly, the national arts festival offers a far superior listening experience when compared to its richer cousins, the Cape Town International Jazz Festival and the Standard Bank Joy of Jazz. Secondly the future of South African jazz is in secure hands if performances by Vuma Levin, Nduduzo Makhathini and Benjamin Jephta are anything to go by. Lastly, while it was great to see Thandi Ntuli and Siya Makuzeni leading their own bands on Friday and Sunday respectively, the South African jazz scene is still very much a testosterone driven, chin-stroking landscape and a lot more needs to be done to bring South Africa’s female jazz voices to the fore. 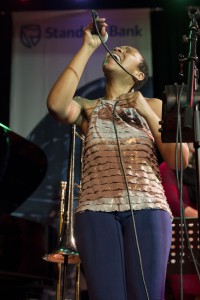 Makuzeni’s set on Sunday night was one of the festival’s highlights, a warm intimate evening of jazz that featured compositions from Andile Yenana, Marcus Wyatt, Zim Ngqawana, Johnny Dyani and Chris McGregor. Makuzeni began playing the trombone in 1997 while attending Stirling High School in East London and went on to study jazz at Rhodes University & the Pretoria Technikon Music School. Makuzeni was a regular attendee at the National Youth Jazz Festival and performed with the National School’s Big Band, the National Youth Big Band and the National Youth Jazz Band. She has since branched out exploring her voice within jazz and outside of the parameters of jazz, performing and collaborating with Marcus Wyatt, Themba Mkhize, McCoy Mrubata, Feya Faku, Zim Ngqawana, Sibongile Khumalo, and many more. She is also the bandleader of her own rock band, Ippyfuze, while the album, Maji Maji in the Land of Milk and Honey, released last year with Marcus Wyatt under the Language 12 moniker was a highlight in a stellar year for jazz recordings. 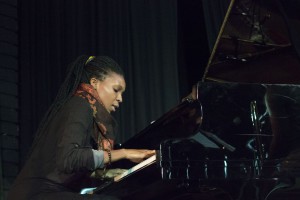 Featured in Makuzeni’s band on Sunday night were young South African pianist Thandi Ntuli and bassist Romy Brauteseth. Joining the two women in the rhythm section was outstanding drummer Ayanda Sikade. Joining Makuzeni in the horn section were South African trumpeter Sakhile Simani and Swiss saxophonist Donat Fisch. Dressed in a gold-sequined sleeveless top, with blue tights and back boots, Makuzeni used various digital manipulation techniques to contort her voice into all kinds of shapes, as the band followed her lead. Rock, jazz, gospel, hip-hop, soul and even drum and bass coalesced, often within the same piece, as the band gave life to Makuzeni’s visions. The highlight however was a performance of the Marcus Wyatt tune Jessica from his album Gathering, where Makuzeni’s voice became a husky hazy dream as she poured everything she had into the gentle ballad.

As great as the show was, one had to wonder why it had taken the festival so long to give Makuzeni an opportunity to lead her own band. In the meantime many young male jazz musicians have been given these opportunities. As a colleague pointed out, Benjamin Jephta is just twenty-two and he is leading his own band at the 2015 festival. Not to take anything away from Jephta, his set was another festival highlight. But the question has to be asked, are their double standards at play here? As my colleague said, the festival organisers need to do some hard thinking. 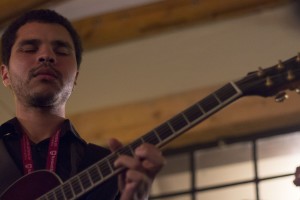 Other highlights of the first weekend included Vuma Levin, Benjamin Jephta and Nduduzo Makhathini. South African guitarist Vuma Levin wowed audiences on Thursday and Sunday night with his quintet presenting compositions from his debut album The Spectacle of An-Other. Levin is currently completing his Masters at the Amsterdam Conservatory and his quintet is made up of a number of his classmates. Spaniard Xavi Torres Vinente on the fender rhodes was particularly impressive as was British saxophonist Bernard Rossum. The arrangements of Levin’s compositions were intricate and thoughtful and the performances spirited.

On Sunday night Jephta led a band featuring Kyle Shepherd (piano), Marcus Wyatt (trumpet), Sisonke Xonti (saxophone) and Sphelelo Mazibuko (drums) in performing music from his debut album Homecoming, released earlier this year. They performed One for the Plein, Hymn for Ada and Requiem for the Wandering, as well as two newer compositions, one of which was inspired by watching legendary South African bassist Carlo Mombelli perform. The musical conversation between Shepherd, Jephta and Mazibuko was worth the ticket price alone. Shepherd, looking like a young version of Prince with his hair hanging down over a black and red checked shirt, was exceptional on keys. 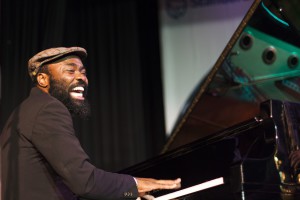 On Friday night, Standard Bank Young Artists for Jazz in 2015, Nduduzo Makhathini launched his new double album Listening to the Ground. His band featured Swedish saxophonist Karl-Martin Almqvist and bassist Martin Sjostedt, as well as South Africans Nomagugu Makhathini (vocals), Feya Faku (trumpet) and Ayanda Sikade (drums). While Makhathini told the crowd that it was great to play live with such jazz veterans, as they made him feel safe, it was in fact the young pianist who stole the show with his fancy finger work. At one point he was playing so fast, it was as if the keys were rising from the piano to meet his fingers half way, the whole time his joyous smile beaming at his fellow musicians. Sikade and Makhathini had eye contact almost the entire gig as they urged each other on. Their relationship goes back years to when they used to play together in Zim Ngqawana’s quartet. The show closed with two numbers from Listening to the Ground, titled From an Old Bag of Umkhumbane and Same Mother, on which Feya Faku stole the show with some spirited blues-infused soloing. His trumpet and flugelhorn were the perfect counterpoint to Almqvist’s lush saxophone playing.

First Pic: Siya Makuzeni belting it out by CuePix/Tamani Chithambo