Graffiti art is, perhaps, one of the few professions that allows its practitioners the room to traverse separate geographies and make a mockery of the town planner’s divisive hand. It may be because of its ancestry and DNA, at once secret and public, borderline illegal and somewhat official,  anti-establishment and co-opted.

Which would explain why Cale Waddacor, the photographer/ artists behind the book Graffiti South Africa was joined on stage by Iain “Ewok” Robinson and Sven Christian in a ThinkFest! discussion, “The Role of Public Art in Urban Spaces” at the National Arts Festival in Grahamstown on Sunday.

Graffiti artists are not the menace and bureaucratic nightmare they were in decades past, they are now part of the establishment, courted by the local authorities, the big corporates and galleries (Exit Through The Gift Shop , a documentary by Thierry Guetta, is a fascinating take on how this happened).

Ewok, flanked by Waddacor and Christian, dominated the conversation with intelligent commentary on his art, how far graffiti artsits have travelled and that journey’s particular pitfalls.

He reminisced, for instance, how it was people in poor, heavily polluted neighbourhoods in Durban’s south basin area were the first to give them walls to paint.

“The people were happy to give us walls,” said Ewok. “Now that graffiti has become cool we have not been out there in years. I feel shitty about it. Now I would rather go and paint a wall that’s around the corner than drive 15 minutes away to the south basin,” said the Durban artist.

He asked the obvious question that, in a medium that is hugely popular among the black population, why this discussion didn’t include a panelist with healthy doses of melanin.

The discussion was weighted with the notion of the public and public spaces: parks and park benches, overpasses (used by the poor as homes) and taxi ranks.

One of the most fascinating interventions of the night was, perhaps naturally, from an architecture student who asked why in South Africa public spaces are the spaces peopled by the poor and what that would suggest about graffiti artists – in the main middle-class and white males – potential imposition of their privilege in a “public space” already appropriated: “The realm of the public has been the realm of the less privileged.”

A poignant point whenever higher walls are go up and booms are erected without any murmur from city fathers (and mothers), and why ever more exclusive housing estates have become de rigeur.

All Photos courtesy of Cale Waddacor, click on an image to see them in gallery form 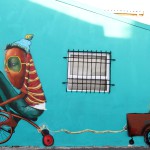 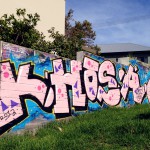 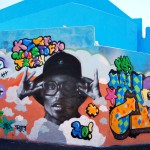 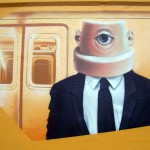 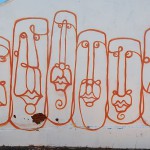 2014 Ways of Being Here, Real Politik