Vuma Levin is an artist who finds himself simultaneously at the end of history, and in the middle of it. Amsterdam and Joburg serve as the respective locations of these two historical positions – Amsterdam at the end, and Joburg in the middle. The Spectacle of an Other, Levin’s debut album, is a musical exploration of this curious dual position.

The artist was raised among the sights and sounds of a hardly post-apartheid Joburg, but has spent the past five years studying and creating music in Amsterdam. Northern European countries such as the Netherlands consider themselves a part of the “developed” world. Unlike the present-continuous “developing”, “developed” signifies something that is complete, done. The developed is the mature or the adult. The adult world is one that has reached its teleological end, and that end seems to be liberal democracy. The struggle is over, ideology is settled, and consumerism is the life jacket that keeps society afloat as it rides the wave of the spoils of its violent past. In a cultural landscape padded to the teeth in post-postmodernist irony, the artist needs to go inwards, to impossible depths and at great psycho-emotional risk, to find a shred of single-entendre sincerity.

Joburg, on the other hand, belongs to the “developing” world right in the middle of history, where every cultural symbol burns with highly politicised outward meaning. There is no consensus of who is human, how we should live or where we are going. The smallest artistic gesture is alive and restless with social significance.

The musical experience of being divided between these two worlds is illustrated in The Spectacle of an Other, predominantly in the way they bleed and blur into each other. Amorous harmonic progressions, the sound of the bow on the double bass and electric swells on the guitar draw up images of the individual, of self-preoccupation, and of existential angst à la Portishead or early Radiohead, but these images are interrupted by a subtle, unpretentious thread of homage and community that runs through most of the compositions. Tribute is paid to the masters and the stories from back home. Feya Faku, Afrika Mkhize, Bheki Mseleku and Abdullah Ibrahim – to name just a few – are all acknowledged through subtle intimations that upset the possibility of a solipsistic inward dive. 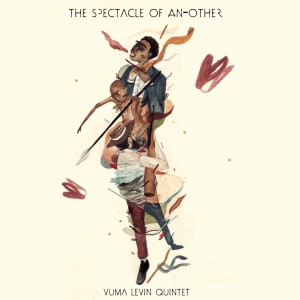 With this album, Levin establishes himself not only as a young jazz guitarist to be noticed, but as an exceptional composer, arranger and artist. The explosive musicality of Levin’s band is guided by his invisible hand into the contours of a multifaceted narrative about celebration, war, love, loss and identity. The album is beautiful and satisfying to listen to, without ever being gluttonous. Compositions sound like they were carefully, thoughtfully sculpted over time. Restraint, discipline and patience are palpable ingredients in the work that make possible the sincerity in the tenderness, the believability in the drama, and the catharsis in the rare moments of climatic indulgence. They are the difference between a truly compelling story and a collection of good ideas stitched together in the name of “hipness”.

The massive success of Levin the composer and arranger does, however, run the risk of eclipsing the rare and refined talent that is Levin the guitarist. The few extended guitar solos on the album are so well structured within themselves, and so well integrated with the bigger ideas of the compositions in which they feature, that it is easy to overlook their brilliance. Levin’s facility on the instrument, his creativity and harmonic range as an improviser, as well as his warm but clear tone, all set him apart as a guitarist on the South African jazz landscape – a guitarist whom, on this album, I would have liked to hear more of.

The guitar is an odd character on the peripheries of the South African jazz discography, and it is an unconventional choice for a young and relentlessly ambitious South African jazz musician. Despite the instrument’s relatively insipid presence in local jazz, the jazz guitar makes a lot of sense in Levin’s hands. Within his accent on the instrument lie traces of not only his discipline and perfectionism, but also of some of his more unexpected musical influences. The mark that albums like Radiohead’s Hail to the Thief and Coldplay’s Parachutes have left on Levin’s musical aesthetic is made evident in his sparse use of electronic effects to float around the margins of the lush, deceptive harmonies made popular by British rock bands when he was a teenager in the suburbs of Joburg. This influence is most obvious around the middle of the album, where there is a heartbreakingly sweet, then progressively darker account of letting go. In After Her, Levin the romantic is betrayed by his telling of the oldest story in the world.

Levin’s vocabulary as an improviser often lends a surreal sense of optimism to what is generally rather dark subject matter. A contemporary vocabulary of wide triadic movement superimposed on a blueprint of traditional running 8th bebop lines lends Levin’s music a feel that is at once open and forward moving. This is demonstrated best in The Lingering Past Empowered, where guitar and tenor saxophone snake through each other in unison, each harmony countering the other, and culminate in conversation on top of the slowly building rhythmic tidal wave of drums, bass and piano.

From the album art (by Lisolomzi Pikoli, aka Mr Fuzzy Slipperz) to the song titles and the liner notes, it’s clear that this album is unapologetically political. Themes of history and identity are explored in what Professor Lewis Gordon calls (in the liner notes) the “original language of affect and motion”. Without the violence of words, the music is able to stride unscathed through the vicious intersection of politics and morality.

A few weeks back, during the first gig of his quintet’s South African tour at Afrikan Freedom Station in Westdene, Joburg, Levin told the audience how one of his teachers at the conservatory where he studies asked him to “bring where he comes from into his music”. He jokingly said that he is pretty sure his Dutch teacher was hinting that he should “start sporting a dashiki and hitting a big drum”. The audience was amused by the story, but their jokes about Levin in a dashiki could hardly mask the sinister point behind the joke – the injustice of the way in which African music is regarded by the Western gaze. The caricature of the African musician is perhaps a symptom of the unconfronted past lingering in Europe’s streets and universities alike. In Amsterdam, for example, there are constant reminders of Europe’s colonial heyday of unprecedented growth and slavery. The black face of poverty, the black face of deviance, the black face of menial labour, and of course, the blackface of Zwarte Piet all reinforce the two-dimensional space occupied by the spectacle of the African “other” in the European imagination.

As the caricature spills over into cultural symbols, African music is lobotomised by its essentialisation. Since it has to serve as the binary against which Western intelligence, order and sanity can be defined, African music is granted excitement but not discipline; energy is allowed, but not intelligence.  The Spectacle of an Other is an attempt to disrupt the fetishisation of African identity in art by adding nuance, contradiction and a choir of voices – past and present- to the one-sided African story.

Levin, with his band (comprising Bernard van Rossum, Xavi Torres, Marco Zenini and Jeroen Batterink), Gordon and Pikoli have produced an exceptional cultural document – romantic, political, exciting, gentle and cerebral. In just eight tracks, The Spectacle of an Other manages simultaneously to find post-ironic sincerity in the world at the end of history, embrace the life-or-death politics of the world at the middle of history, and mediate the communication between the two worlds in a language that equalises their terms of communication. This album stands out, not only by virtue of the technical triumphs in everything from musicianship to the recording quality, but also because of the nuance and poignancy of its message elegantly delivered in a hybrid aesthetic of head and heart thinking as one.

Gerrit Strydom is a musician, student and teacher based in Johannesburg who likes to write; mostly about music or fiction View all posts by Gerrit Strydom →