Frank is just another writer. You know the type: mildly talented, satchel overflowing with literary gold

by authors he hopes to emulate one day and a penchant for beer. He can be found at a bar near you moaning about everything from the economy and xenophobia to women.

And between the pages of Perfect Hlongwane’s debut novel Jozi, this particular Frank, because that is his name, comes alive, as does the inner city that is home to him and a mixed bag of characters known as his friends.

The novel’s tone is set in the very first paragraph, when Frank introduces us to the city and how he knows it: “Jozi, the Johannesburg we know, of the inner city – Braamfontein, Joubert Park, Hillbrow, Berea, Yeoville – is a heartless place. It is the monster that swallows people whole. A place that chews them up and spits them out like lifeless mince. An unforgiving fire turning bones into ash; a furnace whose flames lick hungrily at the particles of humanity as they dance, lost, in the wind. I remember once, in 1991, hearing Jozi described by a newly arrived jobseeker as ‘the city of dreams’. To this day the description rings true, for the Jozi I have come to know is a place where dreams come to die.” 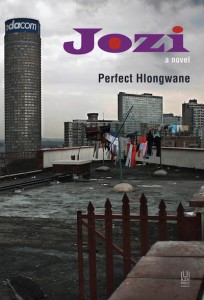 Frank is a flâneur who experiences the city at street level with his friends. So if he is in a fancy car, it probably belongs to his friend Comrade. But his other friends, like the poet, will have to make it to the whorehouse on the Hillbrow-Berea border on foot, and they do.

Later, we find ourselves with Frank in a minibus taxi to Yeoville. He boards at the T-junction on Eloff Street overlooking the Park Station complex. Here we meet a woman named Matilda and her five-year-old son Thapelo. Matilda is arguing with a taxi marshal for refusing to let Thapelo ride for free. In the end, the little boy is placed on Frank’s lap and the journey commences. If you’ve ever been in one of these taxis, you’ve probably sat next to a woman like Matilda, or worse, someone who makes you hold their groceries.

But more about Frank’s friends. Comrade allegedly went into exile, but it’s uncertain whether this is true. Then there’s the womanising Senzo; and Duma, who is having relationship problems with his girlfriend Buhle.

They hang out on the rooftop at Tandoor in Yeoville, at House of Ntsako in Brixton or in dingy bars around Hillbrow and Braamfontein. Danger from the city’s incessant crime is never far off, but neither are mischief and chance encounters.

On one occasion, Senzo and Frank find themselves at a drinking spot in Newtown with a Danish journalist who seems to be concerned about South Africans and their tendencies towards heavy drinking and risky behaviour. Here Senzo, who will later go on to have a six-week relationship with the Dane, explains: “It’s true, we drink like there’s no tomorrow. No, let me correct that, we drink to erase tomorrow. There is a mass impulse toward suicide in this city that operates, most of the time, at low intensity. It appears in the guise of alcoholism, risky sex, sudden violence, road rage and daring acts of crime. This kind of behavior is just the early ghost of self-destruction.”

The novel follows in the footsteps of Phaswane Mpe’s Welcome to Our Hillbrow and Ivan Vladislavic’s Portrait With Keys. But one gets a sense that Mpe and Vladislavic did it a lot more eloquently.

Jozi is a really quick read at just under 100 pages, something that left me feeling some chapters should have been longer. But towards the end, when some chapters tended to go on for longer than I thought necessary, I was slightly relieved by the book’s short length.

In spite of the length, many of the city’s social issues are touched on, such as HIV/Aids, xenophobia, crime, and even the mass exodus of retailers from the inner city during the transition to democracy in the 1990s.

On Braamfontein, Frank says: “Although many a lucrative commercial enterprises fled in the face of the urban influx that swiftly darkened the city, there were other businesses that stayed put, especially in Braamfontein. The buildings that house these places of commerce have, by and large, retained the cleanliness and gloss that was theirs in grander days. Residential apartment buildings, by contrast, have tended to buckle under the combined pressure of neglectful new ownership, overcrowding, poor maintenance and municipal inefficiency.

“The result is an uncanny incongruity in the outward aspects of Braamfontein, where sparkling office blocks are flanked by decomposing residential high-rises and ringed by streets strewn with debris, where hawkers, desperate and resourceful, dot the pavements round about.”

But if the city’s recent evictions of hawkers continue and gentrification has its way, hawking might also become a thing of the past.

Rest assured, though, there will always be someone – like Frank or Julius in Teju Cole’s Open City – who is keenly observing the city and its people through change. You can sense that Hlongwane really loves the Joburg inner city. His gaze is neither judgemental of the poor, the prostitutes and the drunkards, nor is it too romantic. In Jozi, he manages to find a balance, and I’m looking forward to seeing what else he has in store for us.