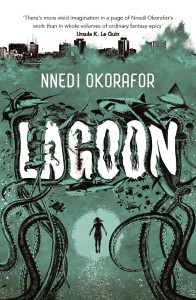 The 2009 multiple award-winning science fiction actioner District 9 pissed off a great many Africans. Neill Blomkamp’s tale simultaneously preached empathy with aliens who looked like monstrous Parktown Prawns and purveyed racist vitriol against Nigerian human beings – rather like the suburban liberal who cares more about her pet’s wellbeing than her gardener’s. For Nigerian-American writer Nnedi Okorafor, the movie “both intrigued and pissed me off so much that I started daydreaming about what aliens would do in Nigeria”. That was the starting point for her fourth and latest novel, Lagoon.

The cinematic inspiration is threaded through the text: in vivid, jump-cut scene changes; in noisy sound effects (the prologue is called “Moom!”); in intensely visual writing; and in the intertwining storylines and multiple points of view of different chapters.

Lagoon tells a tale of first contact in Nigeria. An alien ship lands offshore and three people on the Lagos Bar beach – Antony, a Ghanaian rap star; Agu, a soldier with a conscience; and Adaora, a marine biologist (“marine witch”, her newly born-again husband curses her) – are tasked by emissary Ayodele to “take me to your leader”.

That leads to three days of frantic flight, chase, capture and escape while cataclysmic natural and social events unfold: the book’s three acts.

Okorafor’s first adult novel, 2010’s Who Fears Death, garnered a slew of awards. It, too, was inspired by a media event: the publication in the Washington Post of Emily Wax’s June 2004 report on Arab campaigns of rape in Darfur: We Want to Make a Light Baby. The Coca-Cola Corporation made sure Americans became indignant about the (very real) abuses in Darfur. The conflict there threatened its most reliable supply of gum arabic, which stops those nine-plus teaspoons of sugar in your Coke crystallizing at the bottom. And for some readers, despite its accolades, Who Fears Death conveyed a Washington Post-style horror story perspective on the imaginary country the American media call “Africa”.

Lagoon, by contrast, is wonderfully specific, nuanced and affectionate in its portrayal of Nigeria, without ever airbrushing the problems. The voice of the city is there in the book’s use of urban pidgin and Yoruba, Igbo and Hausa terms. Agu and his family provide a link to more rural areas. Actors – even the villains – all have reasons for what they do. When the alien landing unleashes chaos in the city, it’s because a ruined environment, gender violence, desperate poverty and corruption were already present and boiling up. The alien landing just lifted the lid: “Pressure drop / you gonna feel it,” as Toots & the Maytals would say.

The book’s thoughtful intertextuality – tracing the connections between economic, gender and environmental oppressions – makes it very much a novel of current speculative concerns. While Blomkamp’s Joburg was just a backdrop to the cops ’n’ prawns action; Okorafor’s Lagos grants every situation and character the right to a backstory.

Lagos is in fact the most important character in the book. Enfolding myriad walk-ons, human and non-human, the organism of the city pulses, laughs – there’s a lot of broad humour in the book, especially at the expense of prosperity-gospel religion – and weeps. Lagos is also history, land and water, and its traditional gods and threatened wildlife also have a voice in the book: each act is prefaced by reflections from non-human life forms, among them the world’s most erudite bat, a vengeful swordfish, and Udide, Anansi’s scarier cousin. Because Lagos is a modern city, it has its modern monsters too, including a very hungry motorway.

The main human protagonists are more thinly sketched: we learn as much about them as we need to. All of this frames the genuinely terrifying alien emissary: Ayodele, whose nanopowered shape-changing makes humans sick to their bones. Ayodele is a wonderfully ambiguous creation: it dispenses the customary all-knowing alien wisdom – “Your land is full of a fuel that is tearing you apart” – but is also capricious and, so the other aliens suggest, perhaps rather junior in their hierarchy. Which makes the lot of them even more terrifying.

A much leaner tale, E B Dongala’s Jazz and Palm Wine, long ago asserted that the West does not have a monopoloy on first contact. Okorafor builds on those foundations to create a much more extensive fable that blends hard-edged urban realism with a genuinely magical sense of wonder.