Ricardo Soares de Oliveira’s Magnificent and Beggar Land: Angola since the Civil War (Jacana Media) explores the civil war’s legacy in a country where speedy economic growth is fuelled by oil sales, Chinese investment and extraction is rampant and the Dos Santos family continue to control vital parts of the economy and the political sphere. The following two excerpts from Magnificent and Beggar Land, contextualises a suggested future for Angola 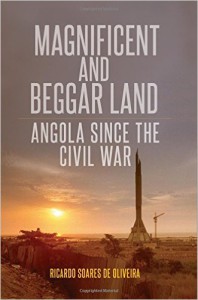 As night falls, stand at the tip of the Island of Luanda, the pleasure peninsula that separates the bay and the city from the open sea, and you will be awed by the prospect that lies ahead. The shantytowns and their inhabitants are almost invisible in the darkness. Instead, you will be dazzled by the brightly lit skyline of the modern city, with soaring skyscrapers added monthly, and by the new Copacabana-style bayside avenue.

On the Island itself, Africa’s priciest restaurants and bars entertain a cosmopolitan crowd, and far into the Atlantic Ocean, dozens of idle ships await the privilege of discharging their cargo in Luanda’s harbour.

From this perspective, Angola’s oil-fuelled decade of peace is nothing short of an economic miracle. Yet, not so long ago, Angola was a ravaged country where few outsiders dared to venture. A former Portuguese colony, Angola was isolated from the wider world by a vicious war that lasted more than four decades and only ended with the death in 2002 of the rebel leader Jonas Savimbi.

The conflict, which killed up to a million people, was tightly linked with international dynamics such as the struggle against colonialism and apartheid, the Cold War, and commercial appetite for petroleum and diamonds. Many external actors—Western oilmen, Cuban soldiers, Israeli gem dealers, mercenaries from the world over—played important parts in this protracted drama. But the war’s complexity and remoteness meant that it never inserted itself in the global consciousness. In Paul Theroux’s words, Angola remained “a foreign land without a face”, virtually unknown to all but a handful of experts. This makes Angola’s postwar experience all the more remarkable. In a short space of time, this so-called failed state became one of the world’s fastest-growing economies and sub-Saharan Africa’s third largest, with a GDP of US$121 billion in 2013. It is now China’s principal trading partner on the sub-continent and the USA’s second. Luanda, a magnetic metropolis pulling in 6 million Angolans and hundreds of thousands of expatriates, is routinely awarded the dubious title of the world’s most expensive city amidst a Dubai-inspired urban reinvention and a veritable onslaught of luxury consumer goods. Angola’s all-powerful regime, under President José Eduardo dos Santos’s (JES) firm control since 1979, defines the peace at home and plays its part on the international stage in a manner that is rare for African political elites. This book explores this extraordinary yet under-studied story.

Compelling in its own right, Angola’s decade of reconstruction also holds important lessons for the comparative study of state trajectories in the developing world. The outsized dimensions of Angola—of its resource endowment in particular, and all that flows from it—bring into stark relief dynamics that play out more discreetly elsewhere. Angola shows that there are robust visions of postwar political order that deviate from donor expectations of liberal state-building and choose not to converge with Western models. It also shows that elites, far from being weak or in need of capacity-building, have a strong degree of agency in defining the shape of institutions and the direction of their societies. Moreover, the study of postwar Angola sheds light over the political economy of resource-rich states in an era of high commodity prices. It provides a prism from which to assess the impact of resource wealth on the consolidation of regimes, the expansion of African capitalism, the prospects for economic diversification and the likelihood of the rise of states able to foster broad-based development. Lastly, as one of the star performers of the “Africa Rising” decade, and amidst a geopolitical transition that has seen China and other states emerge as major players on the continent, Angola is a pivotal case for inquiring about the changing position of African states in the international system. 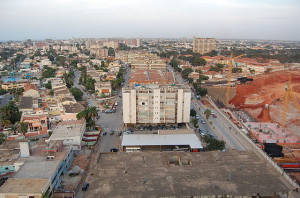 The medium-term implications of a turbulent political transition, increased social mobilization and a resource-dependent, volatile economy are clear: Angola will face a stormy decade as it awakens from its postwar political hibernation. Angola’s historical fault-lines have not been decisively bridged; they will reopen in new, unexpected forms. It is safe to assume that many of the old fractures remain fertile ground for social conflict.

The regime’s ongoing dynamic of exclusion will interact with the massive social change occurring throughout Angola in unpredictable ways. The mass migratory movement towards the cities shows no signs of abating, in the process emptying the countryside and creating new social and ethno-regional constituencies in the urban environment. As elsewhere in Sub-Saharan Africa, the postwar demographic expansion is resulting in a remarkably young population (by 2012, an estimated 63.7 percent of Angolans were below twenty-five years of age, with 54.2 percent below eighteen) for whom the war is a distant memory, if remembered at all, that no longer works as a deterrent to action. While their parents compare the current dispensation with the terrible plight of the conflict (and are therefore likely to still view it in positive terms), the reference point for the young is the global culture of consumerism that they are bombarded with but cannot access. Their frustrated yearnings are coming to a head.

Angola is changing at an extraordinary speed. The party-state does not fully understand or control this process, even when it is the unintended consequence of its policies. The MPLA’s legitimacy tropes—the liberation struggle, the civil war victory, even the early postwar threat of confusão—are quickly becoming redundant in Angolan political discourse.

In this cauldron, disruptive political phenomena are bound to emerge. The elite will be able to reproduce itself, its privileges and access to power. But it will do so in a fractious and contested Angola. A civic minded alternative to the MPLA that brings to power patriotic technocrats committed to “getting to Denmark” is implausible. Far more probable are populist reactions that marshal ethnic, regional and racial resentments, laced with xenophobic sentiment against expatriates, into a rousing critique of the postwar order. Dormant under the current national reconciliation rhetoric are a host of derogatory elite views about “backward” Ovimbundu (the “sulanos” or “bailundos” of Luandan street slang) and the popular perception of mestiço and white overrepresentationin the elite. The elite’s dependence on foreigners, already a lightning rod for criticism of the regime, will prove as unsustainable as it has been in other African contexts, ranging from Uganda to Côte d’Ivoire, where the locals played only a peripheral role in the running of economies.

Shrewd political entrepreneurs in the Hugo Chávez cast may come to mobilize these frustrations into a more structured discourse of class grievance. Luanda’s vast shantytowns in particular seem prone to this sort of mobilization, with 1970s Nitismo providing a powerful portent. Alternatively, the increasingly criminalized slums may explode into the sort of gangland violence typical of Latin American cities. Either way, the urban poor will not stay at the margins of Angolan political life. Angola’s potential remains unrealized. The “magnificent” promise of this book’s title continues to be elusive, the abject poverty of most Angolans far too real. Yet Angola’s long-term prospects are more optimistic than those of so many African countries that are landlocked, internally divided and stuck with non-viable economies. We don’t know what the political future of, say, the Congo holds, but in a hundred years there will be an Angola. Angolans will not build their future from scratch; Angola is growing within its battered confines as well as accumulating new contradictions that result from the MPLA’s choices. But Angolans have more space for self-fashioning now than ever in their tortuous history.

With the trail of blood of the last decades, only someone irresponsible would wish further radical transformation upon Angola. A better life for the masses, however, can only be the outcome of the relentless press of political mobilization, the rallying of Angolans around aspirations for a more dignified life. Nothing will be given to them for free. Whatever comes to pass, Angola will not stand still. There is electricity in the air. Angola começa agora. Angola starts now.