Perhaps the problem started because of the distance between the church and our football pitch. My struggle to deal with the authority imposed on me didn’t make things better. The pitch wasn’t so much a football stadium as it was an open space on a slope. It barely had grass, but the ground was soft enough for us to put up two poles to serve as goals. There were no crossbars, so high goals were judged by whether the goalkeeper jumped or not.

It was in such a bad state that cows wouldn’t graze there. I knew this because some of my team-mates herded cows, and they never took them there. It was a good thing because those cows wouldn’t have been allowed to waddle in our sacred temple. The only cows that graced our place of worship were those who played football as if their legs were tied together. We welcomed them because they made some of us look good. My grandmother had her church, I had that “stadium”. If you listened close enough, you could hear the drum that beat from her church, which in our ears was heightened to the deafening levels you hear at the Africa Cup of Nations.

The slope of the field meant there would always be heated discussions at the start of every match about which team would start downhill. A coin toss never suppressed the discussions, with each side preferring to start the match climbing up the slope so they could bombard their opponents with shots from far in the second half. But this was our Maracana, our Old Trafford. It was the theatre in which we lived our dreams.

In that “stadium”, our real names were temporarily suspended. It was our parents, especially when we were in trouble, who called us by our real names. We preferred to use the nicknames we gave ourselves. It was the only place “Bebeto” would play in the same team with “M’Boma ”, “Baggio” and “Shoes”. Those who were brave enough for a whipping would write their names on the back of their T-shirts with the number to match. I wasn’t one of those.

Bebeto was marked only in my heart. I couldn’t bring myself to commit another offence, because by simply appearing there I broke probably the biggest sin of all in my late grandmother’s eyes – skipping church to play football. Maybe that’s where my atheism started. But I don’t call myself an atheist because there is a religion I follow – football.

In the Deyi household, my mother’s home, where I grew up in Harding, KwaZulu-Natal, Sundays were always the same. We would all wake up around 6am, an hour after my grandmother had woken up to make porridge for her many grandchildren. After a serving of porridge, we would clean the house and the yard before taking a bath and going to church. The service started at around 10am, but because my grandmother was among the elders whose job was to guide the youth, we went there at around 9am. It would go on until 5pm because amazayoni awanaskhathi (Zionists don’t have time).

Those two words were so powerful, they would be enough to explain why they arrived late for a prayer at a fellow church member’s house. They would also justify three hours of singing, where the Holy Spirit would engulf those who possessed it to the point of them going into epileptic spasms and then relaying what the spirits had told them about one of the devotees. I didn’t possess those spirits, and they didn’t possess me. The only spirits that would take me to those levels of elation were found on the football pitch. But I couldn’t play soccer on Sundays because it clashed with church.

One Sunday, I had the great idea of skipping church by pretending to go outside to pee. Once I was out, I rushed to the stadium. Everything went well until my grandmother popped out. I was too stunned to do anything. She gave me a holy whipping on that pitch in front of my friends. My father, a former footballer, laughed when I told him that story. He was also a football devotee with no time for church. He would walk my mother to their night vigils and fetch her in the morning without entering the Lord’s house. 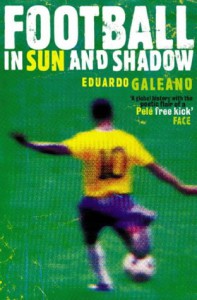 As embarrassing and painful as that beating was from my grandmother, it was worth it because there was nothing that brought me greater joy than football. It was my religion. As I grew up, I found my religion’s bible, Eduardo Galeano’s Football in Sun and Shadow.

The late Uruguayan author – who died in April from lung cancer, aged 74 – might have been famous as a literary giant of South America, but he was also a fellow football disciple. I found Football in Sun and Shadow to be of biblical proportions, written in short staccatos documenting the history of the beautiful game.

Galeano wrote about the game’s gods; from Maradona, who, when he was young, “slept with his arms around a ball and by day … performed miracles with it”, to Garrincha who, “perform[ed] devilish tricks that had people dying of laughter”, and Di Stefano, who was there “at the beginning, during and at the end of every scoring play”.

Galeano’s pen didn’t spare the football devils. Whether it was former Fifa president João Havelange, who reigned in an era in which “the profits generated by these [World Cup] tournaments have multiplied so prodigiously that the biblical miracle of bread and fish seems like a joke in comparison”, or Sepp Blatter, “a Fifa bureaucrat who never once kicked a ball”. Blatter took over from Havelange in 1998 and has been at the helm since.

Galeano also slammed the other devils – the sponsors who turn footballers into walking billboards and broadcasters who stage games at times convenient for their viewership and not the players or fans who go to the stadium.

Galeano was a historian, a critic of imperialism, and a man who hated the abuse of power. He suffered from men who abused their power, first by being arrested by them and then forced to go into exile twice. He left his country of birth for Argentina after a military coup in 1973, and then in 1976, left Argentina for Spain after a coup there. Uruguay, Argentina and Chile banned his book Open Veins of Latin America: Five Centuries of the Pillage of a Continent during their years of military dictatorship.

Galeano was a lot like one of his favourite players, Maradona, whose sprawling body is on the cover of Football in Sun and Shadow, and who gets the most coverage in the book. Both men excited with their talent and weren’t shy to voice their anger at those in power when they felt they were short-changed.

“The machinery of power had sworn to get him,” Galeano wrote about Maradona. “He spoke truth to power and you pay the price for that, a price paid in cash and no discount.”

Galeano paid with the 12 years he spent in exile, only returning home to Montevideo in 1985 after the military dictatorship fell. It was in Montevideo that the young Galeano wanted to be a football player.

“I played quite well, in fact I was terrific, but only at night when I was asleep,” he confessed. “During the day I was the worst wooden-leg ever to set on the little fields of my count. Years have gone by and I’ve finally learned to accept myself for who I am: a beggar for good football. I go about the world, hand outstretched, and in the stadiums I plead: ‘A pretty move, for the love of God.’ And when good football happens, I give thanks for the miracle and I don’t give a damn which team or country performs it.”

Galeano must have searched for the nearest stadium to watch his beloved football club, Nacional, or whoever was in action when he finally arrived up there. Down here, he left us with one of the greatest books ever written about football.

“In this sacred place [the stadium], the only religion without atheists puts its divinities on display,” he wrote about the fan’s love affair with the stadium. “Although the fan can contemplate the miracle more comfortably on TV, he prefers to make the pilgrimage to this spot where he can see his angels in the flesh doing battle with the demons of the day.”

His description of the goal, “football’s orgasm”, the goalkeeper, “they say where he walks, the grass never grows”, and the ball, as a “woman who wants to be caressed, kissed, lulled to sleep on the chest or foot”, makes you want to pull out your eyeballs at the sight of the dreary words on the back pages of our newspapers. Galeano showed that a football writer can have as much fun with the keyboard as a child with a ball at his feet, with not a care about anything else. His book pays homage to football, “celebrating its light and condemning its shadows”.

“For years I have felt challenged by the memory and reality of football, and I’ve tried to write something that was worthy of the great pagan mass, able to speak such different languages and unleash such universal passion,” Galeano wrote. “By writing, I was going to do with my hands what I never could accomplish with my feet: irredeemable klutz, disgrace of the playing fields. I had no choice but to ask for with words what the ball I so desired denied me.”

And so football’s bible was born.