“Yoh, this is some Steve Biko shit,” said the high school learner to his friend next to him. I smiled as I overheard their conversation. I was sitting on his other side in the State Theatre in Pretoria in February 2014. We were watching a performance of George Orwell’s Animal Farm.

Orwell’s original novel was published in 1945 and was a parody of the Russian Revolution of 1917, extending its criticism into the Stalin era of leadership.

The book was shaped by Orwell’s experiences as a solider in the Spanish Civil War, a period he documented in his book Homage to Catalonia, published seven years earlier than Animal Farm in 1938.

Animal Farm tells the story of Manor Farm, where the animals rise up against the farmer and reclaim the farm. But later the pigs, who led the revolution, begin to claim more rights for themselves, violating the sacrosanct principle that “all animals are equal”.

Lenin (Old Major), Stalin (Napolean) and Trotsky (Snowball) are all present in the story, as are the Russian working class (Boxer). The South African adaptation we were watching was presented by ShakeXperience and directed by award-winning theatre writer and director Neil Coppen.

This was a mere four months after Public Protector Thuli Madonsela, while addressing the Black Management Forum’s annual conference, warned against an “Animal Farm” culture developing in South Africa. “The few who manage people’s affairs should not look after their own affairs first,” she is reported to have said.

Coppen’s daytime performances of Animal Farm, a high school set work, were geared towards learners. From the State Theatre, the play travelled around the country, influencing and conscientising many young minds along the way, scooping two Naledi Theatre Awards for Best Production for Young Audiences and Best Ensemble in the process.

A month after I watched Animal Farm at the State Theatre, Madonsela again took to a podium, this time at Wits University days after she had just released her full report on Nkandla. Again she chose to use the Animal Farm metaphor to say things she probably felt she couldn’t say.

“The animals that liberated most of the other animals were the pigs,” she said. “After some time, the pigs started to feel that [because they liberated the other animals, they deserved better], and after time the pigs started to eat more than the others … [the pigs] do all of the thinking, they do all of the coordination, they liberated the animals, they deserve to be fed better.”

Madonsela’s comment was perfectly illustrated a few years earlier at the ANC centenary celebrations in Mangaung in August 2012, when former deputy president Kgalema Motlanthe proposed a toast to a half-empty stadium. On that day, Motlanthe told the crowd that if they did not have champagne, they could take photographs of their leaders drinking, or raise clenched fists.

“The leaders will now enjoy the champagne, and of course they do so on your behalf through their lips,” he said. The elite enjoying the spoils on behalf of the working class smacks of unchecked arrogance. 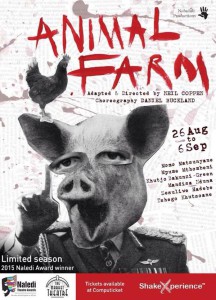 Fast-forward to today and Animal Farm has finished its year-and-a-half run of school shows and finds itself at Johannesburg’s Market Theatre for a criminally short run from August 25 to September 6.

Again I find myself sitting in an audience for the preview show on August 25, except this time I am sitting in a theatre full of adults and critics. The audience is in hysterics most of the time; they are not as shocked by this darkly tragic play as the high school kids were back in February 2014. They laugh at all the right places, but I can’t help feeling that nobody’s eyes are being opened tonight. 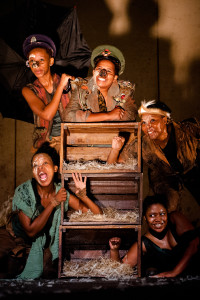 Matsunyane says that when a child makes a comment like that, you get the sense their thoughts are being shifted. “We don’t necessarily have to change everything in one day,” she says. “When you realise that a kid can reference Steve Biko while watching Animal Farm … it’s that thing about planting a seed.”

Nduna jumps in. “I think it’s also important for us to realise that these born-frees are not clueless,” she says. “There are those among them who know and make a conscious effort to read up about their past.”

I ask if the way the play has been adapted to reference many contemporary South African political moments such as Marikana, Nkandla and The Spear helps the kids to make connections to people like Biko and President Jacob Zuma.

“I think that plays a huge part in him making the connection,” says Matsunyane, who suggests the African accents in the performance also play a huge role. “We are Africans and we are in Africa – we are not about to put on a British accent,” she says. “That creates distance from who we are, and that’s why this production is slap bang in the face … I can hear my grandmother in Clover, I can hear a speech by Malcolm X in Snowball, and I know Mac Maharaj can maybe pick up on a bit of himself in the play.”

Hadebe says that when she went to the audition, she didn’t realise the production was for schoolchildren. “I loved the idea because it’s such a powerful story,” she says. “These young ones of today, these born-frees, they are not clueless, but it is up to us to be able to show them certain things.”

“This production means that maybe I might just be able, through my art, to make someone think in a different way,” she says. “It could be one person, it could be two people, and for me that’s good enough.”

“When I was in high school, I read the book as an English set work,” says Matsunyane. “At the time, it didn’t make as much sense to me, but as I got older, I began to understand our systems of governance and stuff like that, and I started to see the correlations and say, ‘Hey, that book, this is what it was talking about’,” she says.

Mthombeni says she read Animal Farm in grade 8. “We didn’t even understand what was going on, we just [understood the characters] literally as animals,” she says. “It was like a comedy to us. But now when my son did it last year for matric, I started reading it again and I saw its relevance in our country,” says Mthombeni. “I hope that this can plant a seed and encourage children to converse.”

I ask what have been the most unexpected reactions from the kids.  Nduna says that sometimes it feels like the kids laugh at inappropriate times. “Some of the kids laugh, for example, when Boxer dies,” she says. “And Khutjo actually made me realise that they are not laughing because they think it’s funny. It’s the way they are dealing with what they have seen, which is not a positive situation,” says  Nduna.

“She made me realise that we as a nation deal with certain things by not facing them, but by laughing at them or poking fun at them and making jokes about them. It’s how we deal with tragedy as a nation,” she says. “For me, that was very surprising. I thought that was sad,”

Matsunyane jumps in. “Something that really stood out for me was how the kids respond to the animals and want them to succeed,” she says. “Whenever there’s a battle, they want the animals to succeed, and that’s why they clap when the horse kicks out the farmers. That really spoke to me. When they start to see Napoleon’s rise when he takes out the chicken and starts to eat, they are like, ‘Sies, how could you do those things to your own people?’”

The cast mention that they wonder what government leaders would think if they watched the production. “I felt the play couldn’t be timed better than right now,” says Matsunyane. “The biggest irony of this play and the fact that it’s a set work is that I doubt anyone in government has read it, especially considering the direction our nation is heading. I don’t think they’d want schoolchildren to see this.

“But I really wish we could have all of them come watch and have a dialogue with them,” she says. “For me, that would be my greatest gift. If I could have every member of Cabinet sitting here to say, ‘These are the struggles we have when it comes to power; this is what happens with dictatorship; this is what’s happening; this is not what we want for ourselves’.

“It’s not nice for my grandmother to say things might have been better under apartheid,” says Matsunyane. “That doesn’t make me feel good as a black child.”

Bakunzi Green says South Africa is a country that hasn’t necessarily transitioned in the way it perhaps should have. “We are sitting with people who have not spoken; we are sitting with people who have not healed, who are not healing because platforms for dialogue are not created,” she says. “I think theatre can provide that platform. Theatre can be a vehicle for people to speak out and purge what they are feeling and what they are sitting with so that we can start healing,” says Bakunzi Green.

She suggests the all-female cast creates an important dynamic. “I feel like it’s given black females space to play on the same field as men, and it’s okay,” she says. “It shouldn’t be a gender thing. It should be about performers kicking ass and telling a great story,” she says.

All pics by Val Adams