Steven Friedman’s new book Race, Class and Power: Harold Wolpe and the radical critique of apartheid was published recently by UKZN Press. The Con brings you this excerpt from chapter 11 of the book, titled A few small areas in the vicinity of Beijing: Harold Wolpe and post-apartheid South Africa. 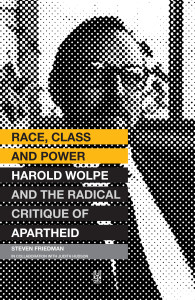 Twice during his life, Wolpe was obliged to confront the tension between his loyalty to the movement and his commitment to his ideas. The first time was when he was sidelined by the SACP and, to a lesser extent, the ANC. The second was when, in the last years of his life, he sought to come to terms with the beginnings of post- apartheid society.

Saleem Badat says that Wolpe was ‘greatly excited by the political transition and the victory of the ANC’. Although he accepted that ‘the legacy of severe socio-structural inequalities and the terms of the transition’ made unlikely a ‘total displacement of old institutions, overall he was optimistic about the prospects of far-reaching changes’. He also saw ‘the logic . . . of consensus politics’ but feared that consensus among the elites would be gained at the expense of the ‘dispossessed’ and was ‘alarmed’ by signs of an ‘unwitting embrace of the modernisation and human capital . . . paradigms of the 1950s’. He was ‘all too aware of the parallels with the contemporary banal proclamations of the end of history and the death of ideology, so that we are more effectively ensnared in the . . . attitudes of “greed is cool” and “get what you can and screw the rest”’.

Wolpe may also have found negotiating a democratic Constitution strange – and a little uncomfortable. He had spent much of his life assuming that apartheid would be defeated by a revolutionary upheaval; a process which hinged on compromises between its beneficiaries and victims must have challenged many of his assumptions. The society which emerged, characterised by deal-making between politicians and interest group leaders, was not that which he and other Marxists had expected. He may have felt this more acutely than his friend Joe Slovo because his relegation to the margins of the movement meant he was not privy to the strategic debates that prompted the ANC to participate in a transition in which power was negotiated, not seized.

And so it should be no great surprise that Wolpe did have misgivings about the new order. Or that his doubts were expressed in an academic article, in language which sought to make the criticism as oblique as possible. Perhaps learning from the reaction to his writings on CST, he was at pains to suggest that the ANC may already have considered the issues he raised. But the article clearly expressed doubts. Wolpe had moved to a subtler and more accurate understanding of the way in which societies change and so he did not crudely denounce the movement for ‘selling out’. But he did question whether it was moving the society decisively away from its past. His article touches on important current issues. It is now common for some on the left to claim that the advent of formal democracy in 1994 changed little. For some, the reason lies in a failure to confront capitalism; for others, in continued racial domination. Wolpe’s understanding of what was then possible is an important prism through which to explore these claims.

Like many who evaluated Wolpe’s work, Dan O’Meara believes that ‘the new South Africa cries out for the kind of rigorous critical analysis to which Harold subjected the old’. Badat recalls that he and others at the EPU ‘implored’ Wolpe to write an analysis similar to RCAS of post-1994 South Africa. Stephen Gelb says that in 1995, Wolpe complained to him ‘about the decline in quantity and quality of Marxist analysis in South Africa’. They discussed producing an issue of Economy and Society which would ‘try to regenerate the debate’ by applying theories of class to post-apartheid South Africa. The 1995 Transformation article gives an idea of the analysis Wolpe might have offered. It suggests that it would indeed have provided a much-needed diagnosis, but not quite that which may have been expected.

As noted earlier, the article, which appeared in Transformation, was a critique of the RDP White Paper. This policy statement of the Government of National Unity adopted a modified form of the flagship document of the ANC alliance – a programme to reconstruct and develop democratic South Africa. The article was, for Michael Burawoy, Wolpe’s ‘coming out as a critical theorist’, his clearest published critique of an ANC or SACP position. Many who followed his work see it as criticism of the concessions the ANC made to conservative forces. But his argument is more subtle – and highly relevant to today’s debates.

His key critique of the document (and of the priorities of the Government of National Unity) was that it adopted a ‘consensual model’; it assumed a consensus on the meaning of ‘fundamental transformation’. President Nelson Mandela’s preface to the White Paper asserted that the ‘interdependence of reconstruction and development and growth’ were now widely accepted. Other passages also suggested a broad consensus on priorities. The White Paper recognised that civil society organisations have ‘their own aims and goals’ but urged them to join this consensus. Wolpe insisted that no such consensus was possible.

All societies, he wrote, have limited resources and so they face ‘intractable tensions between development and growth’, which result in contestation between social groups over priorities. The inequalities created by apartheid mean that these divisions are sharp. No consensus is possible, however hard the RDP tried to wish one into existence. Whether export-led growth or basic needs should enjoy priority was only one of the points of contest. Divisions were not necessarily an obstacle to change – a balance between growth and needs was possible. ‘But . . . the tensions cannot be eliminated by fiat of the RDP’; its approach made difference harder to handle by hiding it – radically different, even opposed, ideas are ‘presented as falling quite unproblematically within the asserted consensus’. Assuming a false consensus was likely to cause conflict. Given Wolpe’s argument for negotiation on higher education, it seems probable that here too he had in mind inclusive bargaining.

Wolpe here was not a socialist voice in the wilderness of a capitalist transition. He noted that the RDP did not question ‘the continuity of the capitalist system’ and contrasted this with the draft Strategy and Tactics document of the SACP which sought the ‘socialisation of the predominant part of the economy’. But he mentioned this, he said, merely to show that there are contrasting visions of ‘fundamental transformation’. He doubted that socialism in one country was achievable in the global environment in which he was writing, so socialism was not then on his agenda. His critique pointed to the need to take difference seriously and to see sustainable change as a consequence of engagement between differing interests, not of wishing away difference and relying on management technique.

The RDP started life as an attempt by Cosatu to bind an ANC government to strongly redistributive policies. By the time it was complete, in 1994, it had been negotiated, tweaked and kneaded in many meetings: it went through six drafts. The outcome was a fudge – it urged, on successive pages, tougher environmental controls and measures to promote rapid industrial development. It soon became a nebulous source of elite unity – a rationale for any policy proposal and a flag of convenience to special interests who appealed for government favours. That it achieved iconic status as a charter for redistribution after the government adopted in 1996 the ostensibly more business-friendly Growth, Employment and Redistribution strategy owed far more to the meanings which the left within the ANC chose to place upon it than to what it said. Many of Wolpe’s criticisms of the White Paper could have been made of the RDP document itself.

The thinking Wolpe criticised is with us still. During 2012, the government began pursuing ‘social cohesion’, a concept popular among some Northern academics and policy-makers. The parallels with the RDP are clear. Both wish away difference. And both make a negotiated response to poverty and inequality more difficult. Talk of ‘social cohesion’ may produce ‘consensus’ behind goals which are so vague that they change nothing; this is arguably the fate which befell the RDP until the adoption of the Growth, Employment and Redistribution strategy gave it a mythical status. Or the attempt to achieve cohesion will encounter differences so deep that no agreement will be possible. More disturbingly, the elites in government and the economy might agree that the poor threaten social cohesion and seek to reshape poor people in their image. There can be no effective response to poverty and inequality unless difference is recognised and negotiated, not dissolved in the search for an unattainable (and undemocratic) cohesion.

Was Wolpe’s Transformation article the break Burawoy and others believed it to be? While it was a more explicit critique of ANC policy than Wolpe’s work in the 1980s, it was not more so than the first part of his critique of internal colonialism. It was also written in a way which suggests that Wolpe still clung partly to his refusal to analyse consciousness, for he was at pains to avoid creating the impression that he was telling the ANC in government what to do – he tried, he said, to raise questions ‘which could not, perhaps, be dealt with in the RDP or White Paper’. So it may have been far less of a ‘coming out’ than Burawoy believed.

But it did argue for a fundamentally different approach. Almost twenty years into South Africa’s transition, failure to acknowledge and negotiate social and economic difference has emerged as the key weakness of the new democracy. Government documents urging a ‘social compact’, and talk of an ‘economic CODESA’, equivalent to the constitutional negotiation forum of 1991, reveal the tenacity of the difference Wolpe observed and the pressing need to confront it in the manner he recommended. It is unclear what would have changed had the ANC listened to Wolpe on class. It seems likely that much would have changed had it listened to him on the RDP.