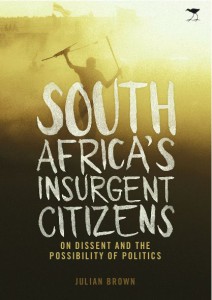 In the first months of 2014, a wave of protests was registered across South Africa – and, in particular, across Gauteng, the country’s smallest and most populous province. These protests attracted a significant degree of attention, as a series of news reports suggested that this wave was unusual – that the number and intensity of protests was unprecedented in recent times. This, however, was an exaggeration: the ‘wave’ of protest simply reflected a mild intensification of the patterns identified over the past decade.

Still, the situation seemed to call for a political response.

On 10 February, the Gauteng provincial government issued a statement in which it announced the formation of a ‘high level task team’ – consisting of the Premier, members of the provincial cabinet, and the bureaucratic heads in charge of the departments of Health, Community Safety, Human Settlements, Economic Development and (inexplicably) Sports, Art, Culture and Recreation – to devote ‘high level attention and resources to the situation which has claimed human lives and essential public properties.’’ As a first action, the task team ‘appealed [to] and encouraged communities to protest within the confines of the law and refrain from destroying or damaging public property or infrastructure during protest actions.’ The task team explained that ‘protesting communities’ should remember to ‘allow ambulances to go through and … allow children to go to school’ during their protests; in addition, the task team explained – this time in a  direct quote, attributed to the team itself, rather than in the apparently neutral text of a press release – that ‘the destruction of public property deprives communities of much-needed services and creates the additional burden of resources being diverted to restore and repair the damages … the cost of the destruction and long-term damage to the economy runs to millions of rands.’

The remainder of the statement developed into a civics lesson: after having reminded protestors to remain within the bounds of the law, and having warned them of the perhaps-unintended economic consequences of their actions, the task team proceeded to alert the public to the existing institutions already in place to resolve their potential discontent.

‘If community members are unhappy with any aspect of service delivery, be it the pace or quality of the services, they should take these up with the ward councillor, if they do not get any assistance, they should escalate the matter to the municipality, then the department of Cooperative Governance. If these do not yield any positive results, they must lodge a complaint with the Premier’s Office through the Premier’s hotline on 08006001100…’

A second statement followed two days later, in which the roll call of these procedures was amplified to include: ‘ward councillors, ward committees, petitions committees in municipalities, public petitions committee in the legislature, Community Development Workers (CDWs), Community Liaison Officers (CLOs), Premier’s Hotline, Presidential Hotline, Integrated Development Plan (IDP) forums and izimbizo.’ This came in the context, again, of a reminder to ‘disgruntled communities to abide by the Regulation of Gathering Act during the protest action.’ It added that: ’the task team further emphasised that it is vital for organisations and individuals to empower themselves with the detailed provisions of the Regulations of Gatherings Act.’

This was not all.

A few days earlier, the provincial commissioner of police had held a press conference in which he announced that recent ‘protest actions have stretched our resources to the limits.’ He gave figures: 569 protests had taken place in his jurisdiction over the previous three months; one hundred and twenty-two of these protests (i.e., approximately one in five, or twenty percent) became violent, or involved violent clashes between protestors and police. The scale of these protests was such that the official section of the police responsible for public order policing were being forced to call in assistance from under-trained police officers – and this, in turn, was perhaps contributing to the exacerbation of the situation. Indeed, this might have contributed to the increase in deaths in the course of these protests: at least eight people had been killed in January alone, and confrontations between the police and protestors had become increasingly fraught.

The police commissioner told the gathered journalists that: ‘the South African public must realise what is confronting members [of the police service] on a daily situation with the issues of protest marches and demonstrations. These are not petty things, these are not issues where you can say “go read a book… and it will tell you how to deal with these issues.”’ The protests themselves were dangerous situations, more dangerous than ‘armchair critics’ might realise: ‘the community actions that we’ve seen in the last few days are pure criminality in the form of vandalism.‘

‘In the long term,’ he added, ‘the people are seeing the police in front of them and may think the police are the enemy. And the situation might build up where the police become the enemy.’

The way in which the state sees its citizens is demonstrated by the government’s responses to protests in Gauteng. There is a thread running through these responses: a suspicion of protestors, reinforced by a distinction between them and respectable members of the public. Citizens are divided into those who follow the ‘proper procedures’ – and thus receive rapid and appropriate support from the state – and those who do not. The public follows procedure. Protestors do not, and are thus assumed, in the first place, to be ignorant of the existence of these proper procedures, and of their ability as citizens to petition the state – through ward councillors, committees, and telephonic help-lines – for appropriate aid. In addition to this fundamental ignorance, protestors are also imagined as fundamentally irresponsible: as likely to prevent ambulances from travelling through an area of protest, or forbidding children to go to school. This irresponsibility shades easily into ‘pure criminality’: from blockading streets to vandalism.

In other words: the existence of a wide range of legitimate (‘proper’) mechanisms through which citizens can participate in the state’s practices of governance validates the rhetorical and actual exclusion and criminalisation of citizens who do not choose to make use of these mechanisms.

For the state, then, the legitimate avenues for political action – as defined in this case by the government in Gauteng – are those associated with ‘participatory democracy’ or ‘participatory governance.’ These are intended to provide mechanisms through which citizens can either petition the state for a particular response, or more simply articulate their particular position on an issue or set of issues. These petitions and preferences will then be taken into account by the state and, ideally, shape both the development and implantation of policy at the local level. These processes of participation serve an important legitimating function in South Africa’s democracy: they create a space within which the desires and needs of citizens can be incorporated directly into the country’s politics, thus emphasising the democratic nature of the post-apartheid order.

They also serve as the primary means through which the state seeks to shape practices of political citizenship – to shape, in other words, the expression of political agency by South Africans, and their communities. As such they are the sites within which certain practices of citizenship are legitimated by the state – and others, by implication, delegitimated. But there is more to this – the effect of following the prescriptions set out by the government of Gauteng would be to limit political action to participation in the election of officials, and to intermittent acts of petition.

Many protesting communities have in fact attempted to make use of these participatory institutions – and have attempted, repeatedly, to petition the state for support and engagement. It is often only in face of the failure of these processes that they have embarked upon protest. In the words of an activist in Thembelihle – the site of several disruptions in the past decade – the community only embarked upon protest once it had ‘lost confidence in the petitions committee, the City structures, Region G administration and the Office of the Speaker, amongst others.’ This is not the voice of someone who is ignorant of the resources formally available to him; nor is it the voice of someone who has wilfully chosen to ignore them. Instead, it is the voice of experience – and of disillusion.

This book is concerned with teasing out the dynamic between political expression and repression in contemporary South Africa, and this set of actions by the police and the state points to a particular set of relationships within this dynamic: those between disruption and discipline. Not all protests provoke a violent response; nor are all disruptions of order themselves protests. Nor is the police response to potential disruption necessarily repressive – in some circumstances, the state may seek to discipline and direct grassroots political energies into its own project of consensual governance.

But when this fails – and discipline gives way to disruption – the state turns violent.

Julian Brown teaches in the Department of Political Studies at the University of the Witwatersrand. He is the author of South Africa's Insurgent Citizens: On Dissent and the Possibility of Politics (Zed Books/Jacana: 2015) and lives in Johannesburg with his husband. View all posts by Julian Brown →