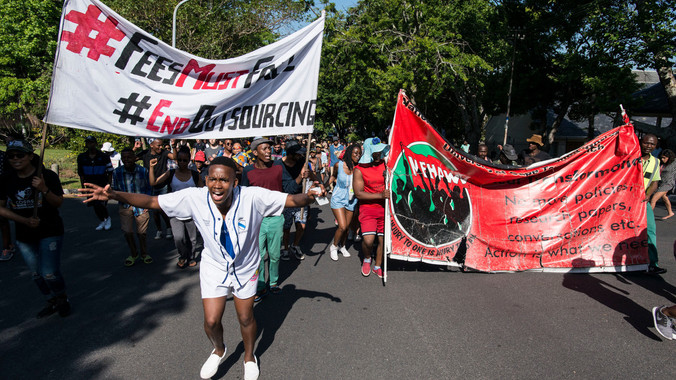 On Monday, 19 October, students supporting the #FeesMustFall campaign when to the University of Cape Town’s main administration building, Bremner (also known as Azania House during the #RhodesMustFall occupation last semester), in order to talk to management about the planned 10.3% university-fee increase for 2016.

The #FeesMustFall activists say that the interdict came as a surprise. Some members of the university management engaged them, they say, whilst other sought an interdict. Effectively, they are implying that the senior staff members who were engaging them were decoys. Students therefore questioned management’s good faith in their approach on that day.

By the time I arrived at Bremner in the early evening, the Dean of Humanities was still on the scene. He had been there since about 13h30. Like many other staff members, he was there out of concern for the students’ safety. Some students had occupied Mafeje Room in the administration building, while most of the other students were on the steps outside of the building.

The police were present wearing riot gear armour, helmets, armed with guns, rifles and large bullets studded on to their belts. They were ready for war. As the evening dragged on, it was clear that they were getting amped for action. At one point, a hippo charged on to the scene, engines revving, and stopping for a moment at the steps where students were sitting. This scared everyone. Violence seemed imminent. It then raced off to the corner where the other police officers were stationed. This was a scare tactic.

My colleagues and I went over to the police to dissuade them from initiating violence. One of the officers with whom we tried to engage was not interested in hearing our pleas. He said that they were mandated to resolve the matter, removing the students in accordance with the court order – with force. He spoke the language of an apartheid-era policeman, citing the law and stating that he had orders to follow. Attempts to engage with other officers were also not productive. They seemed to have a particular understanding of the law, particularly the Constitution.

It was clear that they refused to acknowledge our argument that the students presented no physical threat, that they were unarmed and that they would not resist arrest. UCT management was not on the scene. We could not turn to them and appeal for mercy. Once SAPS approached students on the steps, each student was lead to a police van or the noisy hippo with little fanfare – full cooperation from the students. They did not arrest protesters, but seemed picky about who they selected.

Afterwards, students told us that the hippo was backed up in front of the steps for a reason: those of us who stood across from Bremner could not see what was actually happening on the steps. Students said police trampled on some them and elbowed others – note that they were wearing armour. All the while, a plain clothes policeman was documenting everything on video, occasionally directing uniformed police officers. Evidence was being gathered, presumably to help SAPS profile potential ‘ringleaders’ and gather evidence.

Once the hippo and vans were filled, the hippo made its way out, but then stopped and made a U-turn to return to the students. Nothing prevented the hippo from leaving. There were no obstacles. By then, some students clambered on to it. The hippo returned to the students who were left behind outside Bremner. They sang, cheered and gathered around. As the action unfolded, I was documenting via Facebook. As I typed away furiously on my phone, I made my way to a low wall across the building in anticipation of what I thought was an ambush in the making. That’s precisely what happened: multiple shots were fired, pandemonium, frantic running and crying, students ducking behind the wall where I was typing away.

Students and staff members alike experienced the violence of the police officers’ message. Their communication was as clear as a bullet in the chamber. They were intent on a performance of violence and got some satisfaction. As SAPS left, people came out from their hiding places – dazed, traumatised, violated.

I say violated because I had always assumed that the university was a safe space, one where debate, protest and dissent were possible without inviting the aggression of apartheid-era police tactics. Unlike the approach adopted by Wits VC Prof Adam Habib, UCT’s instinct was not to engage, but to invite a “tough”, masculinist performance into a space that is grappling with racist, patriarchal inheritance. The performance of the police at Parliament was therefore prefigured by their performance on campus – both performances suggest that SAPS has not changed at all.

As the Khayelitsha Commission has revealed, police’s ability to protect citizens in poor neighbourhoods leaves a great deal to be desired. We have also seen a steady stream of reports about mall heists, car hijackings, armed business robberies along with the fearless activity of notorious ‘crowbar gang’ (or gangs). We often hear arguments that SAPS is under-resourced (either in terms of staffing or functional vehicles, or both) and that this constrains its ability to do its job effectively. However, SAPS seems to use utilise available resources rather well in situations where civil protests take place, as seen in its heavy-handed response to university students’ march on Parliament this past Wednesday 21 October, as well as in Marikana.

Brute force is never in short supply. However, a consistent and nuanced approach to violent crime and corruption seems unattainable, for some reason. Is the SAPS mandate to secure elite interests? Has it transformed since the fall of legislated apartheid? More importantly, how do we read these failures to address crime and a readiness to suppress civic action in relation to the president’s recent defence of the Media Appeals Tribunal, the Film and Publication Board’s plans to ‘regulate’ online publication with the supposed intention of preventing child pornography and the Protection of State Information Bill? It is hard not to think that these draconian measures are a threat to our Constitutional democracy.

But, more importantly, why is UCT management inviting such kragdadigheid on to a campus that places a high premium on the Constitution and prides itself on the stance that it took against apartheid (as attested by the many framed photographs of student activism that you will see in its impressive library on upper campus)? Why would you violate the trust of students and their parents? Why not pursue dialogue and join students in engaging government on the issue of university funding? Why escalate conflict to the point where police enact unprovoked violence on students and concerned staff, who were also warned / threatened by police? Why escalate it to the point where students take the battle to the streets and end up being further abused by police at Parliament? Who takes moral responsibility for what happens to our students?

UCT has set a dangerous precedent, one that is consistent with the heavy-handed approach of police in the city on Wednesday. One that potentially sets the scene for the kind of violence we witnessed at Marikana and in Ficksburg. Who knows what will now become possible on campus?

Adam Haupt is Associate Professor in Centre for Film and Media Studies at UCT. He chairs the Humanities Faculty Transformation Committee and is a member of the Black Academic Caucus (BAC). He writes in his personal capacity.

Adam Haupt is Associate Professor in Centre for Film and Media Studies at UCT. He chairs the Humanities Faculty Transformation Committee and is a member of the Black Academic Caucus (BAC). He writes in his personal capacity. View all posts by Adam Haupt →