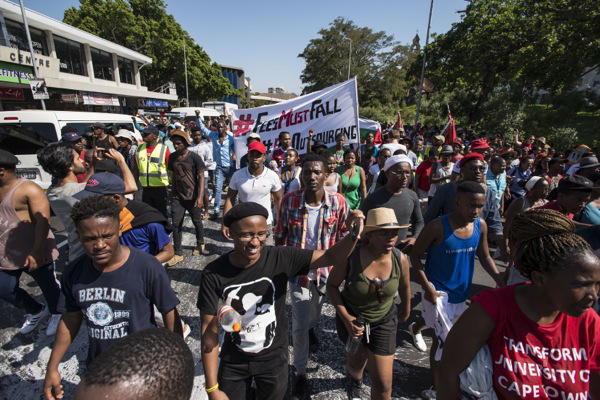 The current student-led protests across various institutions in the country have produced divergent responses. All the analysis from various experts and citizens has attempted to characterise the Fees Must Fall movement. Conservative commentators have argued that the students have no work ethic nor discipline; while other groups have supported the students. The latter perspective recognises that South Africa is one of the most unequal societies in the world, and that the proposed tuition increases are going to exacerbate this socio-economic, race-based inequality. While I align myself more with the second view, it is evident that both paradigms ignore some underlying structural causes of the crisis in higher education.

This is driven  mainly by the dominance of neo-liberal policy prescripts. These policies advance the following principles: minimal state intervention, individualisation of social problems, market-led development, and privatisation. The manifestation of this neo-liberal ideological hegemony is the corporatisation of higher education. This term refers to the “transforming state assets, government agencies, or municipal organisations into corporations”.

The advent of international benchmarking and assimilation towards world-class university status.

This practice informs the constant competition amongst institutions to improve their positions on global indices. We are repeatedly reminded that historically white institutions such as Wits, University of Cape Town, University of KwaZulu-Natal and University of Pretoria form part of the top 500 institutions in the world. Professor Eddy Webster has pointed out that this phenomenon is driven by the core values of the global capitalist system. Competition and the drive for better ratings ⎯ based solely on research output ⎯ inform this trend.

According to Webster, the assimilation towards world-class status shapes senior managers’ allocations of funds. In the end, universities allocate more resources to programmes that are perceived to be integral to world-class accreditation. This shifts funds away from socially beneficial initiatives, such as “redress, employment equity, academic development programmes, and funding for needy students”, which are crucial for preventing class exclusion.

More worryingly, there is an uncritical acceptance of the term “world class” without assessing its epistemological origins. This concept is not value or class neutral. It is innately linked to usurping the intellectual and socio-economic autonomy of universities in less developed countries. The universities that accept this mantra have become intellectual conduits in the reproduction of Eurocentric notions of modernisation or development, which in turn produce social inequality.

Corporatisation also supports the consistent drive to remove or decrease the role of the state in the higher education system. This is not an isolated societal trend, but rather a product of neo-liberal hegemony. Most education policy experts traced the origins of this phenomenon to the late 1970s. The most glaring outcome of this minimal state intervention is reduced public expenditure on higher education. According to the Moving Forward Report (2012), state contributions to university education in post-apartheid South Africa declined from 49% in 2000 to 40% by 2012.

The state’s expenditure on higher education (as a percentage of GDP) in SA is very low when compared to other middle-income counties. Government should definitely increase its expenditure beyond the current figure of 0.79 %. Other middle-income countries such as Ghana and India spend more on higher education: 1.44% and 1.20% respectively. This is a global phenomenon. Shrivastava (2014) points out that government funding of public higher education in US institutions fell from 80% to less than 10% in the last 40 decades.

The rise of despotic managerialism in most universities and colleges

Institutions of higher learning have been rapidly introducing authoritarian corporate models of governance and management. These managerial approaches are primarily informed by capitalist, neo-liberal goals of profit, efficiency and effectiveness. Democratic values such as social equity, redress and broad participation are viewed as being secondary. Interestingly, this corporate approach coincides with the migration of former CEOs and business elites into managerial positions in universities. These managers seek to re-orientate governance towards market despotism.

“Social relations on campus are increasingly corporatized as faculties find their time, work and the products of their labour increasingly controlled by managers, who have extended their discretion at the expense of professional autonomy and arguably the public interest”.

In my view, this new despotic managerialism is one of the core causes of social exclusion in the system. The recent unilateral determination of fee increments at most universities epitomises this approach on governance. It defends a monolithic corporate culture that is mostly based on racist Eurocentric assumptions and prejudices. Moreover, this style of management places profit and marketing the university as a brand over genuine developmental goals. New managerialism is an exclusive system of governance that erodes any possibility of creating an inclusive system of higher education. This explains the rise of protests in various institutions, which seek to challenge the negative socio-economic and political outcomes of this approach.

So what is be done?

Implement the recommendations from the Report of the Ministerial Committee for the Review of the Funding of Universities, which called for:

Government to increase expenditure on higher education as a percentage of GDP;

The introduction of fee caps;

Reviewing the current narrow transformation criteria in institutions of higher education; and

Khwezi Mabasa is a PhD Fellow at the Society Work and Development Institute (SWOP) at Wits, and a programme manager at Friedrich Ebert Stiftung South Africa View all posts by Khwezi Mabasa →