Chasing the Scream: The First and the Last Days of the War on Drugs by John Hari 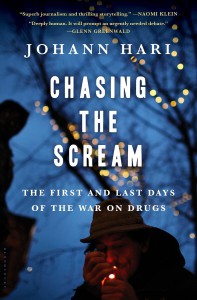 We already have regulated ways of selling two of the deadliest drugs on earth, so why not regulate the rest? Yes, by the rest I mean the big ones: weed, cocaine, heroin…

You might think I am being provocative, but this is the argument presented by Johann Hari in his book Chasing the Scream: The First and the Last Days of the War on Drugs.

Think about this for a second: “Smoking tobacco kills 650 out of every 100 000 people who use it, while cocaine kills four.” Yet the one is legal and the other is not.

Of course, the answer is complicated, which is why Hari travelled a bit – to the United States, Mexico, Uruguay, Switzerland and Canada to name a few places – trying to find out why and how drugs became illegal in the first place, and what drug reform would look like.

Hari is a skilled reporter and storyteller, something I was grateful for while reading the book. Pick up a random nonfiction book on crime, drugs or climate change, and you’re likely to be drowned in pie charts and graphs that take up too much space and explain even less.

Hari avoids graphs. Instead, he focuses on storytelling, beginning with Harry Anslinger, the American who allegedly started the “war on drugs” in the US in the early 1900s. We follow him from his childhood to his years in the police as he harasses addicts, including jazz singer Billy Holiday.

We meet drug dealers in New York fighting for territory. We learn here, for example, that the only thing that really happens when a powerful drug dealer dies or goes to jail is that the homicide rate goes up (from people fighting to control the territory left vacant), but that nothing really happens to the flow of drugs.

We meet women prisoners in a desert prison in Arizona who spend their days working in the hot sun, tied in chains like a chain gang, for different drug offences. There we meet a woman named Marcia Powell. For punishment, she was put in an exposed cage in the desert. “Her internal organs had cooked, as if in an oven,” writes Hari. She died, but the guards who did this still have their jobs.

We meet group of soldiers trained by the US as an elite force within Mexico to win the “war on drugs”. But they instead learned all they could, got the weapons, went home, and defected to work for the Gulf Cartel and called themselves the Zetas.

The cartels are brutal – “they send messages written in human flesh”. They burn people alive, chop them into pieces, shoot them in the head. All this is, of course, to protect their piece of the all-important drug route between Mexico and the US.

Hari, in trying to make sense of all this, says: “Prohibition creates a system in which the most insane and sadistic violence has a sane and functional logic. It is required. It is rewarded.”

One is reminded that alcohol was once illegal, and there was a big fight to control its flow in and out of the US. We’re reminded that once it was legalised and regulated, most of the crime surrounding it all but disappeared.

This seems to be what Hari is advocating for. If Uruguay managed to legalise drugs fully and Portugal managed to decriminilise them, and neither country has gone up in smoke, what is stopping the rest of us from following suit? This, to me, seems to be the underlying message in the book.

Hari humanises everyone, from the drug dealers and the users to the cartels and the police, as well as their families and the doctors and psychologists working with the addicts.

Ultimately, stories, including this one on the “war on drugs”, are about people. Hari does a good job of reminding us of that. He also tries to remind us that our ideas about drug addiction are dated. Not everyone who is on drugs will end up like Amy Winehouse. Most drug users live perfectly reasonable lives, albeit out of the public eye.

We meet a doctor called Bruce who describes the symptoms of addicts in recovery as minor, “at worst, like a bad flu. The real pain of withdrawal is the return of all the psychological pain that you were trying to put to sleep with heroin in the first place.”

The point, of course, is not that we should all start shooting up tomorrow, but that it might be time to have an honest conversation about drug reform, one that is based on research and not fear of the unknown.

Hari says: “We as humans are good at suppressing our epiphanies, especially when our salaries and our friendships depend on it.”

Do we want to continue living in a society where “street addicts stagger [into a clinic] with abscesses that look like hard-boiled eggs rotting under the skin, and with open wounds on their hands and legs that look like a pizza infection? It’s mushy, and the cheese you get on it is pus. And it gets bigger and bigger.”

Or do we want safe spaces for these people to go shoot up safely before getting on with their days? Places like these already exist. In Switzerland, for example, and parts of Vancouver, where these kinds of facilities exist, the number of people dying from overdoses has decreased.

If we can have a legal amount of tobacco to put inside a cigarette or the right percentage of alcohol in your wine, why not do the same for other drugs? If someone knew exactly how much cocaine or heroin they were ingesting, would the numbers for overdoses decrease?

Although Hari makes a compelling case, there are some glaring omissions in the book. Africa hardly features in the story. Even Afghanistan, the biggest producer of heroin in the world, has also not received much attention.

There’s a veritable smorgasbord of drugs in Africa, and they come in a variety of names that get more interesting by the day – whoonga, nyaope, tik, and who knows what next. We have people in all kinds of jobs who live their lives on drugs.

It would be nice to see where Nigerians, the people who have been made out to be South Africa’s drug boogeymen, feature in the complex web of the worldwide drug trade – even if it’s only so we can lay the stereotype of the Nigerian drug lord to rest. But none of this local nuance is to be found in the book.

As Hari says: “If a dogma is not working, no matter how strong and immobile it seems, you can cast it aside and start anew.”