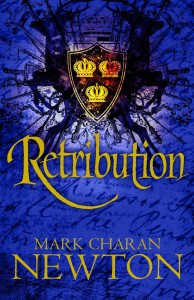 After the audacious weirdness of the Legends of the Red Sun quartet, Mark Charan Newton chose more straightforward tropes for his second series: detective stories, more alternative-historical than magical, following the career of Lucan Drakenfeld. He’s an investigator for the supranational Sun Chamber, which investigates (and interferes) across the nine-nation Vispasian Royal Union: a polity loosely resembling Rome during its Late Antiquity period, when empire started falling apart.

Roman Empire memes are rising again in SFF; they also underpin Annie Leckie’s Imperial Radch series (whose conclusion, Ancillary Mercy, is due out this month). Such polities offer writers scope to explore a world with both conservative social structures at the centres of power (in this case, Drakenfeld’s birthplace of Detrata), and multiple shades of difference at the periphery. But the Royal Union is not quite an empire. It’s a delicately balanced union somewhat dominated by its stronger members, and as those states founder, their elites see a shift to explicit imperialism as a way to restore power. Although the worlds Leckie and Newton have created are galaxies (and centuries) apart, both writers take maximum advantage of those possibilities.

The first book, Drakenfeld, got off to a slow start. Newton was carefully writing himself into the voice of his new first-person narrator and untangling a classic locked-room mystery. Retribution proves that care was worthwhile. From the first page, Drakenfeld’s voice (and through it his character) is consistent and clear. It’s possible now to get to know the man: rational, ethical, slightly pompous, always the outsider – not only through his role but because of features inherited from his desert-born mother, and his own epilepsy. Here, he also teeters on the edge of a relationship and we see what kind of companion might attract him. For tales of investigation, knowing the protagonist is important – part of the fun of the puzzle, from Sherlock Holmes to today, is second-guessing the investigator.

Drakenfeld doesn’t work alone. His colleague and muscle is Leana, a dark-skinned woman warrior from a distant outpost. In the first volume, Newton used attitudes towards Leana to subvert the Xena/Hippolyta stereotype and wickedly satirise the exoticist assumptions of colonisers. Her muscle, however, remained a stereotypical foil to Drakenfeld’s brain. In Retribution, the subversion goes much further. As more of Leana’s backstory emerges, Drakenfeld’s own liberal notions about her are also thoroughly shaken up.

As the title declares, this is a revenge mystery. Its setting, Koton, is in transition as a ruthless, modernising queen attempts to erase what she sees as the “barbarism” of animist steppe warriors by cramming the capital with ideas and objects copied from the metropolis. Once more, Newton’s sense of place proves a joy for the reader. Koton’s capital, Kuvash, is divided into an elite walled enclave of wannabe Detratans, and a run-down sprawl. There, the poor salvage new things from the waste dumped by the rich while clinging to remnants of their old lives. As the tale shows, however, neither forced modernisation nor guarded gates can really impose such a neat separation, and a set of beautifully rounded characters, especially Queen Dokuz, her daughter, and her court clerk make the contradictions live. And as the centre – Detrata – increasingly fails to hold, it seems likely Kuvash will be invaded and robbed of any chance to find its own authentic balance between old and new.

Magic and the supernatural aren’t entirely absent. Drakenfeld prides himself on rationalism and control. His distaste for his own infirmities – from epilepsy to seasickness – is rooted in their uncontrollability. But he is also often faced with truly mystifying things: not only lives, beliefs and behaviours wholly outside his experience, but apparent hauntings and objects with powers.

The tale kicks off with a missing bishop, and street fights, mutilated corpses and bloody forensics pop up regularly and convincingly enough to keep police-procedural fans happy. Yet it is the thoughtful approach to identity and justice, rather than the body count, that makes Retribution worth reading. Meanwhile, phenomena that Drakenfeld’s reasoning simply cannot explain are massing in the margins of his memoirs. It will be fascinating to see where Newton takes those in future books.