The beach has always revealed South Africa in its most naked state. During apartheid, under “Whites Only” signs, it pettily, but overtly, dictated first and second-class citizenry: Where natural beauty and access to calm waters abounded, Blacks were not allowed. In contemporary South Africa, it is used by racists like Penny Sparrow and her apologists, to suggest a dirty, ignorant sub-humanity of Black Africans. Facebook posts and tweets about “monkeys” who have sex in bushes and who do not “understand” freedom of expression are signifiers of unreconstructed and ahistorical hatred and logic.

The very use of those beaches on New Year’s Day suggest, to whiteness, that democratic South Africa is teetering on the precipice of total collapse. The segregated beach was a central character of Lewis Nkosi’s 1983 novel Mating Birds that shed light on the hypocrisy of white liberalism and the totalitarianism of the apartheid regime. In Mating Birds, the educated, but unemployed Ndi Sibiya whiles away his days on a “Blacks Only” beach. He starts an unspoken relationship characterised by mouthed words and physical revelations with Vanessa, a white girl sunbathing across the fence on a “Whites Only” beach. The physical consummation of their relationship — and its subsequent discovery — leads to Vanessa crying rape and Ndi being sentenced to death. Today, the beach is one of many battlegrounds from where the previous unspeakability of the Black experience of apartheid is being shouted out — to game changing effect, as companies have responded in recent weeks to social media outrage at racism by sacking or suspending bigots in their employ. There has been much warranted anger, and various shades of opinion, about the series of racist social media messages that started off South Africa’s New Year. Here, award-winning photographer Cedric Nunn trains his lens onto that shout, and he suggests that it is one of celebration, of exhilaration and of confirmation of a humanity that whiteness would still want to deny.  -The Editor

These photographs are the result of an invitation by friend and colleague Andrew Tshanbangu to accompany him as he began his next epic photo project, photographing ocean and beach culture on Sub-Saharan African shores. It was a special privilege to be able to join him. Clearly, with the subsequent furore that has erupted, Andrew is once again on track in responding to cues that inform his approach to photography.

What you see here is a selection of photographs made on Durban’s city-front beaches, roughly over a twelve-hour period including New Year’s eve, New Year’s day and the day after. Ever since I stumbled into a New Year beach celebration about eight years ago, I’ve hankered to return and photograph this phenomenon, and I may well continue the project in the years ahead.

Although I try to avoid crowds generally, I didn’t hesitate to respond to Andrew’s invitation because I had long appreciated and understood that New Year and the sea had a special significance in African culture, one perhaps of renewal and rebirth.

Admittedly I approached the event with some trepidation, as the last such time I had ventured onto our shores during this period had been fairly eventful and something of a culture shock. This time around was the antidote to the previous experience, and could be characterised as entirely uneventful. But I was clear from the start that I didn’t want to produce another ‘swart gevaar from afar’ type of image, I wanted to get up close and personal (as possible as that is for an introvert like myself!), and show who the people are who annually descend en masse onto South African coastlines.

I came away with the impression that what I witnessed was a great gathering of peoples who had a profound need to present themselves at the ocean to mark the changing of the years, perhaps to cleanse themselves of the accumulated detritus of the previous year, and enter the oncoming one purified and ready to absorb all the positive the future had to offer. But perhaps I’m wrong.

Why exactly people do this yearly is still not known to me. It could be that it is the only time that people have the time and inclination to do so, and that it has become a tradition of sorts. It could be that with limited budgets, visits to the ocean are far and few, so they are used to coincide with other momentous events, such as New Year.

All I know is what I witnessed and what these photographs attest to. Indeed, large numbers of people came to our ocean once again, beginning the process with a huge display of fireworks on New Year’s eve, and revelling on the beaches the following days. The beaches were crowded during the entire festive period, as Durban remains a popular destination for many who live upcountry and in our interiors.

I also know that the atmosphere was chilled, relaxed, with people friendly and considerate, which is remarkable given how crowded it was. I think there has been a considerable shift from a period perhaps two decades ago when the beaches first became truly re-integrated and people were still finding themselves. ‘The other’ was very apparent. Now, people seem very aware of who they are in relation to others. There was a sense of ownership of their space, along with respect, for themselves and for others.

We no longer easily appreciate the deleterious effect of the previously segregated beaches that kept the ‘other’ foreign and suspect, apart from maintaining an envy of the ‘other’. Photographer friend Rafs Mayet, who accompanied me on some of my time there, commented on how during the segregated period, he would look longingly at the neighbouring “whites only” beach, only to discover when the barriers were dropped, that nature had been kind by giving him the superior beach all along! We can be thankful for small mercies I suppose, and it made for a good laugh.

Integration in intimate spaces, such as on beaches, is uncharted, difficult and even treacherous, but also exciting, welcomed and humanising in freeing us from perverted social engineering of the past. We mostly muddled through this in South Africa. Huge resources went into infrastructure, such as Durban’s impressive beachfront walkways, promenades and facilities that really do serve the people from all walks of life. But the social and psychological aspect of this re-integration was largely left to our own devices. Most South Africans can largely be commended on having risen to the occasion and made it work to the best of their ability. An impeding factor for many is fear, that dark looming force that informs so much how we relate to each other. Fear has been with us from the very onset of our encounters with the ‘other’, a very real part of the settler/indigenous encounter, stoked and used by unscrupulous politicians from day one to the present.

The eThekwini Municipality had cordoned off several blocks along Durban’s prime beachfront to , prevent the inflow of huge amounts of booze onto the beach and establish some security. You could lug your own in, no problem, but you could only bring what you were able to carry those several blocks. The very visible security officers probably also helped.

I was impressed by, and not really able to photograph, the very active lifesavers who worked non-stop, marshalling the huge crowds in the water and immediately reacting to anyone in difficulty. These, overwhelmingly Black, life-guards were on paddle-skis, jets-skis and rubber dinghies and were constantly in the water and active – providing assurances to bodies and lives. 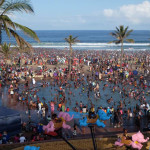 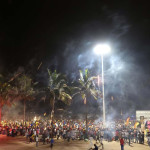 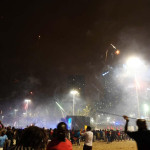 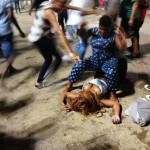 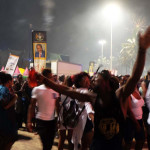 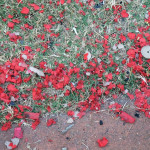 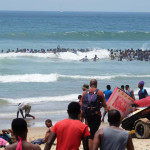 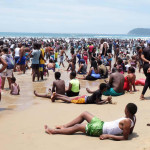 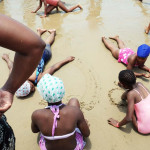 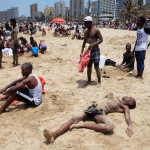 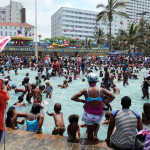 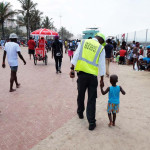 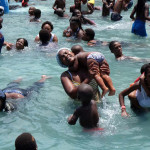 View all posts by Cedric Nunn →