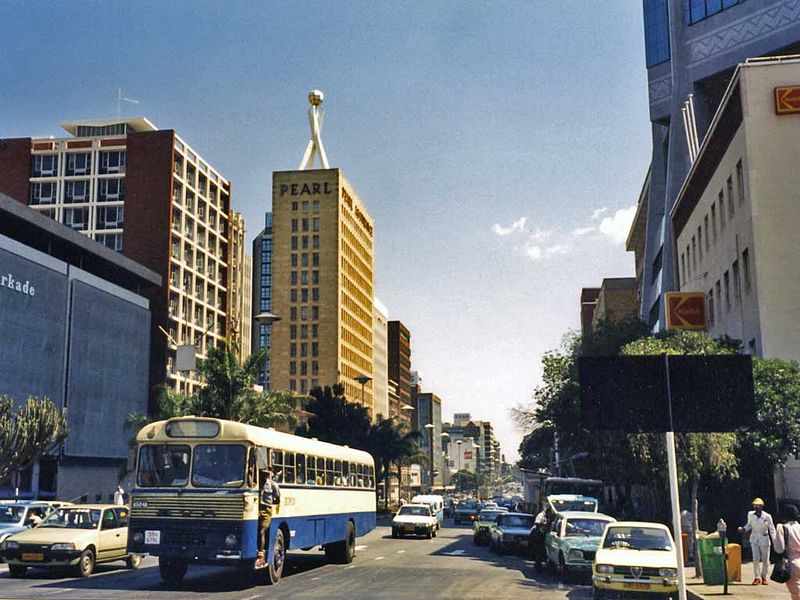 “We are the desperate

Who do not care,

No place to sleep,

Luridly painted, just one storey high, it is dwarfed by an adjacent structure. Kopje Plaza, a steel and concrete arc edifice, is at the corner of Jason Moyo and Kaguvi streets. The grey, towering Kopje Plaza, owned by telecommunications parastatal Net One, is in the foothills of the Kopje, a densely vegetated hill from where Cecil Rhodes’ dewy-eyed conquistadors, surveying the red, well-watered soil beneath, triumphantly hoisted the Union Jack in 1890.

The Kopje is, in poignant ways, the point at which old Harare meets new Harare. On the terraces of the hill you will find creaking yet stately buildings, erected when Salisbury was still young. Yet, also, in the same vicinity, there are edifices built in the late modernist styles  of the late 20th century. You will find, on this hill and its environs, street names and monuments that date back to the city’s founding conquests and the resulting contests. There is a street known as Lagos to some, testament to the presence of Nigerians, later day arrivals to the city.

Rasta, please give me some coins, he would say. In Zimbabwe “rasta” is the ready made handle for anyone with a beard and unkempt hair. It’s a word interchangeable with “fire” and “jah man,” descendants of the red-eyed hunters, hair let loose to grow into elaborate knots, who traversed this land centuries ago. Often, I reached into my wallet, took out a soiled dollar note or a R5 coin, and while my fist bumped his, would grunt some cliché rasta greeting in acknowledgement. Sometimes it would be small talk, nothing consequential, but the seed of most friendships. It’s difficult to say now why it was this gangly, copper-skinned youth whom I befriended out of five or six other tramps who also hung about that locale.

When not directing traffic, guarding automobiles and washing cars, trying to eke out coins and smudged dollars in a heartless city, they spent their days in a moonshine- and drug-induced haze. I am not throwing stones here. It’s hard enough going around this city sober as a postman, all your wits about you. Whatever helps you get through the day, don’t turn it down.

Kilimanjaro houses the contradictions you see  in Harare every day: poverty at ease with wealth. Outside the bar, there is a commune of tramps; the bar itself is popular with the working class. Beer is sold almost at cost; the only cigarettes sold in the bar – Pacific, Madison, Kingsgate and Everest – are popular with what remains of the proletariat. Don’t ask for Dunhill or Newbury here. If you walk into Kilimanjaro, on its cheap tiles, past the counter barricaded behind steel bars where the barman exchanges smudged paper notes for beer, past a narrow corridor with a concrete floor, you will find yourself in a restaurant, frequented by entrepreneurial Nigerians. Egusi, ofada and other peppery Nigerian soups, served with sadza/isitshwala/pap, are sold at $5 (about R70), way beyond the reach of the majority of Zimbabweans. At the very next building, sadza and beef, cooked in that characterless Zimbabwean style which is to say spice-less, goes for $1 (R14).

It is outside these contractions that the man I will call Marufu [for I never got to ask his name]  hung around, living through each day’s terrors,  sleeping through each night’s squalor.   There are two entrances to Kilimanjaro and when I discovered the other, on Harare street, a road named after the legend of the sleepless one himself, Harare. (It is said Harava or Harare,   a 19th century chief in these parts, would always be awake, waiting for his enemies’ dawn ambushes.)

Once familiar with this entrance, I rarely used the one on Kaguvi until one day, months later.  Arriving in the company of a friend, one of  Marufu’s friends came up to me.

I immediately knew which brother he was talking about.

Well, one day he said his chest was sore , so he spent the day sleeping there, he said pointing to a building nearby.

And the following day he didn’t rise up with us. We came here.  Later we found him dead.

Where is he now? He has been buried?

No. He is at  the morgue at Parirenyatwa hospital. Parirenyatwa is Harare’s biggest public hospital.  Alive Parirenyatwa would certainly have demanded a tidy sum and, failing to produce it, shut its gates on him, but now dead Marufu lay in its coolest section, cold air blown  at his lifeless body.

Does his parents know?

We don’t know his parents.

So does anyone know?

His uncle knows. He is arranging something.

Where did he come from?

His altered state necessitated a change in tense.

Mutare is the restive district in the mountaneous east,  close to Mozambique.

For a long time afterwards I thought about him. Every time I spoke about him it was as if I had known him. May be the sense of a needless loss was compounded by the fact that I never got to know him as a human being, to know his name,  where he had come from, what had driven him from the provinces into the epicentre of destruction.

Who sheds tears for Harare’s orphans? Boys and girls who ran away from the towns  scattered all over the plateau to try their luck in Harare. Men and women whose every waking and sleeping moment is on the gnarled asphalt and cracked concrete.  They piss there; they sleep there; they smoke there; they drink there, alas, they also die there.

Who mourns for Harare’s foundlings?  They know the city better than anyone else. Even more than the post man.  They know Harare when, during the day, she is gasping for breath for the millions.  Only they know what the sky over Harare looks like at 12 midnight, only they have seen the stars hanging above the sleepless city at 3 in the morning; and only they have seen the grin on Harare, head about to burst because of lack of sleep, when the first streaks of sun appear in the east. Only they know Harare when it’s vulnerable,  at night, when the wan city lights blinker warily over its visage.

Who grieves for Harare’s bastards? They were conceived in the heat of the moment when Harare was on heat, its vulva red and swollen; when sense is suspended and judgment has jogged away,  and then left to fend for themselves.

If no one else will grieve for Harare’s bastards, the city itself will mourn and bury its own…

This is the first of a series of stories about Harare, Zimbabwe.