uChakide, the trickster mongoose, was hungry. So he convinced uGogo Granny, to play ‘I cook you, you cook me’ in the pots over the fire. Naturally, Chakide went first into the pot and gogo lit the fire. Once it became a tad hot, Chakide called out from inside the pot “Tshiyo tshiyo sengivuthiwe!” (“I’m cooked enough now!”).

Gogo immediately opened the pot and Chakide jumped out. Gogo then jumped into the pot to have her turn. Chakide then put rocks and things on top, an ominous sign of things to come. As the water heated up, Gogo began to cry out, that she was all cooked but Chakide just ignored her. Eventually gogo was fully cooked in the pot.

At that moment, the children came home and Chakide dished the stew for them.

And so another of the children queried each piece that looked too much like Gogo. Each one dismissed by Chakide.

Eventually the children ate everything. Chakide immediately ran to the nearest hill and began mocking them “Peh peh nadl’ugogo wenu!” (“You’ve all just eaten your grandmother”).

I love this grisly story of unwitting cannibalism. It is so comedic and dark; the picture of Chakide’s hapless victims suspicious at first, but obligingly eating Gogo’s fossilised toenail in the stew. Whenever you tell this story to children, they are besides themselves with laughter at the gruesome depths of the trickery.

Like many ancient folktales, within this simple story is a profound exposition of aspects of the human psyche.

There is in this allegory a story about manipulation. But it is not a classic cautionary tale, because we, the audience, laugh along with the nasty trickster, at the victim’s misfortunes. The trickster not only gets away with it, but will live another day to trick others and giggle at their expense.

The trickster’s giggle has a powerful neutering effect; can anything be so serious or shameful if you can laugh about it?

Because they are in it only for themselves, the trickster has no qualms employing devious tactics throughout. Gogo, seemingly naive and out for a bit of fun, gets drawn into a risky game in which she relinquishes all control and pays the price.

For the children, valid skepticism and doubts are quickly diluted with a combination of lying and pressure. Personal intimacy and familiarity with Gogo does not prevent them from cannibalising her corpse. 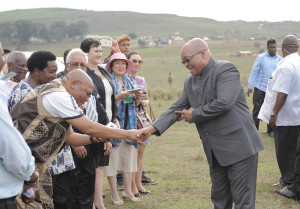 This folktale is found across southern Africa. I sometimes ask friends if they remember this story from childhood. Most of them do, and they give a little chuckle as they remember how it hit that sweet spot of their growing imaginations.

When told in childhood, the story is so sweet, even the dark elements are comical.

In adulthood, the fun is ruined. It is impossible not to correlate the story too directly with the machinations of humans.

I cannot resist drawing parallels between Chakide’s pitiless trickery and the moral decline of our Number One compatriot, from Nkandla.

With President Jacob Zuma’s parliamentary giggles, sidestepping of accountability and the recent Constitutional Court ruling which found he acted contrary to our democratic country’s founding document, it is clear that Number One has had several laughs at his comrades.

They have consistently rescued him from the jaws of political failure, yet he has consistently turned on them when it suits his own ends, especially to save his own skin.

There he is! The trickster Zuma; he has dashed to the top of a hill, where he observes his ANC comrades, in countless bids to defend him, have chewed up the last toe of the ANC. Just as the children do when they eat granny.

Zuma, the trickster looks down at the ANC MPs, the NEC, the rest of the Top Six and giggles: “Peh! Peh! Nadla umbutho wenu!” (“Peh! Peh! You just ate up your movement! ”- Shem this line just doesn’t translate well into the Queen’s English….)

The echoes of his giggling mockery reverberate across the hills, his comrades, bellies full from cannibalizing the grand movement, are at pains to accept they have been brazenly fooled.

Main Photo: Chief Giggle-a-lot – President Jacob Zuma’s trickster’s giggle has a powerful neutering effect; can anything be so serious or shameful if you can laugh about it? – Courtesy of the World Economic Forum

Take Two: While Zuma giggles in the hills, the ANC has eaten itself – From Flickr