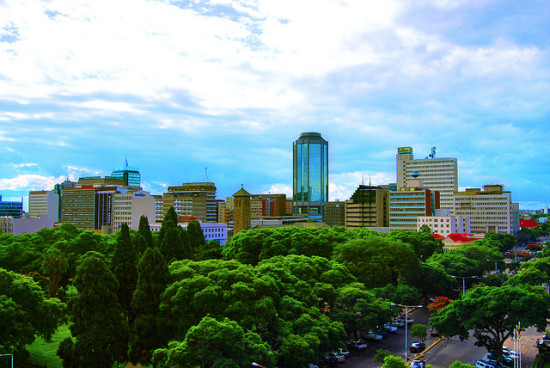 Bambazonke ( Ndebele for winner takes all), the name by which Harare was grudgingly known in Bulawayo back in the 1980s, goes back to the foundation of the city itself.

In 1900, about a decade after colonial conquest, Salisbury had a population of 1500. The upstart hamlet,  against all reason, strong opposition, and hierarchy,  became the capital city even though Bulawayo had a stronger claim.  For by the time Salisbury was founded, there had been two Bulawayos- King Lobengula’s capitals. Old Bulawayo, Lobengula’s first capital, was burnt to the ground in 1881. Just over a decade later, the New Bulawayo was razed to the ground in 1893, following British conquest.

Its streets were sparsely built–sometimes there would be a building on a street and then nothing for a few score metres; in the spaces between the buildings grass grew wild, sometimes more than a metre long. In the summer, its roads turned into “rivers of mud.” Its buildings were ugly as if, as the account by G.H. Tanser suggests, “they had been shaken out of a pepper pot.”

That’s not to say that nothing was planned, but some of the plans existed only on paper.

The Pioneer Column, Smith’s imperial vehicle, had gathered a motley crew: conquistadors, farmers, merchants and prospectors. One such prospector was Rory of the Hills, a carefree man who didn’t bath too often and who loved a drink. Once in a while, he would come into Salisbury, before returning into the bush where he looked for gold. If he found a rich reef, he would stake it out, sink a shaft, and begin to mine.

Harare, Salisbury’s successor city, has about 1,5m inhabitants. All the grassy pockets are built on the dirt tracks have since been surfaced with tarmac, now cracked and potholed. When it rains, Harare doesn’t see rivers of mud, but just rivers and lakes. Right in the city.

What’s on the ground resembles the city plans.

I bet if a blind man were to choose which city was easier to navigate, he would say the 1900s city in which Rory and his ilk roamed. There were no taxi drivers then. It’s not just the drivers who make it up as they go along–sometimes the taxi driver doesn’t even know what he will do next! There were fewer people. The city was much smaller. Rory’s spiritual descendants now populate the city, looking for gold, hawking wares.  Yet, blind man X is of this time, so he has to deal with the present, Harare’s snake-bites-what-it-doesn’t-eat brutality, its lets-populate-this-city-that-was-for-long-segregated chaos, its how-much-is-this-thing-which is met by how-much-you-got commerce.

When I first saw X, he was in a fight. People were milling about and a cop had been enlisted to help. He had staked out some space under the eaves of a giant wholesaler where he sold airtime and pens. The owner of the building didn’t want him on his stoop and was attempting to evict him. But X wouldn’t budge. In a voice wet with tears, he said he wouldn’t move, this was his spot. Tall and big-boned, he carries himself with grace. This battle, he won, for a few weeks later, he was still in the same spot, hawking his airtime.

People walk up to him with soiled notes. He reaches out, takes the note, puts it away in a pocket on his colourful apron, and then gives out the airtime vouchers. There are three cellphone operators and the vouchers come in $1, $5 and $10 denominations. If you are not aware that the vendor is blind, he gives few clues. How does he do it? How has he been able to tame the benighted beasts that roam the city of eternal sunshine? I am standing next to him. I have bought some household appliances and I am waiting for a delivery van. A greying woman just bought some airtime from X. She notices my quiet bewilderment at the transaction. Is he blind, I ask her. She thinks so. She stares ahead, her gaze intense, as if prodding her memory. When her gaze recedes, it is accompanied by a story.

When one loses a sense–sight, hearing, or something else–others kick in, she begins. Once, she says, she went to visit her daughter–let’s call her Ms Moyo–who teaches at a school somewhere on the highveld. One of her daughter’s colleagues was blind. She was introduced to him and had a brief conversation, not more than three minutes long. Some months later she was on a bus on her way to her daughter’s school and notices the blind teacher–let’s call him Mr Mpofu–board the bus. “Mr Mpofu, how are you?” she calls out. Silence. And then after a brief while, he says “Ah, Mrs Moyo, how are you?”

From that brief encounter months earlier, the woman says, her voice had been warehoused in an oral bank in which a million other sounds were kept. When Mrs Moyo’s voice rang out, it rushed in headlong into that cauldron, was sifted and returned with a positive identification.

I look at X again and marvel. He was able to see when he was an adolescent, I learn. He used to wear those thick spectacles, someone says. Maybe the fact that he used to see helps. Maybe it doesn’t. For having been used to seeing, it must be doubly difficult to imagine things, to feel soiled money, to tentatively stroke the tarmac with his cane.

By using intuition, touch and collaborating with the sighted, X is able to run his enterprise. You hand him money and say, I want $2 airtime. He will ask, as if his Maths is dodgy, so how much is your change? If you have given him $5, you will say $3. If you have handed him $10, he will delay for a moment and wait for you to say, but I want my change. And then he will say, nonchalantly, how much do I owe you? His neon apron is well ordered: there is a compartment for various notes and vouchers. In the event of difficulty, a rare thing indeed, the shop assistants nearby come to help.

19th century Rory of the Hills would be proud of his blind descendant, this blind prospector still looking for hidden riches in Bambazonke country.