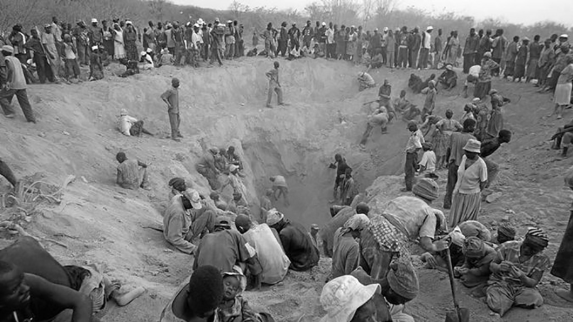 The phrase “resource curse” has been used to describe a state of affairs in which a mineral-it is usually a mineral-that should benefit a country becomes the chief means of its damnation. Think of petroleum in Nigeria; and diamonds, coltan and other minerals in the Democratic Republic of Congo. In recent years, Zimbabwe has been added onto that roll call when, in 2006, diamonds were discovered in  Chiadzwa, Marange District, in the country’s east.

Nodding at Sierra Leone, where the phrase “blood diamonds” was routinely used, the Zimbabwe’s security forces dealt with informal miners and black market dealers in the exploitation of rough diamonds and the looting of a national resource. The formalisation of diamond extraction in 2010 didn’t improve the situation on the ground other than institutionalising  even more looting and abuse of human rights.

Facets of Power (Wits University Press), a book edited by Richard Saunders, an associate professor at York University, Toronto, Canada and Tinashe Nyamunda, a post doctoral research fellow at the University of the Free State, Bloemfontein, is the first comprehensive account to look at what really happened in Chiadzwa. Below is the book’s preface:

Less than a decade after the first wave of the diamond rush and four years after Zimbabwe’s re-entry into the legitimate global diamond trade, new revelations about the looting and plunder of Marange were brought to public attention. This time, news of the theft and its staggering scale – perhaps as much as $13 billion since 2010, it was claimed – was revealed not by the usual sources of reliable critical commentary like civil society and the KP, but by the most senior official in the government which had overseen the mess in Marange.

In March 2016, President Robert Mugabe announced that the mining companies his ministers had licensed and whose concessions he had personally approved, had acted like robbers, engaging in ‘swindling’ and ‘smuggling’, and making off with the lion’s share of Marange’s diamond wealth. Less than $2 billion of the more than $15 billion which was esti- mated to have been earned by diamond mining firms since 2012 had been remitted to government, the President said.

On his telling, government had been shocked to learn of the missing funds, had no idea of the scale of the systematic subterfuge and was therefore moving to take charge of the situation. The lesson learned, President Mugabe concluded, was that private companies could not be trusted with valuable public resources, and that direct state control of mining was the solution. Thus government’s announcement in 2016 that it was nationalising all mining operations in Marange and bringing them under a single entity, the Zimbabwe Consolidated Diamond Company, in which the state would maintain a 50 percent controlling shareholding.

For veteran Marange observers it was difficult to determine which was the most incredulous claim in this latest spin on the situation: that government had known nothing about the looting of the diamonds; that it was unaware of where billions in diamond wealth had been parked, and by whom; or that direct state control of the diamond fields was the solution to the problem of corruption and theft.

Since the June 2013 publication of a report by Parliament’s Portfolio Committee on Mines and Energy led by ZANU-PF MP Edward Chindori-Chininga, detailed knowledge of what had gone wrong in Marange, who was responsible and what should be done to redress the problems, had been in government hands and the public sphere. The Committee’s four-year study, unprecedented in its depth of investigation, carefully detailed systematic malfeasance at the highest levels of the state – only to be studiously ignored by senior officials, several of whom were implicated in the report’s findings.

Despite compelling corroborating evidence of state-condoned criminal activity and extensive governance failures in Marange provided by the KP, civil society organisations, independent researchers and the popular media, ZANU-PF officials categorically refused to acknowledge the plunder they oversaw in the diamond fields; much less, take meaningful steps to redress it.

So government’s sudden turn in 2016 towards acknowledgement of wrong-doing – even if it was attributed to others – begged the question: why now?

Here, Marange once again served as a lens into the morass of contesting interests, accumulation agendas and elite power calculations that had come to define Zimbabwe’s troubling political transformation in the 2000s. Some speculated that the forced merger of Marange’s firms was an efficient way to ‘close the books’ on years of systematic looting involving tax evasion and unremitted shared earnings at a time when production levels and profitability were sinking; others observed that the winding up of individual company stakes relieved firms of their unfulfilled financial, developmental and environmental management obligations to both government and local communities in Marange.

Few found government’s justification of nationalisation in the interests of strengthening transparency, accountability and revenue flows to be convincing; to the contrary, many saw its poor record of transparency in Marange as suggesting that state meddling had been a key factor in the dismal performance of the mining firms. From this perspective, the latest moves toward the merger of companies under the state represented a step backward, not forward:having shamelessly plundered many billions of dollars, Marange’s key beneficiaries – unnamed, unindicted, untouched – stood to be relieved of liability for their actions by the same government which had irregularly, secretively, and apparently recklessly, licensed them to operate.

Looking back on the trajectory of Marange’s mining boom from the vantage point of its implosion provides compelling evidence of the dynamics which continue to animate ZANU-PF’s diamond politics and more broadly, the party’s strategic re-engagement with donors, civil society and the private sector. As several authors in this collection have shown, refracted in the political economy of Marange’s bloodied stones were elements of state capture, elite predation and private sector collusion.

These dynamics coagulated in a toxic flow of systematic, shared profiteering. There is now little doubt about the highly lucrative nature of the diamond ventures overseen by a secretive coalition of forces, this having been confirmed by President Mugabe himself – if not yet by government’s own formal record of accounts. However, the implications of elite embedding have been less well understood by some popular groups and other stakeholders in their recent turn to engage with government. This represents a challenge to meaningful reform of the diamond sector, and to wider initiatives aimed at leveraging greater transparency and participation from government through processes of re-engagement.

In the wake of the July 2013 elections which saw ZANU-PF resume unilateral control of government, some mining stakeholders argued that closer co-operation with the state was the most appropriate way to pursue reform of the diamond sector; a view echoed and reinforced by donors’ calls for re-engagement with the ZANU-PF government.

Some optimistically saw government’s 2016 Marange merger announcement in this context, taking at face value government’s assertion that nationalisation would enable greater transparency and public benefit from diamond re- sources; and seizing upon provisions in the 2013 Constitution pertaining to community rights to resource sharing, as the basis for fruitful future engagement with the state. Others, including some community organisations based in Marange, and groups and individuals who have led challenges to government’s handling of Marange since the early days of the diamond rush, were more sceptical.

Moreover, some organisations argued, without the redress of important outstanding grievances arising from 2006-2015, including compensation for lost properties, livelihoods and lives, there could be no meaningful engagement of gov- ernment as a development ‘partner’. Others argued that it was illogical, if not fantastical, to expect elites embedded in highly profitable forms of accumulation to simply abandon them by choice: promises of transparency needed to be measured against the reasonable likelihood that they could be delivered upon, not the appeal of the rhetoric by which they were made. In the emerging diversity of opinion on the best way forward, splits and divisions among and within key civil society constituencies – reinforced by the funding prowess of donors and the patronising power of the state – threatened to unwind the coherence and power of a civil society sector which had been forged and hardened in the long struggle for diamond justice.

Marange’s recent past provided a number of important illuminations for the road ahead. If the arc of the alluvial diamond experience demonstrated the creative capacity of an elite to preserve and expand its power in opportunistic coalitions with partners, it also underscored the importance of challenging that elite on terms of one’s own construction.

Over several years of confrontation with government and mining companies – in the KP, Marange, ARDA Transau and elsewhere – civil society and community organisations repeatedly achieved important gains by strategically defining their own terms of engagement, and challenging government and companies to agree to these criteria as a means for demonstrating good faith and moving forward.

The Marange experience suggested that engagement unaccompanied by solid evidence of transparency and good faith on the part of elites risked a backslide by civil society and community negotiators into concession and appeasement. The flip side of this observation was equally important: the setting of criteria for good faith, making of demands derived from one’s own agenda and offering of concessions in demonstration of one’s own commitment to engagement, were constructive, creative and empowering processes in their own right. Evidence from both facets of engagement with elite interests in Marange pointed to a final critical lesson: community trust in future engagement cannot be built without a meaningful, transparent, actionable account of the recent past. In Marange, illuminating the shadows of the past will be needed before the rocky path ahead can be seen; we must return once again to the beginning, to chart the best way forward.